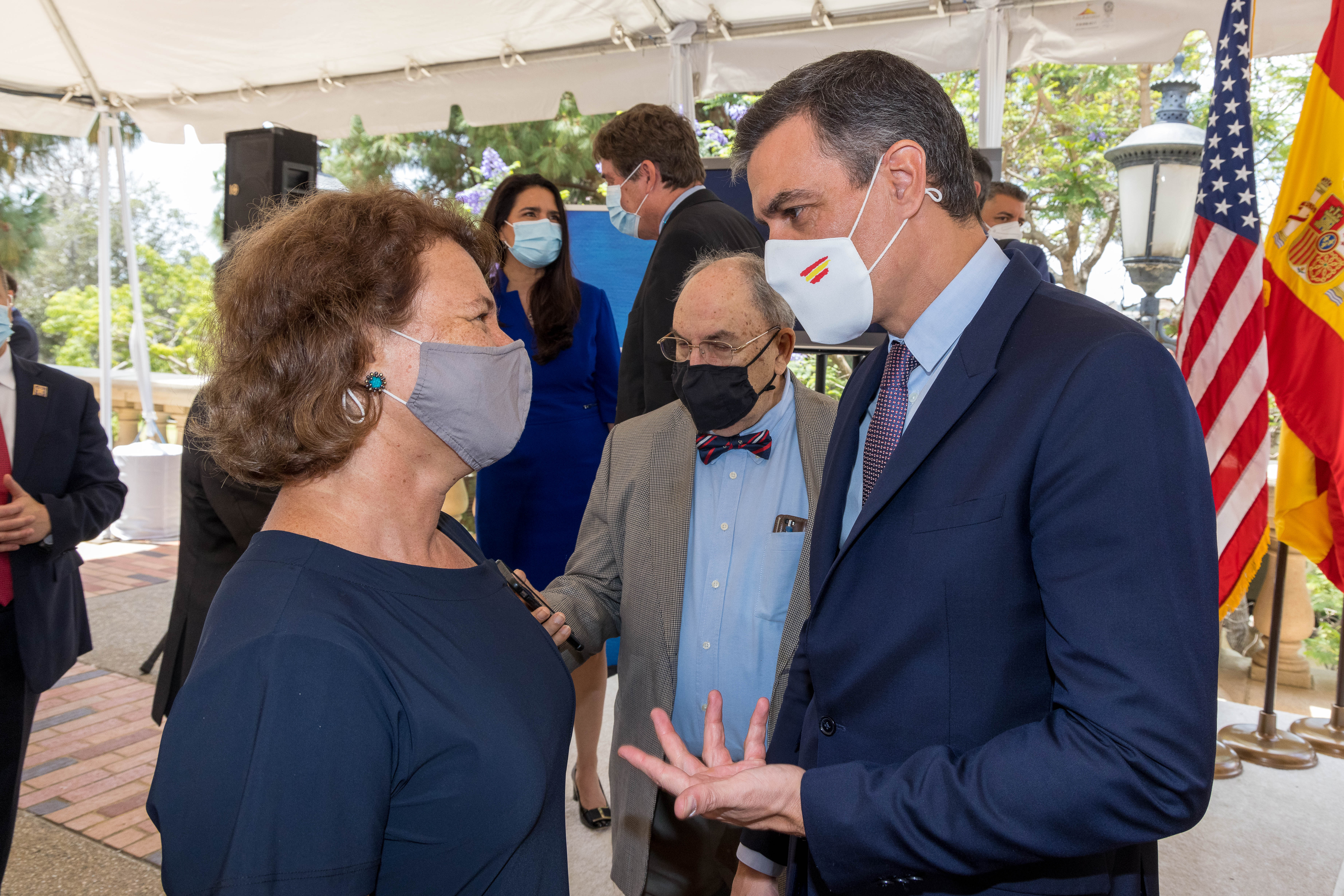 The Cervantes Institute, a Spanish government agency dedicated to promoting Spanish around the world, has chosen Barbara Fuchs, UCLA professor of Spanish and English, to receive its inaugural Ñ Prize, honoring her work disseminating Spanish language and culture through theater and literature.

The president of Spain, Pedro Sánchez, will join Fuchs on July 22 at UCLA as part of an event to announce the first Instituto Cervantes branch in Los Angeles, which will be the seventh such center in the United States. In October, Spain’s King Felipe VI will present the bronze Ñ Prize to Fuchs in person in Madrid.

Fuchs, a professor in the Spanish & Portuguese department and also the English department, currently serves as president of the Modern Language Association. She has served as the director of the UCLA Center for 17th- and 18th-Century Studies and UCLA’s William Andrews Clark Memorial Library. In 2014, she founded Diversifying the Classics, an initiative to promote awareness and appreciation of Hispanic classical theater.

“In a region with 4 million Spanish speakers, there was nevertheless a sense that ‘the classics’ still primarily meant Shakespeare,” Fuchs said. “But the classics come in different flavors. In addition to Shakespeare in the park, we can have Lope in the park and Sor Juana in the park. It will be incredible to have a partner like the Instituto Cervantes to collaborate with in Los Angeles.”

The July 22 event will be opened by UCLA Chancellor Gene Block.

“I am proud of the rigorous and creative work of Professor Fuchs,” Block said. “She has brought much-needed awareness of the richness and depth of Hispanic classical theater and helped make that important cultural heritage accessible to our communities.”

“We’ve offered performances after which a Latinx student will ask us, ‘Why did I never hear of this in high school?’ That’s heartbreaking,” Fuchs said. “Spanish isn’t just the everyday language for the home, it’s also the language of art and culture. In the U.S., conversations about diversity in theater and the classics have primarily been about who performs the plays, but they should extend to what plays are presented.”

The Cervantes Institute’s Ñ Prize is granted to individuals or institutions that have promoted Spanish in the world or have a career of special dedication to its international dissemination.

Fuchs’ research played a vital role in a 2019 Instituto Cervantes exhibition in Madrid, said the institute’s director, Luis García Montero. The exhibition featured women writers during the Spanish Golden Age in the 16th and 17th centuries, and Montero praised Fuchs’ historical research as a “fundamental reference” for the exhibition.

“Looking back has allowed Barbara Fuchs to teach us a lot about our theater, the benefits and difficulties of multiculturalism, our relations with the Anglo-Saxon culture, the picaresque and the presence of women — an essential look to complete the truth of our history,” Montero said.

Fuchs’ publications include “Passing for Spain: Cervantes and the Fictions of Identity,” “Exotic Nation: Maurophilia and the Construction of Early Modern Spain,” and “Knowing Fictions: Picaresque Reading in the Early Modern Hispanic World.” She is co-editor of “The Golden Age of Spanish Drama” and “Representing Imperial Rivalry in the Early Modern Mediterranean,” among other works. She has translated into English 11 comedias, eight of them with the UCLA Working Group on the Comedia in Translation and Performance. She is also the author of multiple articles on the literature and culture of early modern Europe, with a transnational focus.

In addition to her work as a translator, she has served as editor of Hispanic Review and, since 2017, as editor of the series, “The Comedia in Translation and Performance.” Fuchs taught previously at the University of Washington and at the University of Pennsylvania, and has received numerous fellowships, including from the Guggenheim and Andrew W. Mellon Foundations.

Editor’s note: This story was updated July 22 with pictures from the event.

This article, written by Alison Hewitt, originally appeared in the UCLA Newsroom.