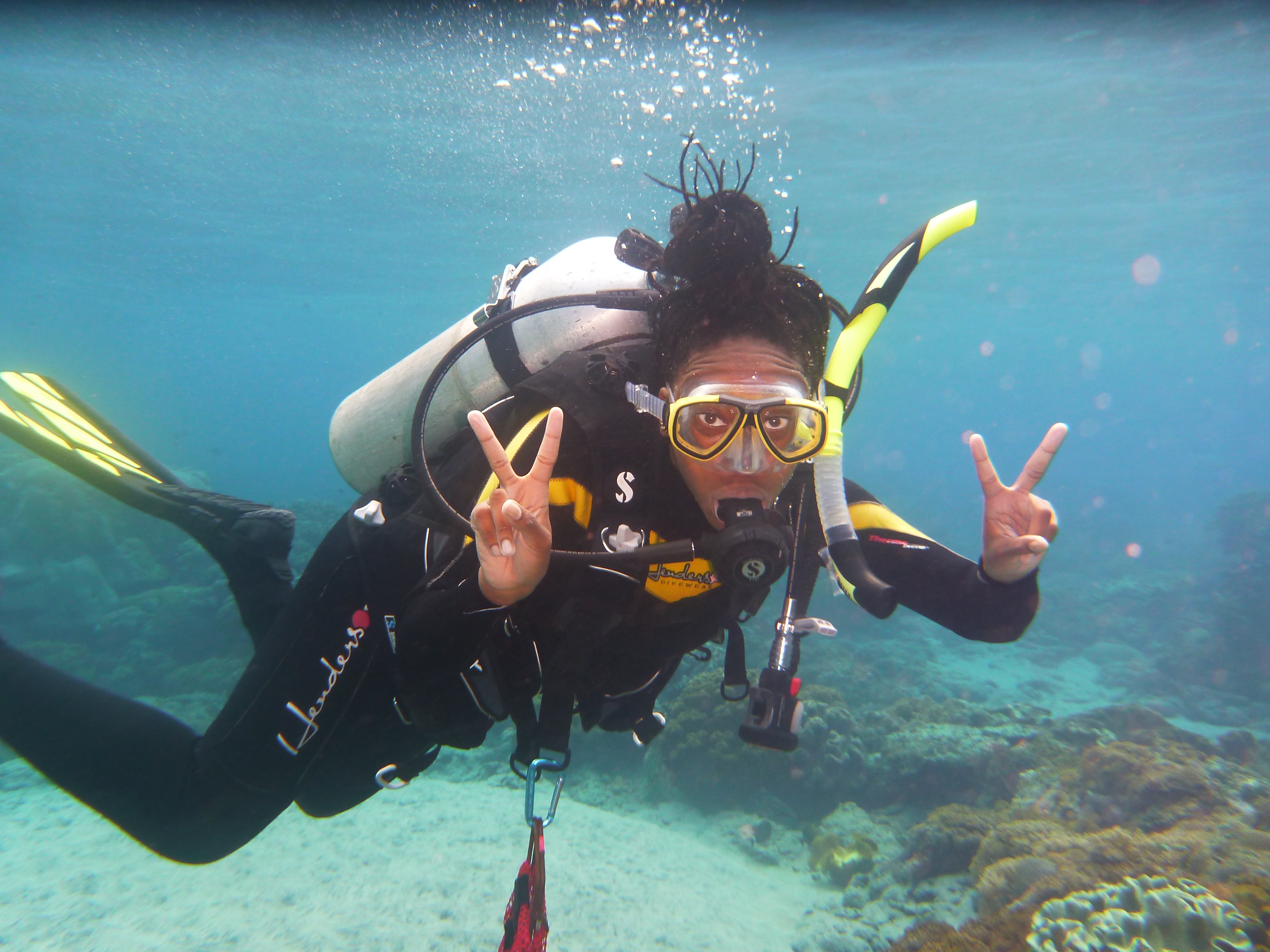 Together, we can heal the oceans.

This belief led Camille Gaynus to earn her Ph.D. in biology from UCLA in 2019. There was an equally important mission to tackle: diversity in the sciences. “When I think about science, it’s not just about the methodology; it’s about getting it to the populations where it’s needed.”

A lifelong swimmer, Gaynus has always been in her element in water. During a high school summer internship, the Philadelphia native learned about Marine and Environmental Science (MES) and knew she’d found her calling. Enrolling in the MES program at Virginia’s Hampton University, a Historically Black College or University (HCBU), sealed the deal.

The summer after junior year, Gaynus jumped at the chance to get SCUBA-certified in Indonesia through a UCLA-HCBU program called The Diversity Project/Pathways to Ph.D.s in Marine Science.

That experience, coupled with meeting Professors Paul Barber and Peggy Fong, led her to apply to UCLA’s Ph.D. program and work in Fong’s research lab. While at UCLA, her field research took Gaynus to the coral reefs of Moorea, French Polynesia. Closer to home, she tutored youth at Inglewood’s Social Justice Learning Institute. “I remember talking to the students about nature and the ocean. With the ocean being in their backyard, I naively thought they must visit all the time.”

To introduce the kids to the world outside their neighborhoods, Gaynus raised a grant and organized a field trip to the UCLA Mildred E. Mathias Botanical Garden. After a tour of the campus, Bruin graduate students joined the high schoolers for lunch to share their college experiences. Determined to get the word out even farther, Gaynus gave talks at K-12 schools throughout Los Angeles, scuba gear in tow.

Gaynus was awarded the UC President’s Postdoctoral Fellowship in 2019 and joined the University of Pennsylvania’s post-doctoral program. This summer, she’ll be stepping into the role of lecturer at Penn State Brandywine. Her other mission is still going strong, too.

Over a conversation with Dr. Tiara Moore, Ph.D. ’19, a fellow classmate from Hampton and UCLA, the duo shared frustration over being two of only a few people of color in their field. “It started off as, ‘We want our colleagues to know we’re here, and we want a space where we can just exist as Black marine scientists.” Black in Marine Science (BIMS) was born.

Initially, BIMS was slated as a week of events featuring Black marine scientists. BIMS success saw Gaynus and Moore using the leftover funds to establish it as a nonprofit. Budgeted, too, was money to pay honoraria to minority academics asked to speak on panels. And then there was the launch of BIMS Bites, a YouTube channel where Black marine scientists share nuggets of marine science knowledge. On the horizon… “We want to create a BIMS Institute,” Gaynus says. “A marine research space for Black marine scientists, along with a large citizen-science program for people in the community.”

Gaynus and Moore also created A WOC (pronounced A Woke) Space, a place for women of color to support one another and address areas such as the workplace where they’d like to see change. “One thing that unites us is seeing a problem and trying to be a part of the solution,” Gaynus says. “We really want to help women of color, and Black marine scientists, to survive and thrive.”

Reflecting on her journey, Gaynus can’t help but notice a theme. “When I look at the things I’ve done — like Black in Marine Science and A WOC Space — I feel they’re all about one thing: uniting.” Mission accomplished.