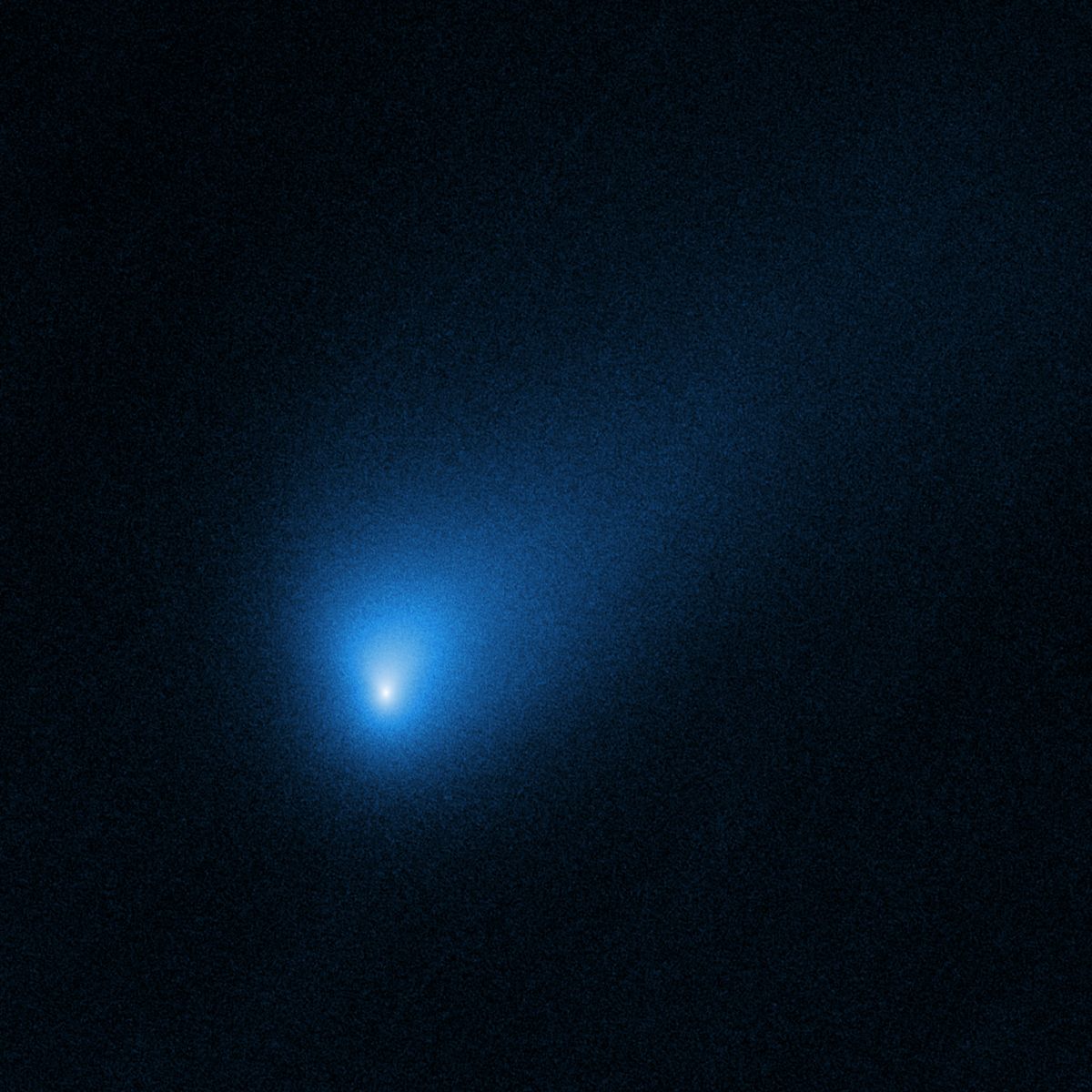 The comet 2I/Borisov, as seen on Oct. 12 with NASA’s Hubble Space Telescope. Scientists believe the comet is from another solar system. Photo credit: NASA, ESA and David Jewitt/UCLA

David Jewitt, a UCLA professor of planetary science and astronomy, has captured the best and sharpest look at a comet from outside of our solar system that recently barged into our own. It is the first interstellar comet astronomers have observed.

Comet 2I/Borisov (the “I” stands for interstellar) is following a path around the sun at a blazing speed of approximately 110,000 miles per hour, or about as fast as Earth travels around the sun. Jewitt studied it on Oct. 12 using NASA’s Hubble Space Telescope, which captured images of the object when it was about 260 million miles away. He observed a central concentration of dust around the comet’s solid icy nucleus — the nucleus itself is too small to be seen by Hubble — with a 100,000-mile-long dust tail streaming behind.

Jewitt said it’s very different from another interstellar object, dubbed ‘Oumuamua, that a University of Hawaii astronomer observed in 2017 before it raced out of our solar system.

“‘Oumuamua looked like a bare rock, but Borisov is really active — more like a normal comet,” said Jewitt, who leads the Hubble team. “It’s a puzzle why these two are so different. There is so much dust on this thing we’ll have to work hard to dig out the nucleus.”

► View a 2-second time lapse video of the comet

2I/Borisov and ‘Oumuamua are the first two objects that have traveled from outside of our solar system into ours that astronomers have observed, but that’s because scientists’ knowledge and equipment are much better now than they ever have been, and because they know how to find them. One study indicates there are thousands of such comets in our solar system at any given time, although most are too faint to be detected with current telescopes.

Until 2I/Borisov, every comet that astronomers have observed originated from one of two places. One is the Kuiper belt, a region at the periphery of our solar system, beyond Neptune, that Jewitt co-discovered in 1992. The other is the Oort Cloud, a very large spherical region approximately a light-year from the sun, which astronomers think contains hundreds of billions of comets.

2I/Borisov was initially detected on Aug. 30 by Gennady Borisov at the Crimean Astrophysical Observatory, when it was 300 million miles from the sun. Jewitt said its unusually fast speed — too fast for the sun’s gravity to keep it bound in an orbit — indicates that it came from another solar system and that it is on a long path en route back to its home solar system.

Because the comet was presumably forged in a distant solar system, the comet provides valuable clues about the chemical composition and structure of the system where it originated.

2I/Borisov will be visible in the southern sky for several months. It will make its closest approach to the sun on Dec. 7, when it will be twice as far from the sun as Earth is. By the middle of 2020, it will pass Jupiter on its way back into interstellar space, where it will drift for billions of years, Jewitt said.

Comets are icy bodies thought to be fragments left behind when planets form in the outer parts of planetary systems.

In separate research that has not yet been published, Jewitt is part of a team that has identified 20 previously undiscovered moons of Saturn, for a new total of 82 moons. The revised figure gives Saturn more moons than Jupiter, which has 79.

The new objects are all small, typically a few miles in diameter, and were discovered using the Subaru telescope on Maunakea in Hawaii. They can be seen only using the world’s largest telescopes, Jewitt said.

The research team was headed by Scott Sheppard, a staff scientist at the Carnegie Institution for Science, and includes Jan Kleyna, a postdoctoral scholar at the University of Hawaii.