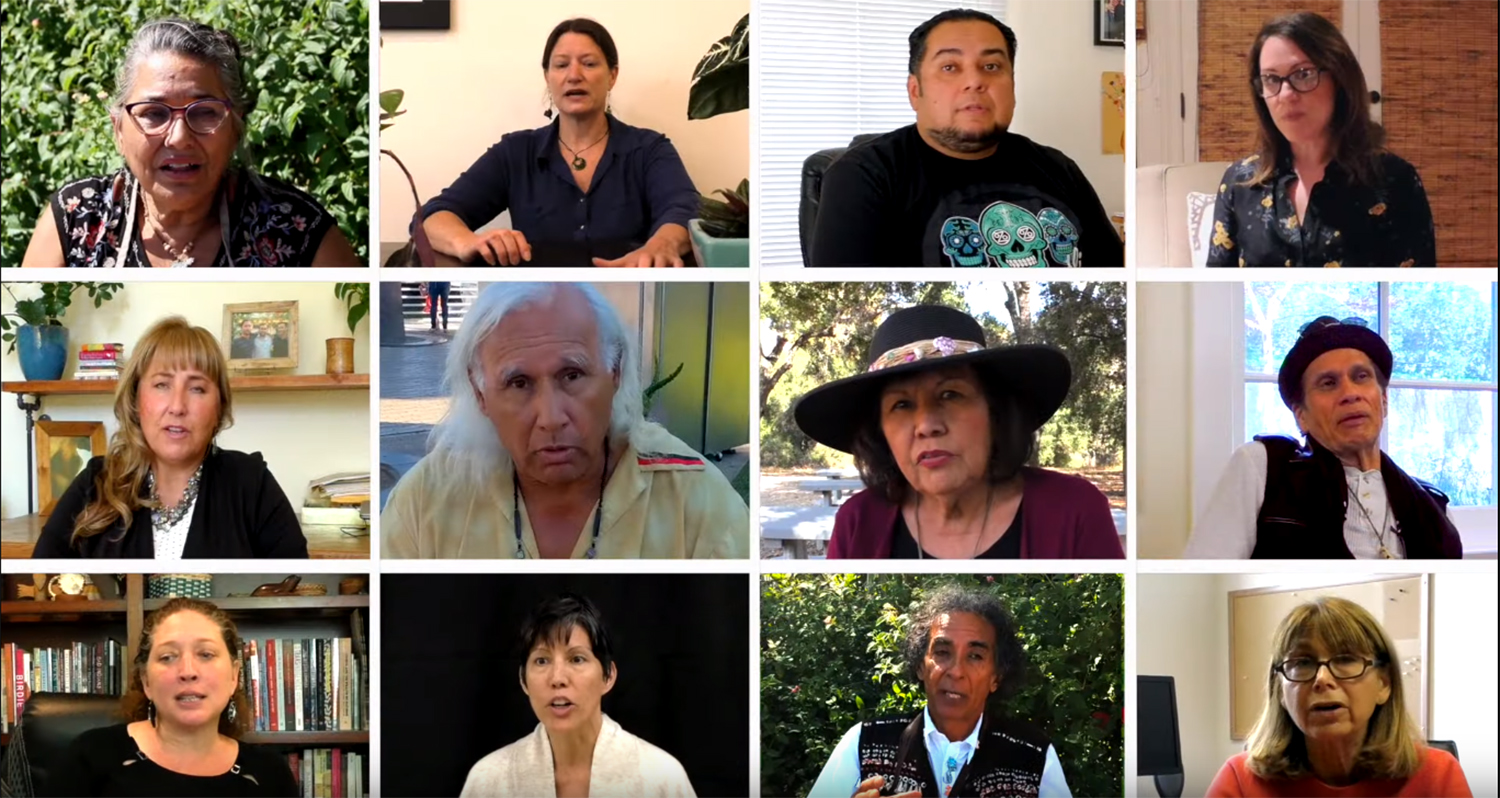 This video for Carrying Our Ancestors Home features interviews with UCLA leadership and tribal cultural heritage and repatriation practitioners.

As a quiet darkness descended over the several thousand people gathered between Royce Hall and Powell Library eagerly waiting to celebrate UCLA’s Centennial, a voice broke the silence:

“UCLA acknowledges the Tongva peoples as the traditional land caretakers of the Los Angeles basin. As a land grant institution, we pay our respects to the ancestors, elders and relations of the past, present and emerging.”

Those 15 seconds of alumna Cari Champion’s narration for the “Lighting the Way” light and projection show were a culmination of years of work and advocacy from dozens of people, including members of the Tongva community who collaborated with the UCLA American Indian Studies Center. It was also an opportunity for UCLA to demonstrate a commitment to acknowledging the history of the indigenous peoples of Southern California.

“It is an important gesture in Native tradition to ‘place yourself,’” said Mishuana Goeman (Tonawanda Band of Seneca), who in 2018 was named special advisor to UCLA Chancellor Gene Block on Native American and Indigenous affairs. “Introductions and acknowledgements place us in relationship with specific families, nations, geographies, cultural and political lineages. It is something we are taught to do from a young age as an anti-colonial tool to find connections between one other and remember that we are the result of bitter survival.”

The inclusion of the message in such a high-profile public forum — “Lighting the Way” capped the biggest UCLA Alumni Day ever — was for Goeman, who is chair of the American Indian Studies interdepartmental program and former associate director and interim director of the American Indian Studies Center, and her colleagues just a part of their tapestry of the center’s achievements.

The center’s work is not limited strictly to campus, of course. Over the years, people in the American Indian Studies Center have been at the forefront of efforts to build bridges between UCLA as an institution and members of local and state communities of people from indigenous backgrounds, especially the Gabrielino/Tongva, whose ancestors called the Los Angeles basin home for thousands of years before UCLA existed.

Shannon Speed (Chickasaw), director of the center, and Goeman were instrumental in convincing the Los Angeles City Council to replace Columbus Day with Indigenous People’s Day in 2018.

This year marks the 50th anniversary of the founding of UCLA’s four ethnic studies centers, which together make up the Institute of American Cultures. All four were launched in 1969 and designed to invest in research and projects that illuminate the struggles and uplift the experiences of people from marginalized communities.

For the American Indian Studies Center, known as the AISC, that involves embracing students and faculty from multiple indigenous backgrounds, those who continue to make up the smallest numbers in UCLA’s diverse population. Part of the AISC’s inclusive mission is to empower a strong campus community that helps recruit Native students and faculty and once here, support their academic success.

UCLA recognizes the cultural history of the region

Goeman shepherded the creation of the official statement that acknowledges the Tongva people. In August, Block encouraged all campus groups to adopt a form of the following statement at significant public events. (Click on links to hear the Tongva words spoken aloud):

UCLA acknowledges the Gabrielino/Tongva peoples as the traditional land caretakers of Tovaangar (Los Angeles basin and So. Channel Islands). As a land grant institution, we pay our respects to Honuukvetam (ancestors), ‘Ahiihirom, (elders) and ‘eyoohiinkem (our relatives/relations) past, present and emerging.

The land acknowledgment was used on behalf of UCLA officially for the first time at Bruin Day in April, an event that invites thousands of admitted high school students and their families and caregivers to campus, and the “Lighting the Way” centennial launch in May. American Indian Studies Center leaders and some campus units and professional schools had been incorporating it into their events and materials for a year before that.

“Sometimes if feels like very small steps, but they are important nonetheless, because for many decades, universities didn’t even take small steps at recognitions like this,” Speed said. “And this builds momentum for other policies and programs that consider the needs and desires of tribal communities.”

The American Indian Studies Center is hosting a conference on Oct. 15–16 titled, “Lighting a Path Forward: Land Grants, Public Memory and Tovaangar.” The first day is open to the public and includes a series of presentations on the history of land grant institutions, of which UCLA is one. Other presentations and panel discussions will highlight the state of American Indian education and consider how all of the University of California campuses can continue to forge stronger relationships with tribal communities.

A California tribal listening session includes representatives from the Gabrielino/Tongva, the Fernandeño Tataviam Band of Mission Indians, Chumash, and Acjachemen communities, as well as from the Citizen Potawatomi Nation, the Pechanga Band of Luiseño Indians and Wintu.

“We want people to come away feeling like they made new connections and collaborations around important issues, and that they understand the responsibility of land grant institutions” Speed said.

A second day of closed workshops, as part Goeman’s special advisor programming, will hopefully yield ideas for white papers that will lay the groundwork for how universities might embrace those responsibilities, by prioritizing best practices that benefits indigenous people to establishing tangible government-to-government relations with tribal nations.

For much of its 50-year history, faculty and students affiliated with the American Indian Studies Center have been deeply involved in efforts to return human remains of indigenous people to their ancestors. UCLA has been a leader in repatriations, much of its efforts led by Wendy Teeter, curator of archaeology in the Fowler Museum at UCLA and a lecturer in UCLA’s American Indian studies interdepartmental program.

The site is meant to help tribes and indigenous people navigate a process that is extremely complex and often met with resistance, Teeter said in May at an event during which she and Goeman launched the website.

In one of his final events as UCLA’s executive vice chancellor and provost of UCLA, Scott Waugh commended the efforts of the AISC to an invited audience from the Native community at that event.

“I know it is important for us to acknowledge where we are in place as well as time, to acknowledge the responsibilities of our shared history,” Waugh said. “I am also well aware that the history between Native peoples and institutions like ours can often be painful. While we cannot ignore our past, we can take steps to shoulder with respect and obligations that history places upon us. We can remember that the beauty of our state — the rivers, the ocean, mountains and deserts — was first experienced by the native and indigenous peoples who watched it before us and were the caretakers of it.”

Geography is something AISC-affiliated faculty take very seriously, knowing that Los Angeles and California are both home to some of the largest populations of humans of American Indian and indigenous descent.

Speed’s approach is to also invite students and faculty to also consider the nature of North American indigeneity at large and for scholars to confront ideas and stories about the indigenous people of Mexico and how their experiences with colonization are interconnected with American identities.

The center has offered critical support in recent years to scholars working on a web project called Mapping Indigenous Los Angeles, which seeks to tell layered stories from the city’s original inhabitants, especially the Gabrelino/Tongva and the Tataviam, as well as indigenous peoples who have come to call Los Angeles home by using digital maps and oral histories.

The AISC is about to embark upon one of its most ambitious research projects to date thanks to a $1 million grant from the National Science Foundation that will help a team of researchers affiliated with the center tackle issues of race and water.

Speed, along with professor of anthropology Jessica Cattelino and Aradhna Tripati, professor in the UCLA Institute of the Environment and Sustainability, will conduct community engaged research on water in the context of global warming in the southwestern United States.

“We’re really hoping this project brings together many disparate communities,” Speed said. “As a community collaboration project, part of what we are trying to do is decolonize the STEM field. With this research we’re bringing de-colonial methodologies into the sciences.”

UCLA physicists discover ‘apparent departure from the laws of thermodynamics’

A media-savvy celeb, Trump knows how to get coverage, journalists say

50 Years of Comparative Literature at UCLA