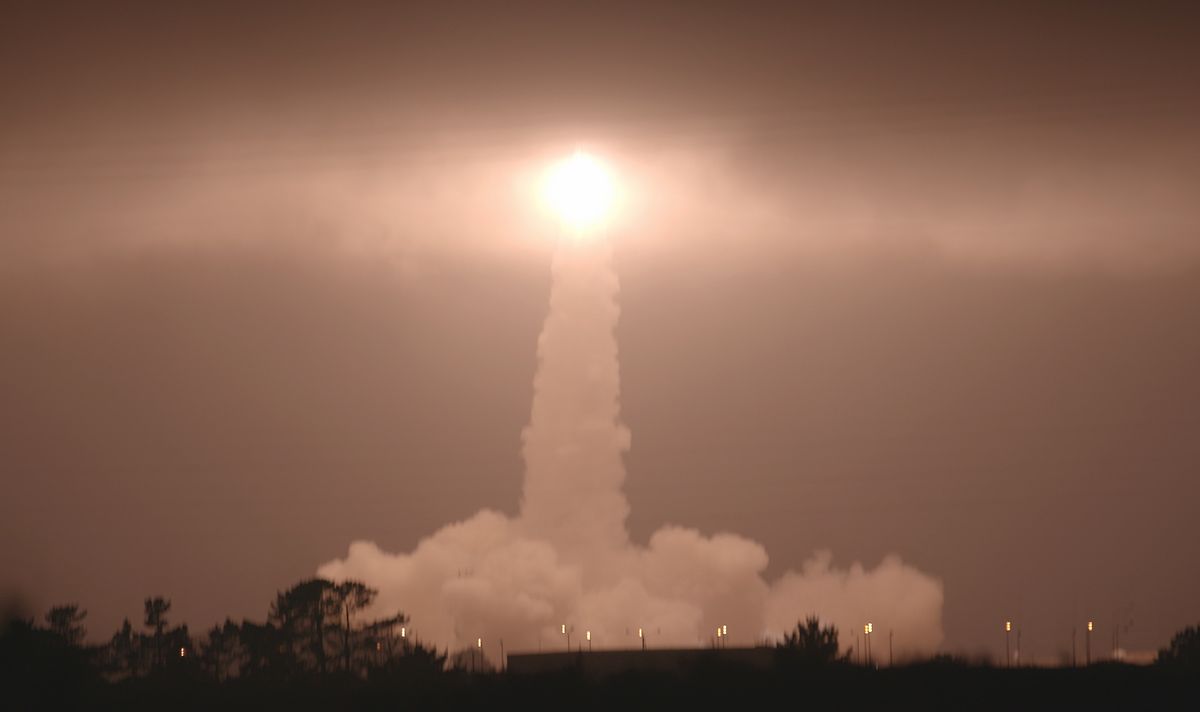 The launch of the UCLA-student-built ELFIN satellites aboard a Delta II rocket from Vandenberg Air Force Base at 6:02 a.m. on Saturday, Sept. 15.

For the dozens of UCLA students, faculty, staff and alumni braving the chilly temperatures near Vandenberg Air Force Base on Saturday morning, the brilliant ray of white that radiated across the predawn horizon was the best goodbye ever.

At 6:02 a.m. a Delta II rocket lifted off from the base in Lompoc, California, carrying ELFIN — twin micro-satellites, each weighing about eight pounds and roughly the size of a loaf of bread — into orbit aboard NASA’s ICESat-2 mission.

Saturday’s launch was the culmination of years of planning, dreaming, fabricating, designing, assembling, testing and programming, virtually all of it done by more than 250 UCLA students, most of whom were undergraduates.

Luis Frausto, 34, a 2010 UCLA mechanical engineering graduate, who worked on early prototypes of ELFIN, said he was in “total awe” watching the launch from a public viewing site near Vandenberg Middle School.

Frausto, now a design engineer at TAE Technologies, Inc., was one of more than 200 (a record for the Vandenberg public viewing site, according to a base spokesman) who braved the chilly temperatures, including about 40 UCLA ELFINers and a few of their friends, who counted down to zero as the launch went off, sending the crowd into cheers and applause.

“You can’t compare it to watching it on TV. It was like a feeling inside my chest, like I was out of breath,” said Frausto, who left his home in Irvine at 12:30 a.m. to drive the 200 miles northwest to Lompoc. “I’m here and I’m honored to be around everyone who worked on ELFIN.”

ELFIN, which stands for Electron Losses and Fields Investigation CubeSats, is designed to help scientists better understand magnetic storms in near-Earth space. These storms are a typical form of “space weather” that is induced by solar activity, including flares and violent solar eruptions. Magnetic storms can result in damage or even destruction of orbiting satellites that humans depend on for GPS, communications and weather monitoring. Space weather research is also crucial for space tourism and space exploration.

Another former ELFINer who came out was Mike Lawson, who works at the Jet Propulsion Laboratory in Pasadena on the Mars 2020 mission. Lawson slept only two hours on a couch at UCLA before he left Westwood at midnight for what he described as an “emotional” drive on U.S. 101 that included listening to David Bowie’s “Starman.”

“It’s weird. It’s surreal. It was 10 years gone in like 20 seconds,” said Lawson, who earned his bachelor’s degree and Ph.D. in geology from UCLA. The 37-year-old was one of the original ELFINers 10 years ago who worked on prototypes for what would become the satellites that launched this morning. Work began five years ago on the actual satellites that went into orbit, aboard NASA’s final Delta II rocket mission.

Jessica Artinger, an astrophysics major who will begin her fifth year at UCLA this fall, left at 1 a.m. from Fountain Valley in Orange County to make the trip. Since fall quarter 2017, Artinger has led the fabrication team.

“Watching this,” said Artinger, who prior to the launch had expected to cry but despite the dry eyes was nevertheless moved, “my time here means something.”

Louise Tamondong, who is part of ELFIN’s flight operations team, said she got chills watching the launch, which was easily visible for just a few seconds before the rocket was shrouded in thick clouds. About 10 seconds after the sky lit up, the crowd finally heard the roar of the rocket’s engines.

“It felt so unreal that everything that we worked for is going into space … it only felt real when we saw that bright light and everything going up,” said Tamondong. After liftoff, she headed back to Westwood to listen for the first signal from the orbiting ELFIN through an antenna on the roof of UCLA’s Knudsen Hall. They received a signal around 4:30 p.m., confirming that both probes survived the bumpy ride to orbit. The team will now begin commissioning the spacecraft systems and instruments to prepare for the science operations phase.

As a new Bruin, Sixue Xu wasn’t part of the team that designed, tested and built ELFIN. But the graduate student in space physics will be among those who stand to benefit from ELFIN’s work.

UCLA political science team leading the way in the study of race and ethnicity...