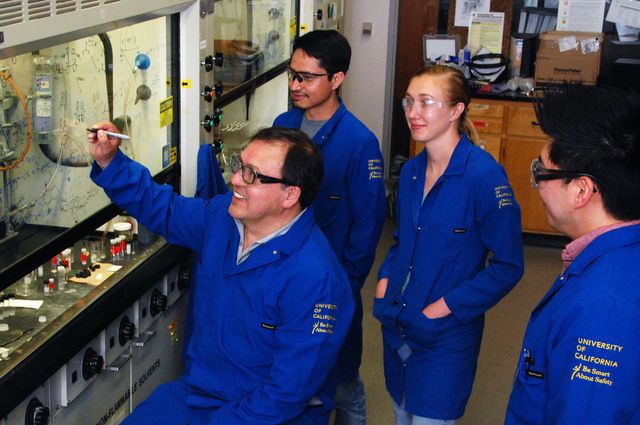 Researchers like chemistry professor Miguel García-Garibay are just a part of why UCLA excels in rankings.

“It is wonderful to see UCLA recognized for our many academic achievements and the impact of our research,” UCLA Chancellor Gene Block said. “As a world-class university dedicated to the public good, we can also take great pride in being acknowledged for the access, opportunity and economic mobility UCLA provides to students from all backgrounds throughout California and the world.”

Five other University of California campuses were among the top 12 public universities in the overall rankings: Berkeley (No. 2), Santa Barbara (5), Irvine (7), UC Davis (11) and San Diego (12).

In the overall rankings UCLA was tied for 19th with Washington University in St. Louis.

The top 18 institutions on the list are private universities, led by Princeton and Harvard, with Columbia, MIT, the University of Chicago and Yale tied for third. The publication’s methodology includes factors that tend to favor private universities, such as endowment size, rate of alumni giving and student–faculty ratio.

UCLA also shined in category-specific rankings published as part of the report. UCLA was ranked No. 1 for economic diversity among the top 25 universities, based on the number of undergraduate students receiving Pell Grants (36 percent at UCLA). In addition, the publication chose UCLA as the No. 1 public institution among the “best colleges for veterans” and No. 4 among all universities, which is up one spot from 2018.

We have liftoff of student-built satellites