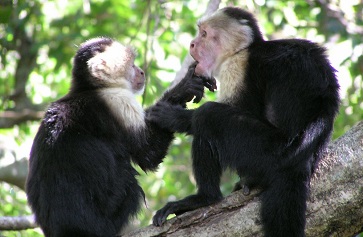 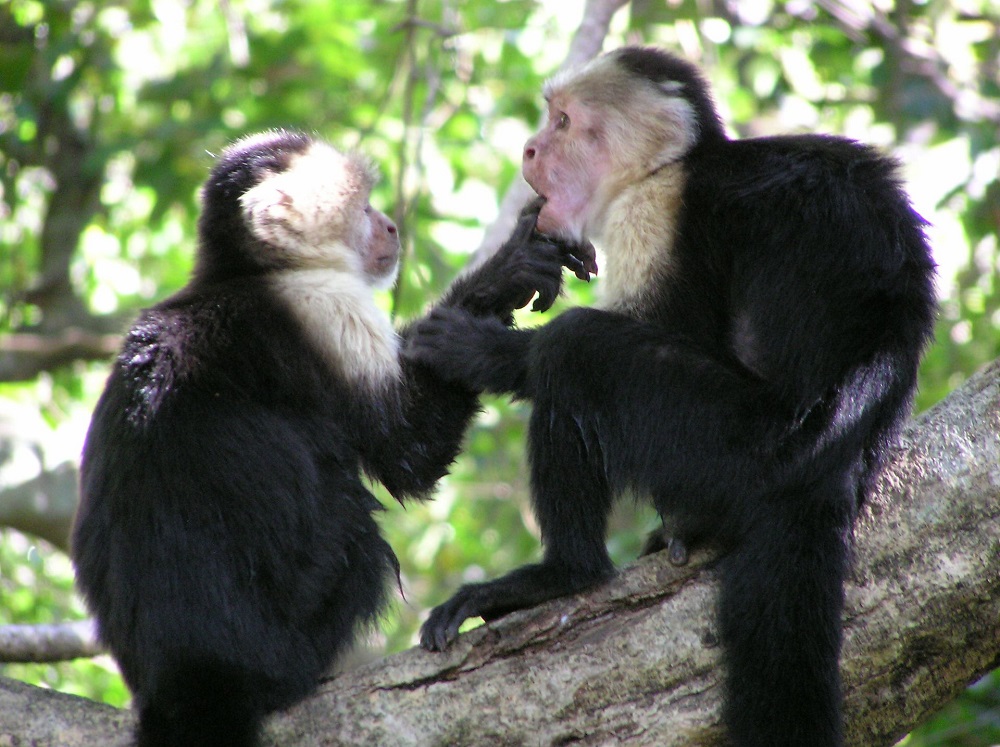 A female white-faced capuchin inserts a finger into another female’s mouth, one of several socially learned rituals. | Courtesy of Susan Perry

Key takeaways:
• Strength of female-female relationships. Female capuchin monkeys who are better integrated into social networks with other adult females tend to survive longer.
• Social interactions are helpful. These include giving and receiving grooming, foraging nearby and helping each other in conflicts by fighting or making aggressive sounds and facial expressions.
• Monkeys test their friendships. Researchers observed capuchins engaging in interactions that involve risky or uncomfortable elements — such as poking a finger into a friend’s eye socket — to test the quality of their friendships.

Female white-faced capuchin monkeys living in the tropical dry forests of northwestern Costa Rica may have figured out the secret to a longer life — having fellow females as friends.

“As humans, we assume there is some benefit to social interactions, but it is really hard to measure the success of our behavioral strategies,” said UCLA anthropology professor and field primatologist Susan Perry. “Why do we invest so much in our relationships with others? Does it lead to a longer lifespan? Does it lead to more reproductive success? It requires a colossal effort to measure this in humans and other animals.”

Perry would know. Since 1990, she has been directing Lomas Barbudal Capuchin Monkey Project in Guanacaste, Costa Rica, where her team of researchers document the daily life of hundreds of large-brained monkeys. While chimpanzees and orangutans are more closely related to humans, the white-faced capuchin monkey has highly sophisticated social structures that influence behavior and are passed to others.

Throughout the year, Perry’s team of graduate students, postdoctoral students, international volunteers and local researchers, trek into the forest for 13-hour days of observation to try to draw conclusions that may help us understand our own relationships, culture and other behaviors.

The latest findings, published recently in Behavioral Ecology, honed in on the relationship between female capuchins’ social integration and survival. The authors tracked the female monkeys’ interactions with other females, males and companions of any sex and age, based on 18 years of data. Lead author Kotrina Kajokaite earned her bachelor’s, master’s and doctorate at UCLA while working with the monkey project data under Perry’s supervision.

Their key finding — adult female capuchins who are better integrated into social networks with other adult females survive longer.

Interactions counted in the study included giving and receiving grooming, foraging nearby, and taking part in coalitionary conflicts — intervening to help one another in conflicts by fighting, chasing, or making aggressive sounds and facial expressions.

There was no evidence that heterosexual relationships provided any survival-related benefits to females, at least regarding the types of behaviors measured in this study. But this doesn’t rule out the possibility that some adult females might benefit from social interactions with one or a few male partners who co-reside with them for long periods of time.

While there is also some evidence that females who were more socially integrated into their overall group survived longer, the overwhelming conclusion from the research is that female-female relationships had the greatest impact on survival.

In a different study published in a special journal of the Royal Society, Perry’s team observed white-faced capuchin monkeys engaging in socially learned human-like rituals. Among the interactions: inserting a finger into the mouth, eye, nostril or ear of a social partner; prying open each other’s mouths or hand to conduct a detailed inspection of its contents; passing an object back and forth from mouth to mouth in a gentle tug-o-war; and clasping each other’s hands.

Other rituals observed included cupping the hand over some part of the partner’s face, sucking on an appendage belonging to the partner and using the partner’s back or belly as a drum to create loud, rhythmic noises. Some of these rituals went on for up to 30 minutes, even though some include uncomfortable elements that might be expected to annoy a partner.

How do these behaviors function in the lives of these animals and what — if anything — can they tell us about the evolution of ritual behaviors in humans?

The rituals are used to test the quality of friendships and alliances and are particularly prevalent in pairs of monkeys uncertain of the current status of their relationship, Perry said. They’re most often performed by pairs that rarely interact; the rituals are also most often used by monkeys with a history of primarily friendly interactions.

Although the capuchin rituals have nearly all the elements present in anthropologists’ and psychologists’ definitions of rituals, they differ from humans in that they are not performed simultaneously by all members of a group. Perry said the psychology behind the nonhuman primates’ bond-testing may have been an evolutionary precursor to the more group-oriented form of humans’ ritual practices.