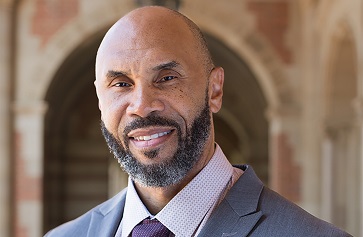 Darnell Hunt, the dean of the division of social sciences and a professor of sociology and African American studies, has been appointed UCLA’s next executive vice chancellor and provost.

“A longtime campus leader widely respected for his vision, diligence, fairness and commitment to inclusive excellence, Dean Hunt will bring considerable skills, knowledge and experience to his new role as UCLA’s chief academic officer,” Chancellor Gene Block said in a message to campus. “I am certain that his service will continue to elevate our great institution.”

Hunt, who will begin in his new role on Sept. 1, has been a leading figure on campus for more than two decades. After beginning his academic career on the sociology faculty at USC, he joined UCLA in 2001 as a professor of sociology and director of the Ralph J. Bunche Center for African American Studies. He led the Bunche Center from 2001 to 2017, and additionally served as chair of the sociology department from 2015 to 2017, before being named dean of the division of social sciences in the UCLA College.

As dean for the past five years, he has focused on supporting and elevating the social sciences and extending their reach across the academy and into the community.

Under his leadership, the social sciences division:

• expanded and continued to diversify its world-class faculty;

• established the Barbra Streisand Center for the Future of Women;

• secured a multi-year grant from the Mellon Foundation to support hiring and curricula with a focus on social justice, which was accomplished in conjunction with the division of humanities.

“Inclusive excellence and engaged scholarship are more than mere buzzwords,” Hunt said. “As EVCP, I look forward to working with campus leadership and our broader intellectual community to elevate these longstanding ideals at UCLA in concrete ways. By doing so, I know we can build on UCLA’s extraordinary contributions as one of the world’s great public research universities.”

Hunt earned his A.B. in journalism at the University of Southern California, his M.B.A. at Georgetown University, and his master of arts and doctorate in sociology at UCLA.

He has written extensively about issues related to race, media and culture, including four books and numerous articles for academic journals and news outlets. While his research expertise is wide ranging, he has developed a particular focus on issues of access and diversity in the entertainment industry. Since 2014, he has been the lead author of UCLA’s influential Hollywood Diversity Report, providing comprehensive analyses of the employment of women and people of color in front of and behind the camera in film and television.

A sought-after commentator in news media on questions of media and race, he has also served on panel discussions sponsored by the Federal Communications Commission, the United Nations, the Congressional Black Caucus, numerous colleges and universities and other organizations. The findings of his research studies have been reported in thousands of print, radio, broadcast and online media outlets throughout the United States and abroad. In 2010, he was listed among Ebony magazine’s “Power 150 Academia” for his community-engaged scholarship.

Hunt is a member of the American Sociological Association, the Association of Black Sociologists and the Council of Colleges of Arts and Sciences. He has served as a member of the Los Angeles County Commission on Human Relations Academic Advisory Board and as a staff researcher for the U.S. Commission on Civil Rights’ hearings on the 1992 Los Angeles civil disturbances.

He currently serves as a member of the Chancellor’s Council on the Arts, the campus IT steering committee and the Faculty Forward Initiative task force at UCLA, and is also a member of the UC Press board of directors. In addition, he has served on numerous campus and UC committees including the committee on diversity and equal opportunity, the committee on undergraduate admissions and relations with schools, the classroom advisory committee, the civic engagement task force, and the UC Board of Admissions and Relations with Schools, and was the recipient of the UCLA Academic Senate’s Diversity, Equity and Inclusion Award in 2011.

In his announcement, Block thanked the committee members who conducted the search and he also shared his appreciation for Michael Levine for serving as the interim executive vice chancellor and provost since last October.

“Interim EVCP Levine took up this position during a challenging period, and through it all he has remained a dedicated steward of our academic enterprise,” Block said. Levine will return to his role as vice chancellor for academic personnel in September.

In closing Block expressed his optimism about UCLA’s future as Hunt prepares to become executive vice chancellor and provost.

“Given Dean Hunt’s UCLA roots, coupled with his administrative experience and compelling vision for UCLA, I am confident that he will provide extraordinary leadership in this new role,” Block said. “I greatly look forward to working with him and the campus community to advance our shared goals.”

Seeds and Stars: Taking the Long View Toward a Better Future