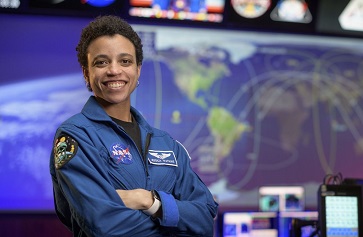 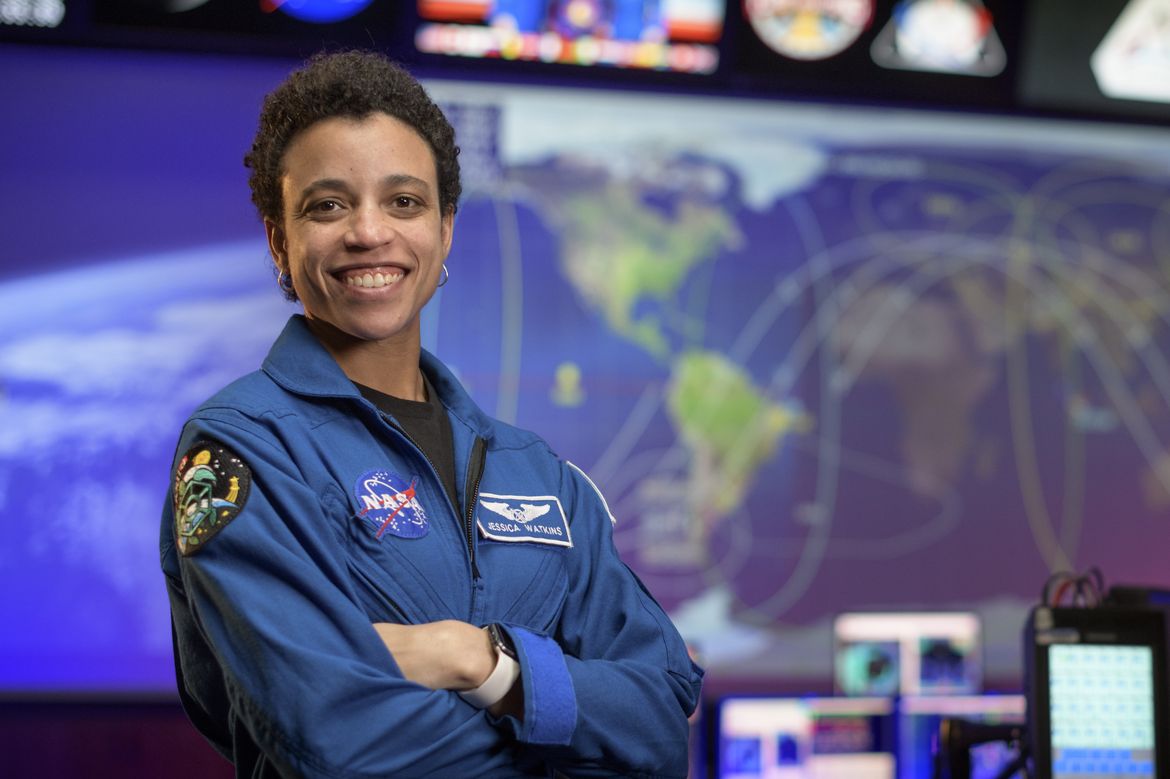 Watkins’ advice to future astronauts and space scientists: “Find mentors who can help encourage and support you along the way. Don’t be afraid to takes risks; they will certainly pay off.” Image credit: NASA/Bill Ingalls

Jessica Watkins, who earned a doctorate in geology from UCLA in 2015, will spend six months on the International Space Station as part of NASA’s SpaceX Crew-4 mission. The launch is scheduled for April 20 at Kennedy Space Center in Florida.

It will be the first trip into space for Watkins, who, as a mission specialist, will monitor the spacecraft during the flight’s launch and re-entry and serve as a flight engineer once she arrives at the space station.

The ISS is a modular research laboratory that orbits the Earth at an average altitude of 248 miles and a speed of about 17,500 miles per hour, completing 15 1/2 orbits per day. The space station’s initial module was launched in 1998 — it has expanded repeatedly since then — and the craft has been continuously occupied since 2000; Watkins will be the first Black woman to complete a long-term mission on board.

At a NASA news conference March 31, she called her role in the mission “an important milestone for NASA and the country.”

“I think it’s really just a tribute to the legacy of the Black women astronauts who have come before me, as well as to the exciting future ahead,” Watkins said at the NASA event. “Mentors have always been a force that have helped me determine my pathway. I have had many science teachers, starting in elementary school and later working in the lab, that have fueled my fire. I’m grateful for all those people in my life. I’m honored to return the favor.”

Watkins spoke more about the importance of mentors — to girls and women, especially — in an interview with UCLA Newsroom. “I would say to young girls of color, and to all young girls, dream big and continue to pursue what you are interested in,” she said. “Find mentors who can help encourage and support you along the way. Don’t be afraid to takes risks; they will certainly pay off.”

She also said she would encourage students to dive deeply into the subjects and pursuits that most excite them.

“Whatever it is that students are interested in or passionate about — whatever gets you out of bed in the morning — participate in that, study that, pursue it relentlessly,” she said. “If you want to be an astronaut, keep pursuing your studies in STEM fields, but find what it is that you are best suited for.”

Watkins earned her bachelor’s degree in geological and environmental sciences at Stanford University. She also played rugby, both as a member of Stanford’s team and on the USA Rugby women’s sevens national team. Watkins said she drew on those experiences in competitive sports throughout her journey to becoming an astronaut — and will continue to do so on her upcoming mission.

“A big part of being successful as an applicant and as an astronaut is the teamwork,” she said. “We’re headed up to ISS to live and work as a crew, and functioning as a team is a big part of what we will do up there. Being a team player, working together well, is so important.

“Also, rugby involves people of different body types and strengths. Every player has different things that are brought to the table, and all the different strengths are needed for a successful rugby team. The same is true in space. All my classmates and colleagues come from different backgrounds and have different expertise that needs to come together for a successful mission. We bring out the best in each other.”

The crew of which Watkins is a part will conduct research on how to grow edible plants and crops in space and how to improve astronauts’ health on longer space missions — reducing bone loss and maintaining muscle health, for example.

Both upcoming missions will see Watkins continue a journey that began when she first fell in love with space and science as a 9-year-old and eventually included her time at UCLA. As a doctoral candidate in the department of Earth, planetary and space sciences, Watkins studied Earth as a laboratory for understanding the geology of other planets.

“I was looking at land forms, features on the surface of Earth, doing field work, understanding the processes and then applying this knowledge to planetary surfaces, working with images and inferring what is occurring on other planets,” she said.

After her voyage to the space station, Watkins’ next mission will enable her to put that knowledge into practice in ways she could have only imagined at the time. She already has been selected for NASA’s Artemis program, which plans to return explorers to the moon by 2024. The program is one of the next steps toward NASA’s goal of establishing a sustainable human presence on the moon that will prepare the agency to some day send astronauts to Mars.