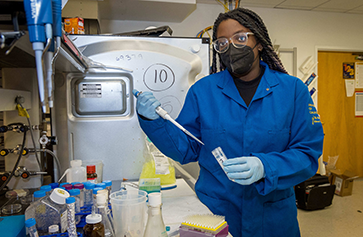 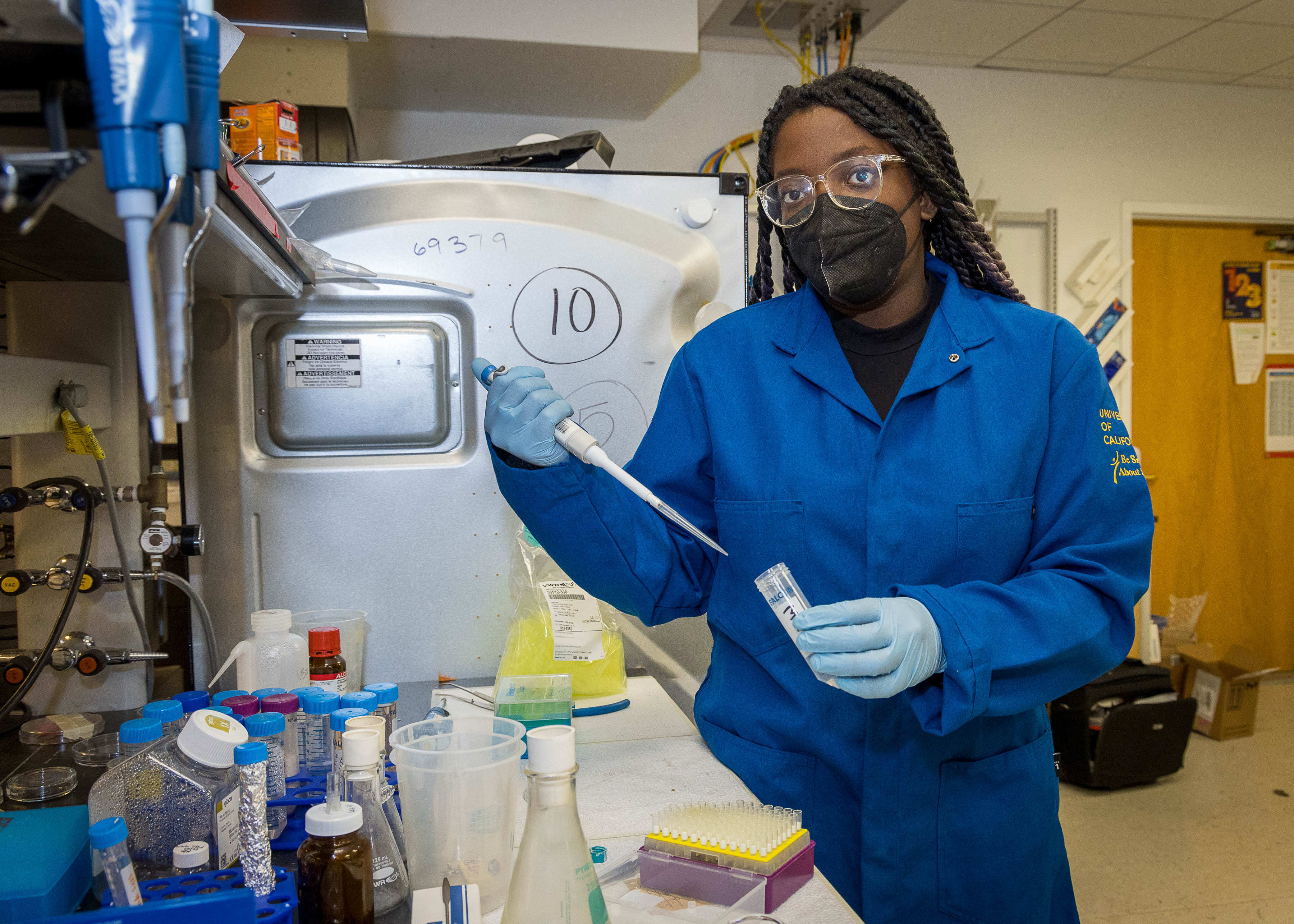 In the midst of an isolating pandemic, Mensah has put in countless hours mobilizing Black scientists and their allies via emails and Zoom meetings to build a support system for thousands of Black chemists across the United States, Canada, Africa and Europe — and helped secure about $130,000 in funding for postdoctoral fellowships.

Such is the determination of someone who has recently dedicated herself to trying to help build a fuller and more easily accessible pipeline into the STEM fields of science, technology, engineering and math. One of the most important ways to accomplish that, Mensah said, is to have more mentors with similar experiences to help guide students — and especially to help students of color and women students thrive.

That’s why in 2020, she co-founded BlackInChem, a nonprofit that helps Black chemists network with and support each other and aims to boost diversity in the sciences.

“I want to continue to be a mentor to Black people in chemistry, which is something I’m doing with my nonprofit,” said Mensah, who is working toward her doctorate in materials chemistry in the division of physical sciences in the UCLA College. “If you can’t see people who look like you doing science, then it’s harder for you to imagine yourself doing it as well — without the idea that you’re an imposter or you don’t deserve to be where you are.”

As someone committed to helping others succeed, Mensah credits her first chemistry professor for inspiring the young girl who grew up loving robotics to pursue a career as a scientist.

Karin Chumbimuni-Torres, an associate professor at the University of Central Florida, where Mensah did her undergraduate studies, proved firsthand how a woman and person of color could thrive in a field historically dominated by white men.

“She showed me what opportunities there are in chemistry,” said Mensah, who worked in Chumbimuni-Torres’ lab throughout college. “She helped me realize that I can do research as an undergraduate, present at conferences and if I work hard in a lab, that I can publish papers. She influenced the trajectory of my career in a major way.”

Now Mensah hopes to help other women and people of color recognize science as a viable career option.

“There’s a lot of us who are aching to contribute in the field, but it’s hard to because of the representation issue,” she said, referring to the lack of women and people of color in science labs. “And it really affects the future of the sciences.” 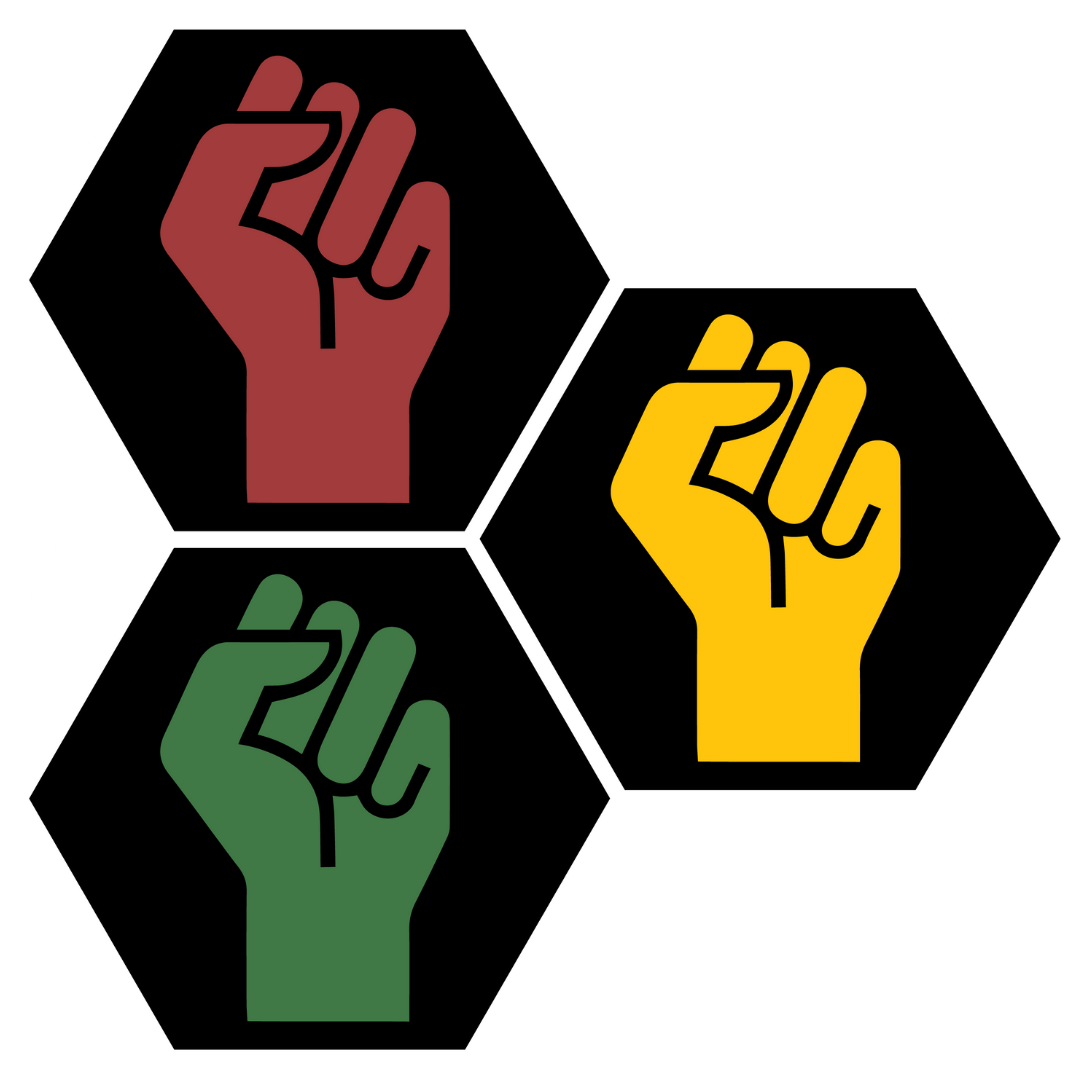 BlackInChem is part of the BlackInX network, which is made up of more than 80 groups representing STEM fields such as physics, neuroscience and science policy. BlackInX launched in 2020, after George Floyd’s death and the Black Birder incident in New York, when a white woman accused a Black bird watcher of threatening her. These incidents once again exposed the embedded racial inequalities in the United States.

“The response has been amazing,” Mensah said. “People are supporting us, not only financially but also showing up at our events and amplifying our work and the work of Black scientists.”

In February, BlackInChem and the UCLA division of physical sciences announced a travel grant members can apply for to attend the American Chemical Society Spring Conference, which takes place this month in San Diego.

And in August, BlackInChem teamed up with the Emerald Foundation, Inc., a private biomedical research organization, to offer a postdoctoral fellowship. The award is intended to help more Black researchers make the transition to tenure-track positions at top institutions.

“We realized that we don’t have a network and online community of scientists,” Mensah said. “I feel like it only helps the oppressor when those who are oppressed aren’t speaking to each other, creating fellowship, and talking to each other about their experiences.”

The sky’s not the limit

After graduating from the University of Central Florida in 2017 with a bachelor’s degree in chemistry and a minor in nanoscience, Mensah set her sights even higher. She applied to — and was accepted into — UCLA’s graduate program in chemistry. She received a master’s degree in materials chemistry in 2019 from UCLA.

“The illustriousness of the Ph.D. program attracted me to UCLA,” said Mensah, who studies biosensors that can detect neurotransmitters in vivo. “We have scholars who have accomplished amazing things. My department is not only advancing science and chemistry but advancing professional development of their people.”

And Mensah is doing her part to help a more diverse group of students tap the program’s strengths — at UCLA and beyond.

“Samantha is a visionary leader whose dedication is an example for anyone in the sciences, no matter the discipline,” said Miguel García-Garibay, dean of the division of physical sciences in the UCLA College. “Her commitment to increasing access and equity in the sciences has guided all of us to do better, from our home department of chemistry and biochemistry throughout the division of physical sciences and beyond.”

“They have been so supportive of all of my efforts and are training me to be a better scientist,” Mensah said.

At UCLA, Mensah also found inspiration in another woman — the late physicist and astronaut, Sally Ride. Ride, who took physics courses at UCLA, made history in 1983 by becoming the first American woman in space.

“I always knew about her but didn’t realize she was affiliated with UCLA,” Mensah said. “And then when I got here, I always passed her photo. There’s a Sally Ride exhibition in Young Hall with pictures and documents that I’d walk by every morning.”

“She was not only a scientist, but an LGBT astronaut,” she said about Ride. “I am still holding onto the dream of becoming an astronaut. I love her tenacity.”

UCLA boasts others like Ride, who show what can be done with education. Anna Lee Fisher, a triple Bruin who earned a bachelor’s and master’s in chemistry from UCLA, as well as a medical degree from the UCLA School of Medicine, journeyed to space in 1984.

Mensah’s path to UCLA wasn’t easy. Due to economic hardships, her family moved often, between the Dominican Republic, New York City and South Florida. Science didn’t make it on her radar until middle school, when she discovered afterschool programs ranging from journalism to theater to chemistry.

At first, she took classes after the bell rang to stall returning to her foster home. But she soon saw a whole new world of possibilities. Mensah especially loved the robotics club, where she learned how to code robots to perform tasks.

“It was my first introduction to STEM in general,” she says. “The sciences were what I was really excelling at. And once I realized I could manipulate matter on an atomic level, it was just onward from there.”

She’s never looked back. Instead, she hopes to serve as a visible inspiration to other Black women and girls who want to become scientists. Mensah channels Ride as she points out how important it is for girls to see role models in their careers so they can visualize themselves in those jobs. “You can’t be what you can’t see,” Mensah said, quoting Ride.

So, what’s next for the aspiring astronaut? After completing her doctorate, Mensah hopes to launch medical technology companies to help tackle medical issues such as heart disease, a leading cause of death in the Black community.

She’d also like to run for public office one day, so she can help advocate for STEM education and science funding.

“I remember thinking for years we need more diversity among scientists in government,” Mensah said. “And then later on, I realized that I could be the one striving toward representation.” 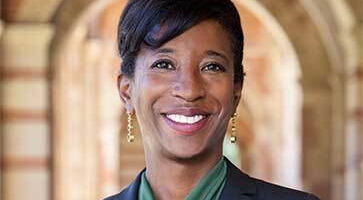 Dean Tracy Johnson honored for dedication to diversity in science 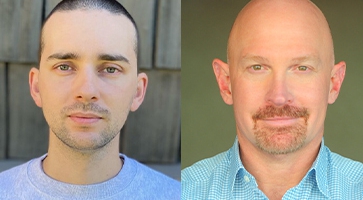 The AIDS pandemic of the 1980s and ’90s forms the backdrop for written works by two Bruins, born generations apart

Courtesy of The Walt Disney Studios