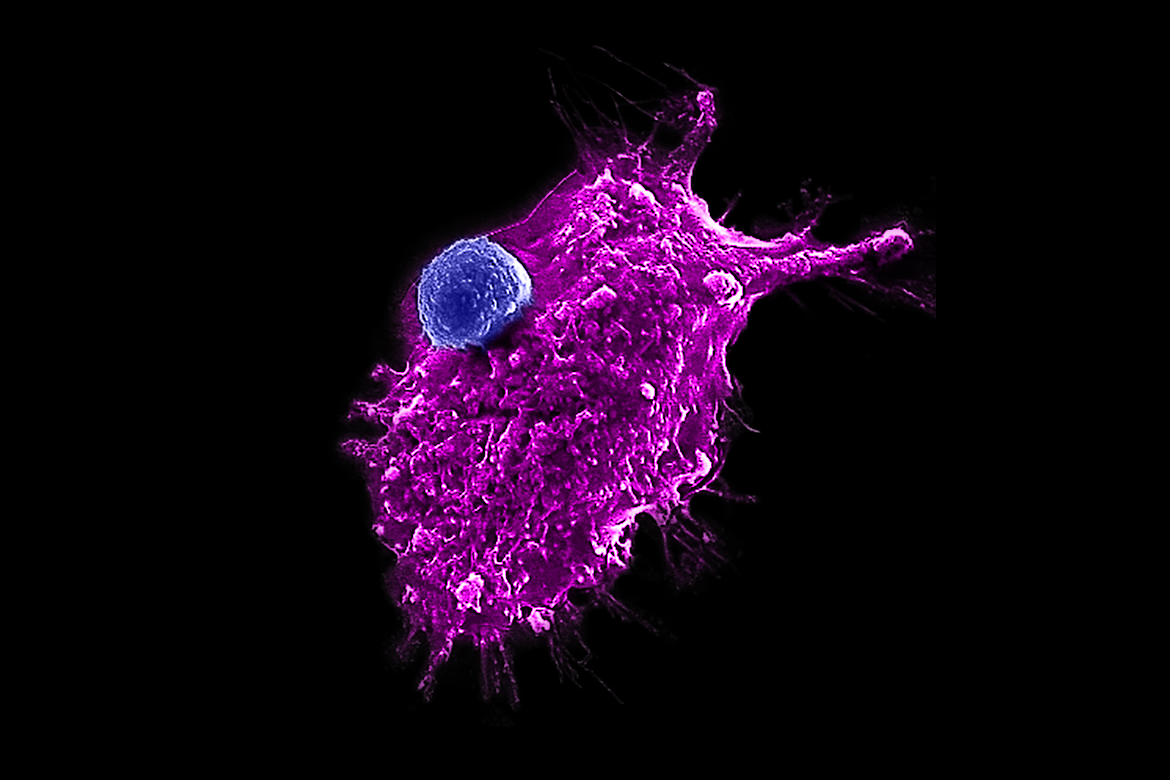 Immunotherapies, which harness the body’s natural defenses to combat disease, have revolutionized the treatment of aggressive and deadly cancers. But often, these therapies — especially those based on immune cells — must be tailored to the individual patient, costing valuable time and pushing their price into the hundreds of thousands of dollars.

Now, in a study published in the journal Cell Reports Medicine, UCLA researchers report a critical step forward in the development of an “off-the-shelf” cancer immunotherapy using rare but powerful immune cells that could potentially be produced in large quantities, stored for extended periods and safely used to treat a wide range of patients with various cancers.

“In order to reach the most patients, we want cell therapies that can be mass-produced, frozen and shipped to hospitals around the world,” said Lili Yang, a member of the Eli and Edythe Broad Center of Regenerative Medicine and Stem Cell Research at UCLA and the study’s senior author. “That way, doses of these therapies can be ready and waiting for patients as soon as they are needed.”

For the study, Yang and her colleagues focused on invariant natural killer T cells, or iNKT cells, which are unique not only for their power and efficacy but also because they don’t carry the risk of graft-versus-host disease, which occurs when transplanted cells attack a recipient’s body and which is the reason most cell-based immunotherapies must be created on a patient-specific basis, Yang said.

“Our findings suggest that one cord blood donation could produce up to 5,000 doses of the therapy and one peripheral blood donation could produce up to 300,000 doses,” said Yang, who is also an associate professor of microbiology, immunology and molecular genetics and a member of the UCLA Jonsson Comprehensive Cancer Center. ­­“At this yield, the cost of producing immune cell products could be dramatically reduced.”

The researchers first used genetic engineering to program the blood-forming stem cells to make them more likely to develop into iNKT cells. Next, these genetically engineered stem cells were placed into artificial thymic organoids, which mimic the environment of the thymus, a specialized organ in which T cells naturally mature in the body. After eight weeks in the organoids, each stem cell produced, on average, 100,000 iNKT cells.

Yang and her collaborators then tested the resulting cells, called hematopoietic stem cell-engineered iNKT cells, or HSC–iNKT cells, by comparing their cancer-fighting abilities with those of immune cells called natural killer cells, or NK cells. In a lab dish, the HSC–iNKT cells were significantly better at killing multiple types of human tumor cells — including leukemia, melanoma, lung cancer, prostate cancer and multiple myeloma cells — than the NK cells, the researchers found.

Even more importantly, the HSC–iNKT cells sustained their tumor-killing efficacy after being frozen and thawed, an essential requirement for widespread distribution of an off-the-shelf cell therapy.

The researchers next equipped the HSC–iNKT cells with a chimeric antigen receptor, or CAR, a specialized molecule used in some immunotherapies to enable immune cells to recognize and kill a specific type of cancer. In this case, they added to the HSC–iNKT cells a CAR that targets a protein found on multiple myeloma cells and then tested the cells’ ability to fight human multiple myeloma tumors that had been transplanted into mice.

These CAR-equipped HSC–iNKT cells eliminated the multiple myeloma tumors, and the mice that underwent this treatment remained tumor-free and showed no signs of complications such as graft-versus-host disease throughout their lives.

The researchers are now working to improve their manufacturing methods by moving to a feeder-free system that eliminates the need for supportive cells — such as those used in the thymic organoids — to assist blood stem cells in producing iNKT cells. Yang says she hopes this advance will better enable mass-production of the therapy and, ultimately, its clinical and commercial development.

The methods and products described in this study are covered by patent applications filed by the UCLA Technology Development Group on behalf of the Regents of the University of California, with Yang, Li, Yu Jeong Kim, Jiaji Yu, Pin Wang, Yanni Zhu, Crooks, Montel-Hagen and Seet listed as co-inventors. The treatment strategy was used in preclinical tests only; it has not been tested in humans or approved by the U.S. Food and Drug Administration as safe and effective for use in humans.

Funding for the study was provided by the National Institutes of Health, the California Institute for Regenerative Medicine, the Concern Foundation, the STOP CANCER Foundation, a UCLA Broad Stem Cell Research Center Rose Hills Foundation Innovator Grant and the Ablon Scholars Program.