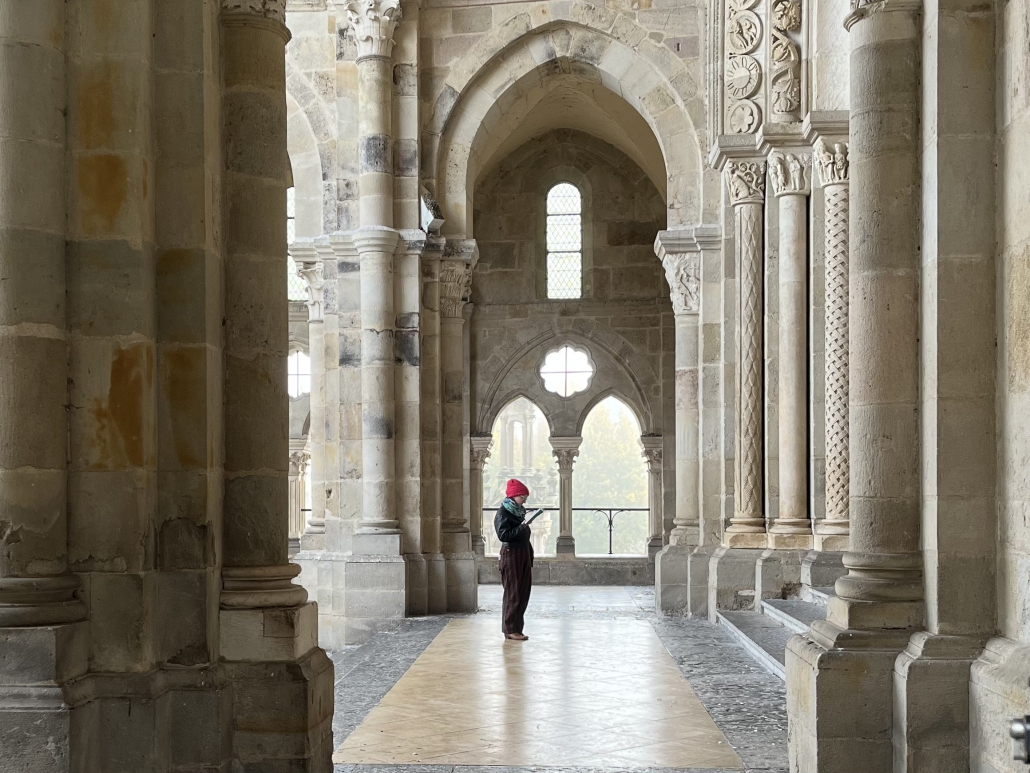 Founded early in the sixth century, rebuilt in the twelfth and dismantled in the nineteenth after the French Revolution, the glorious Abbey of Sainte-Geneviève in Paris was one of the earliest examples of Gothic architecture, but exists now only in legend.

In her dissertation, UCLA art history doctoral student Tori Schmitt hopes to shed more light on this medieval church, named after the patron saint of Paris and originally located where the neoclassical Panthèon now stands on the Left Bank.

“There’s not a building to work with, just sculptural fragments, drawings, watercolors and accounts by people. So that mystery intrigued me the more I read and learned about it,” says Tori Schmitt, a UCLA doctoral student in art history. “I’ve always loved 3-D modeling, drafting and trying to imagine what might have been, so I found it an exciting puzzle.”

Schmitt’s interest in historical reconstructions was first piqued when she served as an undergraduate research assistant to Professor Meredith Cohen on the digital humanities project Paris Past & Present. After earning her master’s at Columbia University, Schmitt returned to UCLA to once again work closely with her mentor, earning the inaugural Diane C. Brouillette Graduate Fellowship in Art History along the way.

“Diane C. Brouillette also worked on early Gothic architecture and sculpture; she wrote her dissertation on Senlis Cathedral,” says Schmitt. “I am honored to hold a fellowship in her name and add to the field.”

The fellowship will allow Schmitt to conduct research abroad in France, scouring Parisian archives and libraries in addition to viewing sculptural fragments of the abbey in the collections of Musée de Cluny, Musée Carnavalet and the Louvre. Crucially, she will be able to travel to other significant French sites of early Gothic architecture and sculpture, such as Chartres, Sens and Senlis, as well as museum collections throughout the country, and to gain a deeper understanding of the abbey’s enduring power across French culture and history.

This opportunity means everything to the Southern California native, who has long drawn inspiration from the architecture of Los Angeles and of UCLA’s campus. During the pandemic, Schmitt took up amateur photography, snapping images of interesting and surprising buildings she encountered on her bike rides, including quite a few L.A. Gothic-inspired, 1930s-era ‘storybook’ bungalows. For Schmitt, it’s a reminder that architecture doesn’t just belong to history or scholarship, but to everyone.

“Whenever I’m teaching undergrads, I try to remind them that they shouldn’t be intimidated by the study of architecture, because they’ve been interacting with it their entire lives,” she says. “They don’t have to become Gothic art historians like me, but I want them to be interested and engaged and to have open eyes for all the spaces they’ll enter throughout their lives. Ultimately, architecture is about people.”

Looking at history through this hands-on lens of wonder and curiosity is key to Schmitt’s approach in both her research and her teaching. After all, it’s one thing to ask a question of Google and receive thousands of results; it’s quite another to travel in person to a historical site and view a single document preserved for thousands of years. It helps bring the past—and most importantly its people—alive, and in a broader, more vivid context that connects us all. This is something Schmitt thinks about frequently, especially when she’s in the physical presence of the architectural creations that deserve to be thought of as much more than just buildings.

“When I went to Notre-Dame for the first time and climbed to the top, I was overwhelmed. It was so big, so beautiful it blew my mind,” Schmitt says. “They built it with no power tools—it was all relational math, highly complex geometry—and the skill on display is beyond belief. Gothic cathedrals were constructed to be awe-inspiring, and when you think about the people behind the place, that power is multiplied.”

‘I could be killed at any time’: The anguish of being wrongfully convicted...
Scroll to top