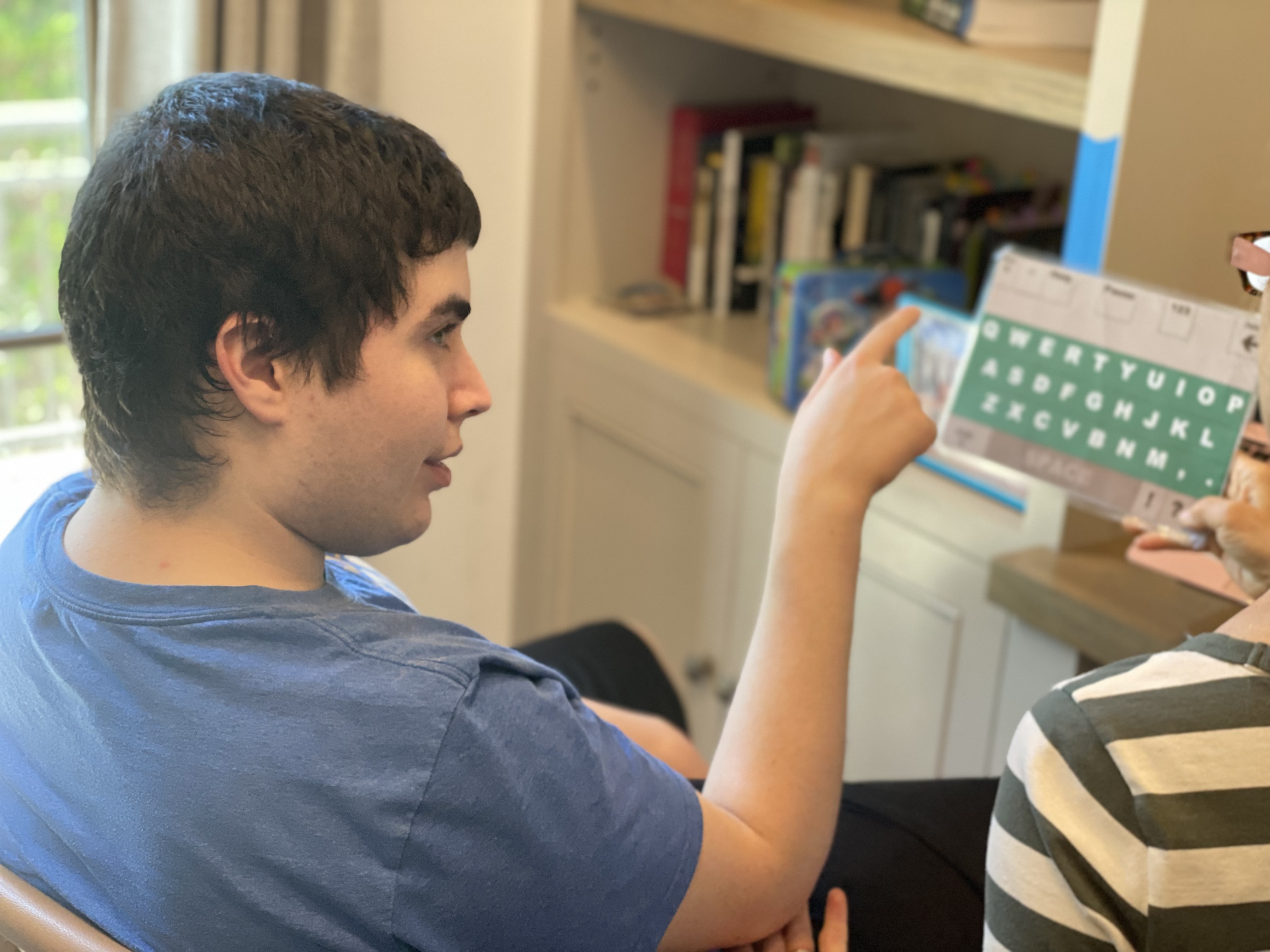 Aspiring novelist Woody Brown is going to have quite the author’s bio on a future dust jacket.

“I grew up a mighty weird autistic kid who was presumed to be retarded because I couldn’t speak,” he says. “My intelligence was not fully acknowledged until I went to Pasadena City College, where they accepted me and my upward trajectory began.”

Communicating using a letter board transcribed by his mother, Mary, his tireless champion and comic foil to his clever asides, Brown describes how his path to education, higher or otherwise, wasn’t always assured.

In fact, his mother had to wage a daily battle in and out of the classroom to get Brown the opportunity to earn an actual high school diploma, rather than a certificate of completion. Even after he proved himself and achieved this milestone, the question remained how he would fare at the college level.

“After Woody wrote his very first college paper, the professor asked to keep it to show future students,” Mary says. “Three years later Woody graduated with a 4.0 and honors, and got accepted to UCLA. Even now, when I think of where we came from—where people told me he’d never be able to learn—to where we are now, it’s indescribable.”

From his writerly beginnings as a child, making up stories about his heroic alter ego “Cop Woody,” Brown has always drawn creative inspiration from his journey and from the challenges he has and continues to overcome. In his first published work, a 2020 essay titled “Emerson and Me,” he explores the famed transcendentalist’s concept of self-reliance from the perspective of someone who seems anything but.

In this excerpt, Brown writes: “I am truly new in nature, and no one knows what I can do or where I can go, not even me. Who could have imagined, when I was a frustrated child refusing to cooperate with conformist therapists, or a frustrated adolescent throwing chairs at the ceiling of my conformist classroom, that I would become a college honors student? Emerson didn’t have someone like me in mind when he wrote about the merits of self-reliance, but I think I embody his ideal man perfectly.”

Today, Brown celebrates the “intellectual revelation” he’s experienced at UCLA as an English major, now in his senior year. Even though he hasn’t had the chance to spend time on campus due to the pandemic, being a Bruin has meant everything to him, especially after the English department honored him with the 2020-2021 Christopher Zyda Creative Writing Award.

“I was more speechless than usual—it felt like Christmas, my birthday and a miracle in one,” he says. “I had gotten good feedback on my writing from professors and classmates, but it never occurred to me that I could compete with neurotypical writers on anything near a level playing field.”

For his creative writing honors thesis, he’s working on a collection of short stories revolving around the myriad voices from an adult day care facility for people with autism. Brown recently completed final revisions on the collection’s gripping first story, “The Eloper,” narrated by a reluctant, observant client whose perspective occasionally mirrors his own.

In the story, Brown’s unnamed narrator shares, “As much as I wish I could just type my thoughts independently, that’s not how it works for most nonspeaking spellers. Our brains have trouble getting all the motor planning lined up to perform the complex actions involved in typed communication. Most people don’t even consider how many parts of the brain are activated when they speak or type. If your electronic impulses resist firing in the right order, like mine do […], the message gets lost somewhere between the thought and the finger hitting the keyboard.”

After graduating from UCLA, Brown hopes to pursue an MFA in creative writing at Columbia or NYU and to eventually support himself as a full-time author. Although he’s focusing his craft on short stories at the moment, he dreams one day of penning longer literary fiction from his unique perspective to spark empathy, inspiration and, ultimately, action.

“I am so happy that people are interested in my story,” Brown says. “Not only am I acting as a tour guide to my world for those who are unfamiliar with it, but I also have a larger mission. I want to act as a role model for others like me, to show that the door to success in the mainstream world is not locked against us.”

Will it be safe for humans to fly to Mars?
Scroll to top