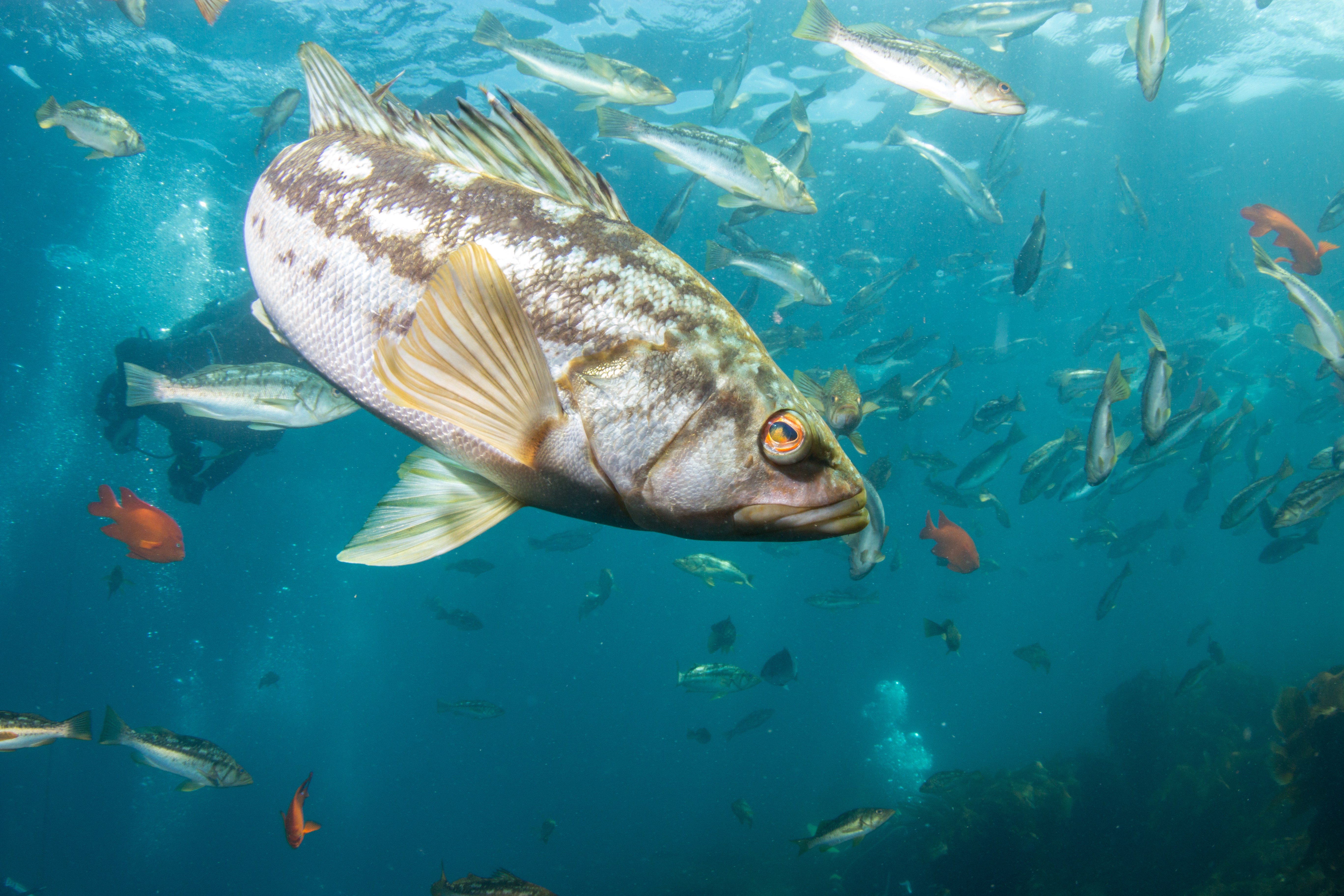 A school of kelp bass. A new database created by scientists from UCLA and other institutions covers about 70% of all animals that live in the California Current, off of the west coast of North America. Photo Credit: Zack Gold

The California Current extends nearly 2,000 miles from Canada’s Vancouver Island to the middle of the Baja Peninsula in Mexico. It brings cold water from the North Pacific Ocean to the west coast of North America and is home to numerous and abundant species because of the upwelling of deep nutrient-rich waters.

The current supports a large marine ecosystem that is home to species ranging from orcas to abalone. It is the basis for $56 billion in annual economic output and more than 675,000 jobs.

Now, UCLA ecologist Paul Barber and colleagues from UCLA and three other institutions have created a library of DNA “barcodes” that identify 605 species in the California Current, including 275 that had not previously been catalogued. The database covers about 70% of all animals that live there, including 99.9% of monitored species that are important to conservation and fisheries.

The barcodes aren’t actual black-and-white stripe patterns like the ones on food packaging in grocery stores. Rather, they are sequences of letters (A, T, C, and G) that spell out the unique order of amino acids (adenosine, thymine, cytosine and guanine) that identify each species’ DNA.

The research is published today in Molecular Ecology Resources.

The new database will enable researchers, conservationists, fisheries and wildlife managers to understand what is happening to species and ecosystems much more quickly and cost-effectively than current methods. It can be used to identify hotspots where certain species need to be better protected; and it might help authorities better police the fishing industry for catching species that are illegal to harvest.

The resource is based on the use of environmental DNA, or eDNA. Environmental DNA is genetic material that organisms shed into their environment. Using emerging and fast-improving methods, researchers can collect a sample of ocean water and find out what species are around by the DNA they leave behind. To do so, they need to be able to match that DNA to already-identified samples, said Barber, the study’s senior author.

“It’s like a crime scene where there is lots of forensic evidence, like blood or hair,” he said. “It isn’t useful unless you have a potential match in a database.”

To date, species have mostly been detected manually — scuba divers swim through the waters to count animals by hand; fish eggs and larvae are counted under a microscope — and researchers must identify species by their physical characteristics.

That labor-intensive process can limit research and delay action that might be needed to protect marine ecosystems and fisheries. With eDNA and a robust genetic library, researchers can identify species with scoops of water that can be analyzed in a couple of weeks, said Zack Gold, a former UCLA doctoral student who is now a researcher at the University of Washington and the National Oceanic and Atmospheric Administration. Plus, the technique keeps divers out of harm’s way.

The new genetic library could be a boon for managing fisheries. Samples of eDNA can be used to determine how many eggs are being produced by important species of fish so a healthy population can be maintained. Many fish eggs can’t be identified without genetics.

It also could even be used to make sure people are getting what they order when they go out to eat. Previous research by Barber and others found that 47% of sushi in Los Angeles restaurants is mislabeled, meaning that diners are occasionally eating endangered species instead of the fish they believed they were buying.

Although eDNA databases must be tailored to individual ecosystems and species, the new paper lays out best practices for future libraries around the world. Such libraries will become even more important to scientists as eDNA research becomes more sophisticated. Currently, one limitation of the practice is that while scientists can use the samples to determine which species are present, it’s not clear whether they can use it to determine how many individuals of each species are present — a measure called “abundance” — in any given area.

That may soon change.

“We have pretty good evidence that we’ll soon be able to use eDNA to measure abundance, accounting for the little differences for each species,” Gold said.

Barber said measuring abundance would be especially useful for fisheries.

“By developing this database, we now have an effectively complete set of genetic sequences for most of the commercially harvested species,” he said. “Without that, you can’t even ask questions of abundance.”