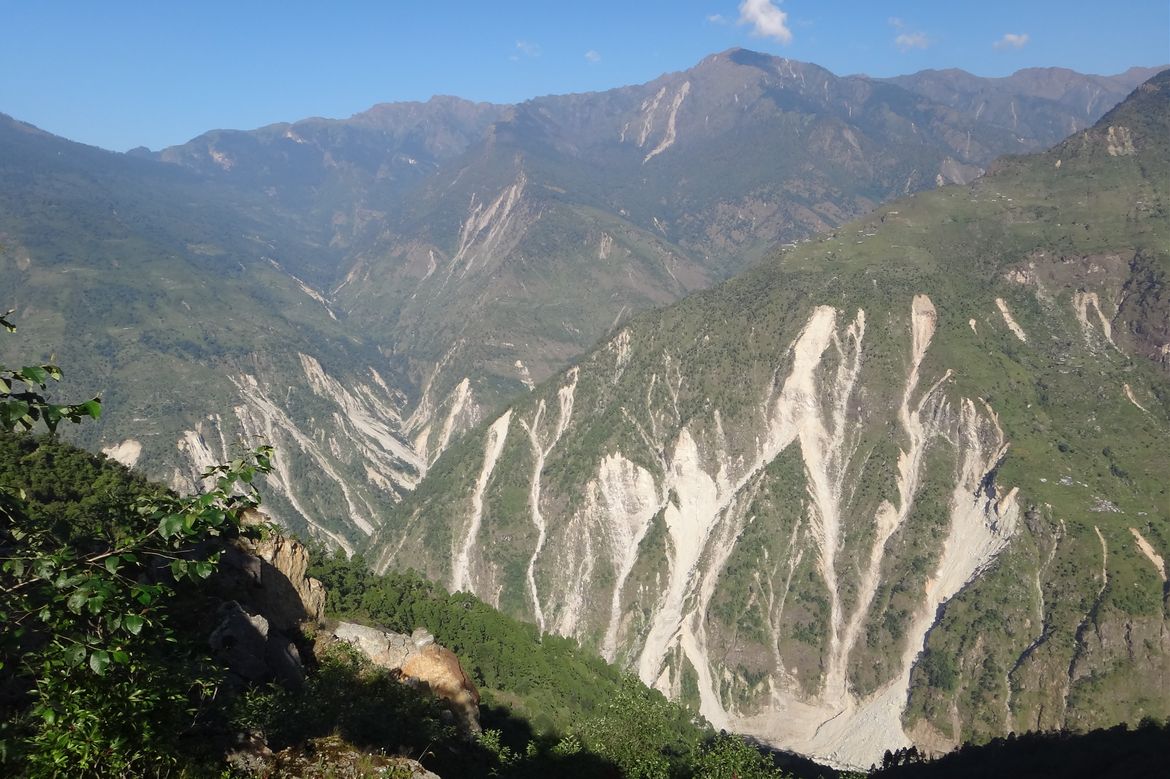 The Himalaya Mountains in Nepal after landslides caused by the 2015 Gorkha earthquake. (Photo Credit: Gen Li)

Each year, landslides kill thousands of people around the world and cause catastrophic property damage. But scientists are still trying to better understand the circumstances that cause them. Doing so would go a long way toward helping people predict where landslides could occur and how severe they might be.

A study led by Seulgi Moon, a UCLA professor of Earth, planetary and space sciences, could be a significant step toward that goal.

Moon and Gen Li, a former UCLA postdoctoral scholar who’s now at Caltech, created a new method to understand how topographic stress — which occurs when tectonic plates beneath the Earth’s surface slide toward each other enough to change the landscape above —influence landslide events. Their research is published in Nature Geoscience.

The study is the first to combine information about natural processes that take place both on the surface of the Earth and at the tectonic level; previous research focused only on landslides caused by events like earthquakes and rain.

“We found that the magnitude of big landslides is affected by not only local conditions such as slope and precipitation but can be also affected by forces deep underground,” Moon said. “This implies that the interaction between what’s above and below the ground is important to better understanding surface processes of the Earth.”

For the study, the scientists developed a new adaptation of an existing technology called 3D topographic stress modeling in order to identify places deep below the Earth’s surface where rocks are weathered — meaning that they’re weakened by natural geological processes — or fractured. By identifying those spots, the model can determine which locations are most susceptible to landslides.

“Understanding earth science and geology will be critical to making mitigation plans for landslides,” Moon said.

Moon and Li conducted the research on the Longmen Mountains, on the Eastern Tibetan Plateau. Their approach uses high-resolution satellite images to detect the sizes and locations of landslides. Those satellite images are compared to the fracturing and weathering of rocks in the same locations, which Moon said can be predicted from the topography of the Earth’s surface.

Areas in which the underground bedrock is particularly weak or fractured may be vulnerable to a large landslide.

Moon’s technique, which uses high-resolution underground stress distribution data, enabled the scientists to locate fracturing that would otherwise not have been apparent because it’s so deep beneath the Earth’s surface — as much as 500 meters (or about 1600 feet) down. The high-resolution underground stress distribution data allows the researchers to distinguish areas below the ground that are damaged due to high stress.

The new technique also could be used to determine where highly sensitive construction projects — like storage facilities for nuclear energy or water — should (or shouldn’t) take place.

This article, written by Angela Estrada, originally appeared in the UCLA Newsroom.