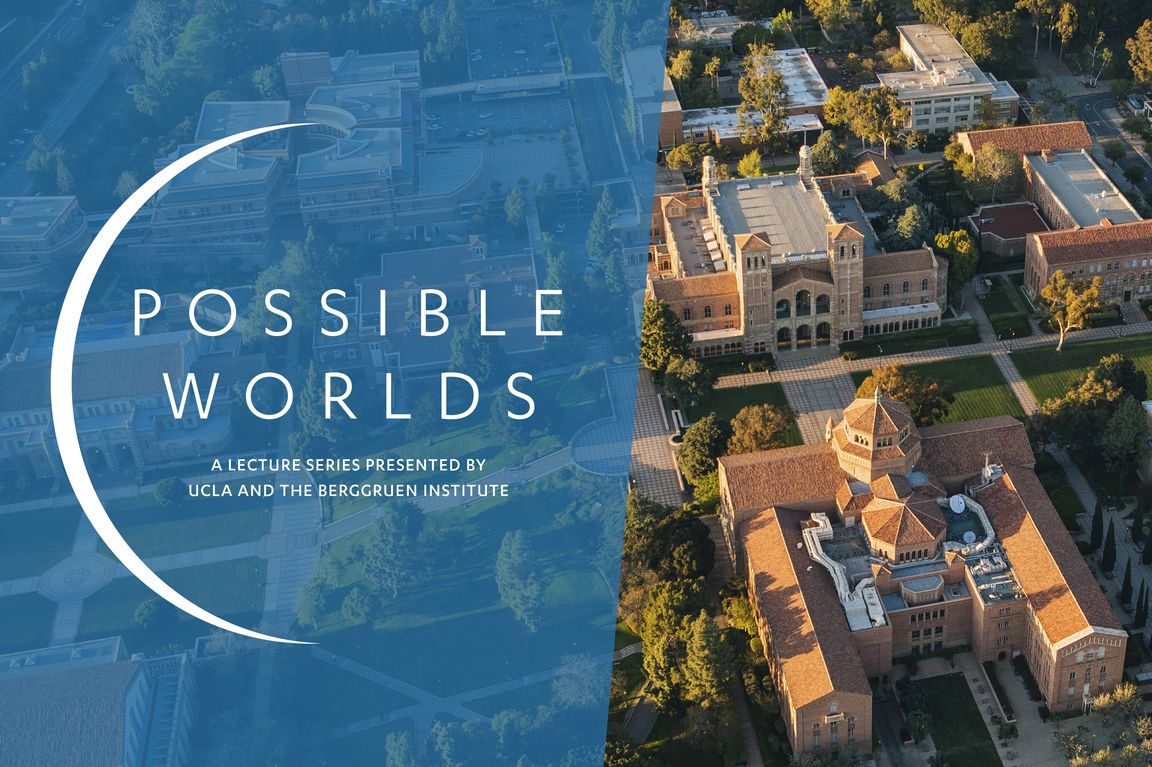 The UCLA Division of Humanities has partnered with the Los Angeles–based Berggruen Institute to launch “Possible Worlds,” a new lecture series that invites some of today’s most imaginative intellectual leaders and creators to deliver talks on the future of humanity.

The series will kick off Feb. 18, 2021, with a lecture by Harvard classicist and political theorist Danielle Allen, followed by presentations by architect Alejandro Aravena (spring 2021), author Kim Stanley Robinson (fall 2021), and innovation and sustainability expert Darja Isaksson (spring 2022). The cross-disciplinary lectures will highlight innovative ideas and offer unique insights about our transforming world.

The first collaborative project between UCLA and the Berggruen Institute, “Possible Worlds” furthers both institutions’ goal of fostering a culture of innovation in philosophy and governance, both in Southern California and throughout the world.

“Los Angeles is a place where innovation and diversity are celebrated and where far-reaching ideas are given a chance to take root,” said David Schaberg, dean of the UCLA Division of Humanities. “We’re proud to partner with the Berggruen Institute to amplify these qualities for the benefit of people everywhere with ‘Possible Worlds.’”

Having just celebrated its centennial anniversary, the UCLA Division of Humanities and its more than 200 faculty members are at the forefront of shaping workers and citizens who can uphold human values in a time of immense and rapid change. The Berggruen Institute, founded in 2010 by philanthropist Nicolas Berggruen, works to reinvent institutions to meet this century’s far-reaching and ongoing transformations of how we live, work, interact and govern.

“By partnering with UCLA Humanities, we can give a platform to true visionaries whose work has only just begun to shape the physical, intellectual and artistic landscape of society,” said Nils Gilman, the institute’s vice president of programs. “Attendees of ‘Possible Worlds’ will be guided in a multidisciplinary exploration of society and the human experience in the years to come.”

Allen, the James Bryant Conant University Professor at Harvard University and director of Harvard’s Edmond J. Safra Center for Ethics, is a political theorist whose work focuses on democratic theory, political sociology and the history of political thought. She is the recipient of a MacArthur Fellowship and the John W. Kluge Prize for Achievement in the Study of Humanity from the Library of Congress and is a member of the American Academy of Arts and Sciences and the American Philosophical Society. Her book “Our Declaration: A Reading of the Declaration of Independence in Defense of Equality” was awarded the Heartland Prize, the Zócalo Book Prize and the Society of American Historians’ Francis Parkman Prize.

Aravena is an architect and founder and executive director of the firm Elemental. His works include the “Siamese Towers” at the Catholic University of Chile and the Novartis office campus in Shanghai. In 2016, the New York Times named Aravena one of the world’s “creative geniuses” who had helped define culture. He and Elemental have received numerous honors, including the 2016 Pritzker Architecture Prize, the 2015 London Design Museum’s Design of the Year award and the 2011 Index Award. Aravena currently serves as the president of the Pritzker Prize jury.

Robinson is an American science fiction writer who has published more than 20 books, including the international bestselling “Mars” trilogy. His literary honors include the Hugo Award for Best Novel, the Nebula Award for Best Novel and the World Fantasy Award. Named a “Hero of the Environment” by Time magazine in 2008, Robinson has worked with the Sierra Nevada Research Institute, the National Science Foundation’s Antarctic Artists and Writers’ Program and UC San Diego’s Arthur C. Clarke Center for Human Imagination.

Isaksson is director general of Vinnova, Sweden’s national innovation agency, and serves as a member of the Swedish government’s National Digitalization Council and an adviser to the prime minister’s Innovation Council. The founder of two agencies, Isaksson has worked in business and product development for clients such as Sony Ericsson, Ikea and Husqvarna. She has been recognized as one of Sweden’s most powerful opinion-makers by financial magazine Veckans Affarer and was named one of the world’s 100 most influential people in digital government by the website Apolitical.

The AIDS pandemic of the 1980s and ’90s forms the backdrop for written works...