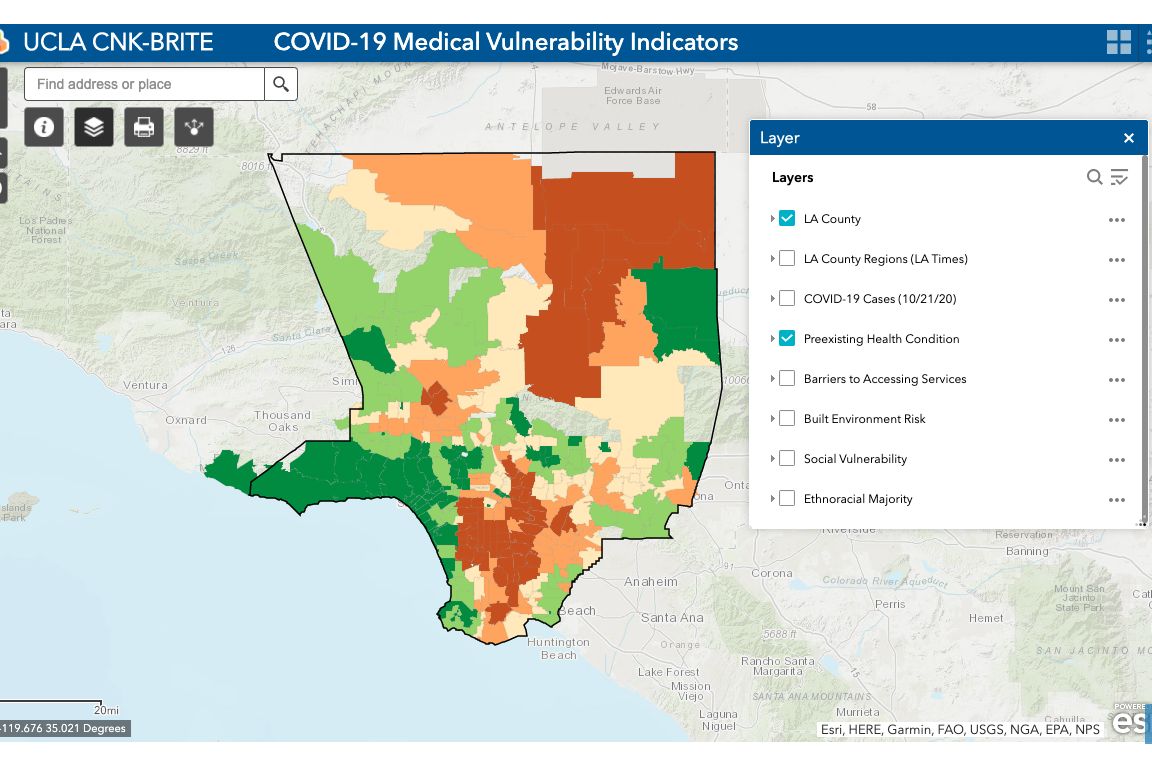 The predictive model can guide public health officials and leaders across the nation in harnessing local data that can help prevent infections and save lives, the UCLA researchers say. (Photo Credit: UCLA CNK-BRITE)

To help slow the spread of COVID-19 and save lives, UCLA public health and urban planning experts have developed a predictive model that pinpoints which populations in which neighborhoods of Los Angeles County are most at risk of becoming infected.

The researchers hope the new model, which can be applied to other counties and jurisdictions as well, will assist decision makers, public health officials and scientists in effectively and equitably implementing vaccine distribution, testing, closures and reopenings, and other virus-mitigation measures.

The research data demonstrate that neighborhoods characterized by significant clustering of racial and ethnic minorities, low-income households and unmet medical needs are most vulnerable to COVID-19 infection, specifically areas in and around South Los Angeles and the eastern portion of the San Fernando Valley. Communities along the coast and in the northwestern part of the county, which are disproportionately white and higher-income, were found to be the least vulnerable.

“The model we have includes specific resource vulnerabilities that can guide public health officials and local leaders across the nation to harness already available local data to determine which groups in which neighborhoods are most vulnerable and how to prevent new infections to save lives,” said research author Vickie Mays, a professor of psychology in the UCLA College and of health policy and management at the UCLA Fielding School of Public Health.

Mays, who also directs the National Institutes of Health–funded UCLA BRITE Center for Science, Research and Policy, worked with urban planner Paul Ong, director of the UCLA Center for Neighborhood Knowledge, to develop the indicators model, along with study co-authors Chhandara Pech and Nataly Rios Gutierrez. The maps were created by Abigail Fitzgibbon.

Utilizing data from the UCLA Center for Health Policy Research’s California Health Interview Survey, the U.S. Census Bureau’s American Community Survey and the California Department of Parks and Recreation, the researchers were able to determine how the four vulnerability indicators differentially predicted which racial and ethnic groups in Los Angeles County were the most vulnerable to infection based on their geographical residence.

Racial and ethnic groups with the highest vulnerability

Preexisting conditions. The authors found that 73% of Black residents live in neighborhoods with the highest rates of preexisting health conditions like diabetes, obesity and heart disease, as well as poor overall health and food insecurity. This was followed by 70% of Latinos and 60% of Cambodians, Hmongs and Laotians, or CHL. Conversely, 60% of white residents live in areas with low or the lowest vulnerability.

Barriers to accessing services. Forty percent of Latinos, 29% of Blacks, 22% of CHL and 16% of “other Asians” reside in neighborhoods with the greatest barriers to health care, characterized by high proportions of non–U.S. citizens, poor English-language ability, a lack of access to computer broadband service, lower rates of health insurance and poor access to vehicles for medical purposes. Only 7% of whites live in these neighborhoods.

Built-environment risk. Sixty-three percent of CHL, 55% of Latinos, 53% of Blacks and 32% of whites live areas considered to be at high or the highest vulnerability due to built-environment challenges, which include high population density, crowded housing and a lack of parks and open spaces.

Social vulnerability. According to the Centers for Disease Control, neighborhoods with high social vulnerability are characterized by lower socioeconomic status and education attainment, a higher prevalence of single-parent and multigenerational households, greater housing density, poorer English-language ability and a lack of access to vehicles, among other factors. While only 8% of whites live in these neighborhoods, 42% of both Blacks and Latinos do, as do 38% of CHL.

How the model can help with COVID-19–mitigation efforts

“When the pandemic hit, we were slowed down by a lack of science and a lack of understanding of the ways in which health disparities in the lives of some of our most vulnerable populations made their risk of COVID-19 infection even greater,” Mays said. “We thought elderly and people in nursing homes were the most vulnerable, yet we found that lacking a number of social resources contributes to a greater likelihood of getting infected as well.”

► Read an interview with Mays on the how COVID-19 is affecting Black Americans and how better data can help prevent its spread.

And while nationwide statistics have shown that the virus has had a disproportionate effect on low-income communities and communities of color, knowing precisely which populations are the most vulnerable and where new infections are likely to occur is critical information in determining how to allocate scarce resources and when to open or close areas, Mays and Ong said.

If, for example, English-language ability is a barrier to accessing health information and services in a vulnerable neighborhood, health officials should develop campaigns in Spanish or another appropriate language highlighting the availability of testing, the researchers stress. If access to a car is a barrier for families in an at-risk area, walk-up testing sites should be made available. When crowded housing in a high-risk neighborhood is the predominant housing stock, testing resources should be set up for entire households and hotel vouchers made available to help with quarantining after a positive test.

The data can also provide critical knowledge and insights to social service providers, emergency agencies and volunteers on where to direct their time and resources, such as where to set up distribution sites for food and other necessities. And importantly, identifying the areas and populations with the highest vulnerability will help decision-makers equitably prioritize vaccine-distribution plans to include the most vulnerable early.

In the longer term, the researchers say, the model will also provide valuable information to urban planners so that they can target specific areas for the development of less-dense housing and more parks and open spaces, creating healthier neighborhoods that can better withstand future pandemics while promoting equity in long-term health outcomes.

This article, written by Elizabeth Kivowitz Boatright-Simon, originally appeared in the UCLA Newsroom.