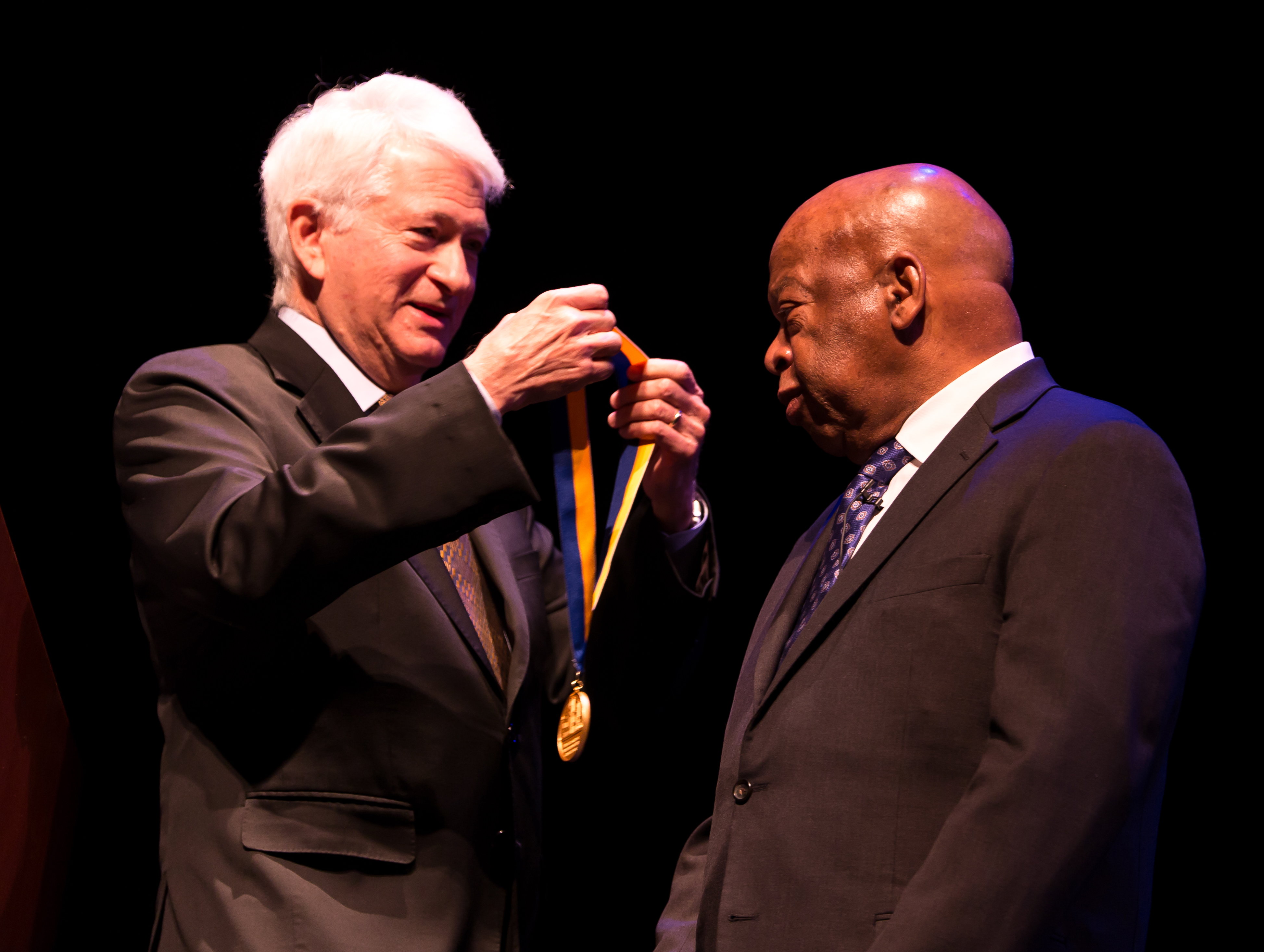 Patricia Turner is professor of African American studies in the UCLA College and professor of world arts and culture/dance in the School of the Arts and Architecture.

As I was driving from UCLA to my home in the Valley, on April 10, 2017, I was warmed by the knowledge that my meeting with Congressman John Lewis constituted a personal milestone that I would always treasure. With the news in December 2019 of his pancreatic cancer diagnosis, I was moved again by the quiet power of the man I had studied and taught about and the man I got to watch in action that day two years prior. Now, with the news of Lewis’ death, I have lost a personal hero.

As a faculty member, I discourage my students from over-indulging in hero worship. All too often the men and women whom we read about don’t match the ones we meet. They are —like us — flawed, human and self-serving.

But I couldn’t take my own advice with Congressman Lewis. I had taught about him numerous times in my African American Studies courses, drawing the students’ attention to his unswerving commitment to nonviolence, even when others in the then nascent Black Power movement were trying to marginalize him for his convictions. The 1965 image of him in his tan raincoat and with his backpack on being savagely beaten while marching across the Edmund Pettus Bridge is seared in my mind.

Several decades later, I heard Lewis speak at a Smithsonian event on the mall featuring samples of the AIDS quilt, and I, like almost everyone else under the tent, was moved to tears to hear him talk about the honor he felt that his home district in Georgia had been selected as the one to care and preserve such an important expression of art and social justice. And now, no trip to D.C. is complete for me without a stop by the National Museum of African American History and Culture, an extraordinarily significant cultural resource that he shepherded through all of the requisite partisan and bureaucratic challenges that come with erecting a new museum in Washington.

When the call went out at UCLA to nominate deserving individuals for our highest honor, the UCLA Medal, I nominated Lewis and pitched bestowing the medal on him at our annual Winston C. Doby Distinguished Lecture, an annual event conceived by UCLA’s Academic Advancement Program in honor of a leader who dedicated his career to increasing student diversity and access at UCLA and throughout the University of California system. Within the acreage of UCLA, Doby was a John Lewis.

One of the first senior African American administrators on the campus, Doby fought tirelessly on behalf of all of students but he had a determined goal of increasing the number of Black admitted students and graduates. When Proposition 209 threatened to curtail the number of Black admits, Doby assembled an impressive and generous cohort of alumni and raised significant funds from them to underwrite scholarships for Black students — a practice that required a significant work around to be both legal and compliant with the new legislation. Hundreds of Black students have UCLA on their transcripts because of Doby’s efforts.

Lewis accepted our invitation and I knew as the senior dean of the UCLA College and the person who nominated him, I would get some face time with him. Inspired by his comments in his moving autobiography, “Walking With the Wind: A Memoir of the Movement,” I thought I would give him copies of my books and tell him that the work he and his generation had accomplished enabled me to achieve so much in a realm that was forbidden to us before the civil rights movement. He had noted in his autobiography, that his collection of books by Black authors was one of his most prized possessions. But then I realized that my story was the story of so many of my Black colleagues at UCLA. So I put out a call asking everyone to donate books for a gift.

We constructed a suitably academic backdrop for the question-and-answer period on the stage of Royce Hall — oversized leather chairs framed by bookshelves. At the end of a candid Q&A, Professor Tyrone Howard, who now holds the Pritzker Family Endowed Chair in Strengthening Families, told Lewis that the books weren’t props, they were all written by faculty of color at UCLA who agreed that his work on the front lines enabled our own in our laboratories and libraries and that we were sending them to Georgia for his library. He was quite moved.

I did get my face time with him and had no problem getting him to sign my copy of “Wind.” He asked about my teaching, and when I mentioned how much my students enjoyed reading about Jo Ann Gibson Robinson, a relatively unknown but vastly important figure in the Montgomery Bus Boycott, his face lit up. I had been temporarily uneasy about telling a civil rights icon how much my students liked someone else from the movement but he turned out to be an ardent and hardcore Robinson fan and showered me with praise for making sure my students knew about her.

At the luncheon, he was seated at the table with his long-time mentor and lecturer at UCLA, the Rev. James Lawson, Chancellor Gene Block, Jeanne Moutoussamy-Ashe, Meyer and Renee Luskin, myself and others. The Doby family was spread out at other tables but when I called them up to present him with the plaque that comes with the lecture, he professed admiration for all he had learned about Winston Doby. He offered to host them at the museum should they come to D.C. Meyer and Renee Luskin were so moved that they created a scholarship that now underwrites the cost of books for a UCLA student admitted from his congressional district.

In pre-event planning, we had fretted about security. In prior months, Lewis had been in an inelegant exchange with then President-elect Donald Trump. We didn’t get a lot of guidance from his staff. We opted for the regular “important speaker” contingent in the hall itself and arranged for one plain-clothes security officer to be around in the green room, backstage and at the luncheon. After all of the luncheon guests had departed, the man working security came up to him and said, “Congressman Lewis, can I have a picture with you?” Lewis thanked him for his service, handed me the officer’s cell phone and smiled with the profound sincerity, respect and dignity we had seen all day.

The world has truly lost a bright light, who provided an example by action, with dignity and grace.

UCLA sociologist approaches modern Iran from ‘best of both worlds’

Voters in both parties favor caution as cities begin to reopen