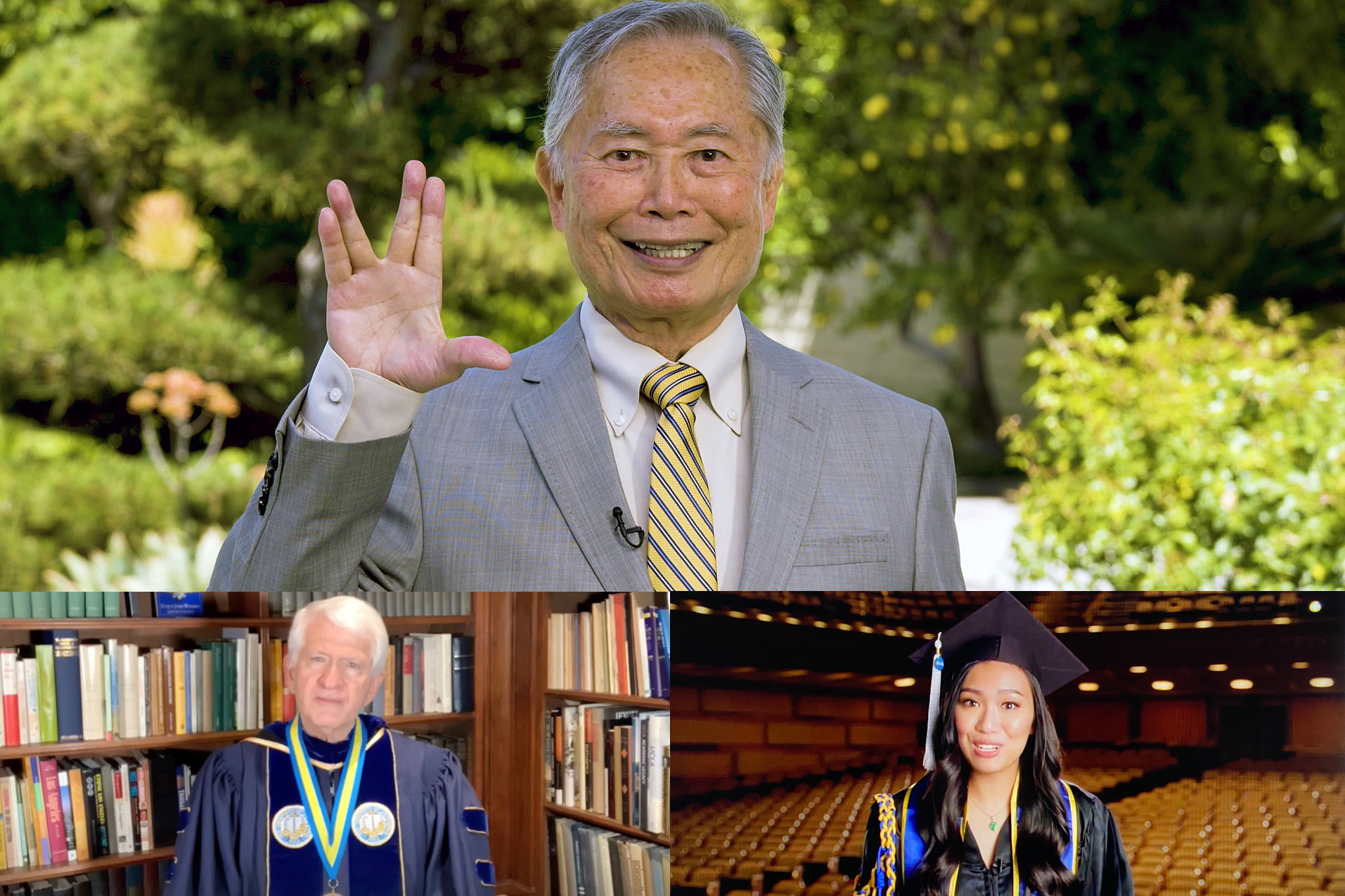 UCLA’s class of 2020 celebrated their graduation today while scattered across the globe. For the first time, the university’s largest graduation celebration took place remotely, honoring the roughly 8,800 students of the UCLA College.

“Today we gather virtually to celebrate the conferral of your degrees in a uniquely 21st century high-tech way – but, rest assured, your hard-earned degrees will be real. You guys are so futuristic!” the graduates were told by actor, activist, alumnus and social media icon George Takei. The man who helped others imagine a brighter future through his role on “Star Trek” called on graduates to build a better world. “With the experience of the pandemic, challenge yourselves to imagine the unimagined. You have technology that dazzles the mind. Soar with it. Aspire as no others have.”

Though the pandemic caused by the novel coronavirus means most students haven’t set foot at UCLA since March 13, classes continued remotely. While in-person ceremonies are planned once group gatherings are safe again, graduating students more than earned a celebration on what would have been their commencement day. Among the Centennial class, graduating at the close of UCLA’s first 100 years, nearly a third are first-generation college students, and more than 35 percent come from low-income households.

The ceremony opened with a moment of silence to recognize and honor victims of COVID-19 and also racial oppression. This was followed by a pledge by the six College deans to continue to fight social injustice.

Speakers borrowed from an array of real and fictional inspirational figures, quoting the words of activist author James Baldwin, historian Rebecca Solnit, wizard Albus Dumbledore, and Vulcan Starfleet officer Mr. Spock. The virtual celebration featured views of familiar buildings, fountains and hilltop vistas to soothe homesick Bruins, and senior Margaret Miller sang the “Star-Spangled Banner.” Students viewed the livestream or the later recording from couches with their parents, in apartments with roommates, or on laptops in empty rooms. Some added homemade pomp and circumstance by crafting their own mortarboards or using free graduation profile frames and yard signs from the Alumni Association they would soon join. 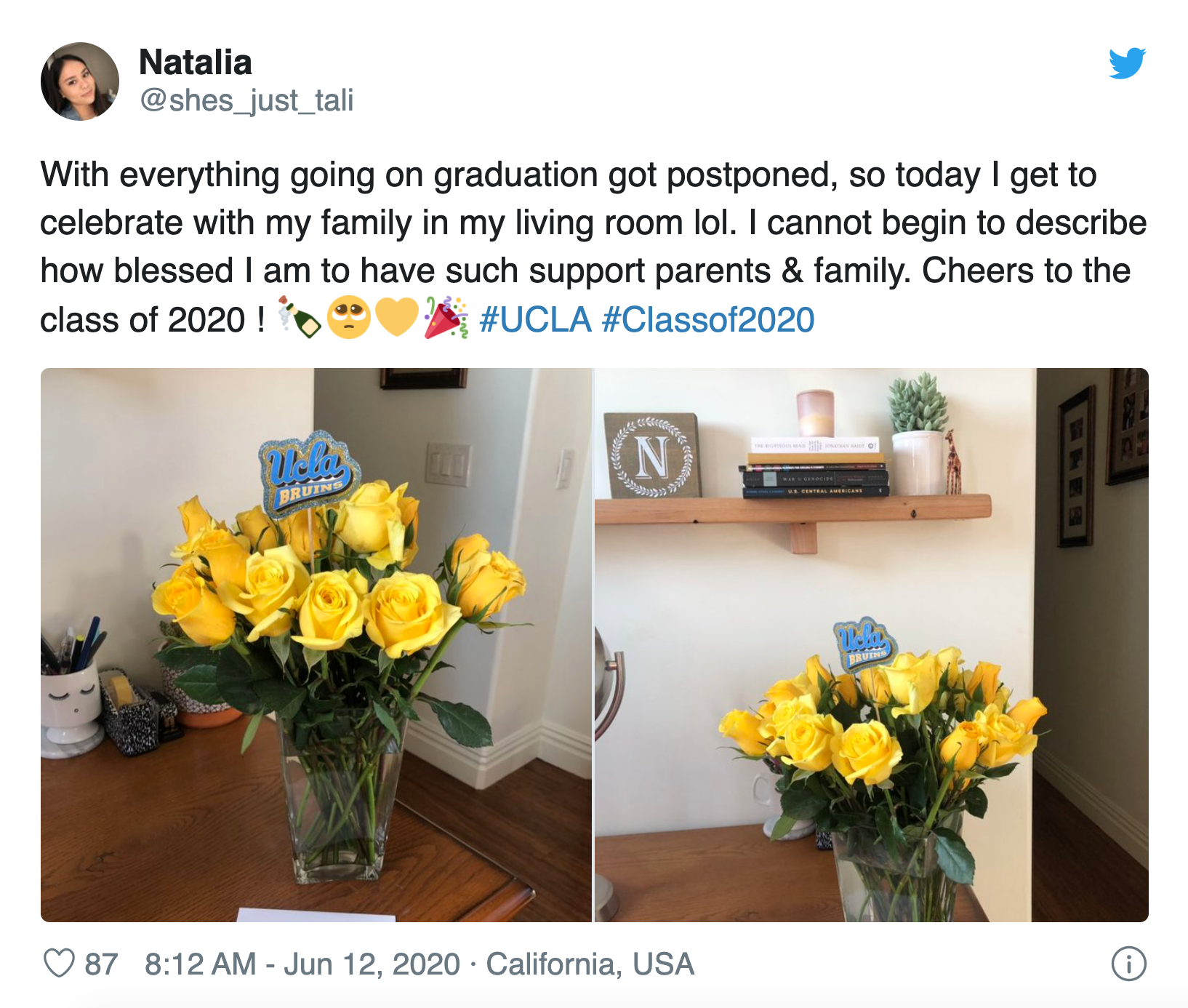 UCLA Chancellor Gene Block praised the graduates’ resilience at completing their studies and acknowledged those who also found ways to get involved, whether by treating COVID-19 patients, making face masks to slow the spread of the virus, or joining the nationwide wave of protests against the murder of Black men and women by police.

“A global pandemic has upended our lives and prevented us from being together,” Block said. “We’re all reeling, once again, from the pain of racial injustice … The horrible killings of unarmed African Americans have reminded us of our society’s inequities, but strengthened our resolve to address them.”

History shows that catastrophic events can expose “the failings of the status quo” and lead to reforms, Block added, referencing Solnit before calling on the graduates to build a more resilient, compassionate and just society. Though in almost any year, graduates are asked to make the world a better place, current events added extra resonance to that plea.

“The imagination to envision better times, especially in hard times, is vital,” Block said. “James Baldwin wrote that ‘not everything that is faced can be changed, but nothing can be changed until it is faced.’ … Now is your time to envision the role you’ll play in changing our world and creating a new one.”

Filmed in an empty Royce Hall, student speaker Kristie-Valerie Phung Hoang grieved the loss of the students’ final months on campus, but reminded her fellow graduates that they have already begun to improve the world.

“It is at UCLA where we’ve felt compassion for each other, and drove our support toward undocumented students, first-generation students and immigrants working to make a better life of their own,” she said. “We poured our minds towards driving research in hopes of finding life-saving cures … We created paths towards a greener, healthier planet … We lived and breathed the spirit of equality.”

Though the campus’ graduation season shrank from the usual 60 or so ceremonies and celebrations to a little more than 30 virtual events because of the pandemic, UCLA awarded degrees to nearly 14,000 students from its undergraduate and graduate programs. Other speakers include guitarist Carlos Santana for the Herb Alpert School of Music, former U.S. Attorney General Eric Holder for the UCLA School of Law, and California’s first surgeon general, Dr. Nadine Burke Harris for the David Geffen School of Medicine.

In introducing Takei, Block praised his activism in speaking up for Muslims, immigrants, and the LGBTQ community, and tied Takei’s activism to his days as an actor playing Mr. Sulu beginning in 1966.

“George made history on a multi-ethnic new TV show called ‘Star Trek,’” Block said. “The show premiered at the same time that the Vietnam War was fueling decades of anti-Asian bigotry. As a Japanese-American child during World War II, George had endured that bigotry first hand in America’s shameful internment camps. George’s presence as one of the heroes of the show was a rebuke to the prejudice of the time. Star Trek imagined a future in which all of Earth’s races lived together in peace.”

Sixty years after his own graduation from UCLA, Takei observed the highs and lows of the pandemic, from tireless medical and frontline workers, to unemployment and economic havoc.

“We live in a time of heroes and menaces,” Takei said. “And where we expect leadership, we find shocking dysfunction. It is a virtual dystopian state.”

But amidst this “dark moment,” he added, the air has cleared from the decreased use of fossil fuels for vehicles and factories, giving the world a glimpse of a cleaner planet. He urged the graduates to learn from it and find ways to improve the human condition.

“We look to you, the high-tech generation, to seize this moment,” Takei said. “Revitalize our civilization. Discover new challenges. Stretch as far as you can. Boldly go where no one has gone before. May the UCLA Centennial 2020 class live long and prosper.”

The virtual celebration closed with a bittersweet view of the Inverted Fountain, where graduating seniors traditionally take a dip to celebrate their years of hard work.

“Our 2020 graduates will be the class that persevered,” said Patricia Turner, vice provost and dean of undergraduate dducation. “Let this moment of adversity forge in you a strength to overcome, to persevere, to know that the world is inherently beautiful, and that your future has only just begun.”