You are here: Home / Featured Stories / Box 5 / Astronomers discover class of strange objects near our galaxy’s enormous b... 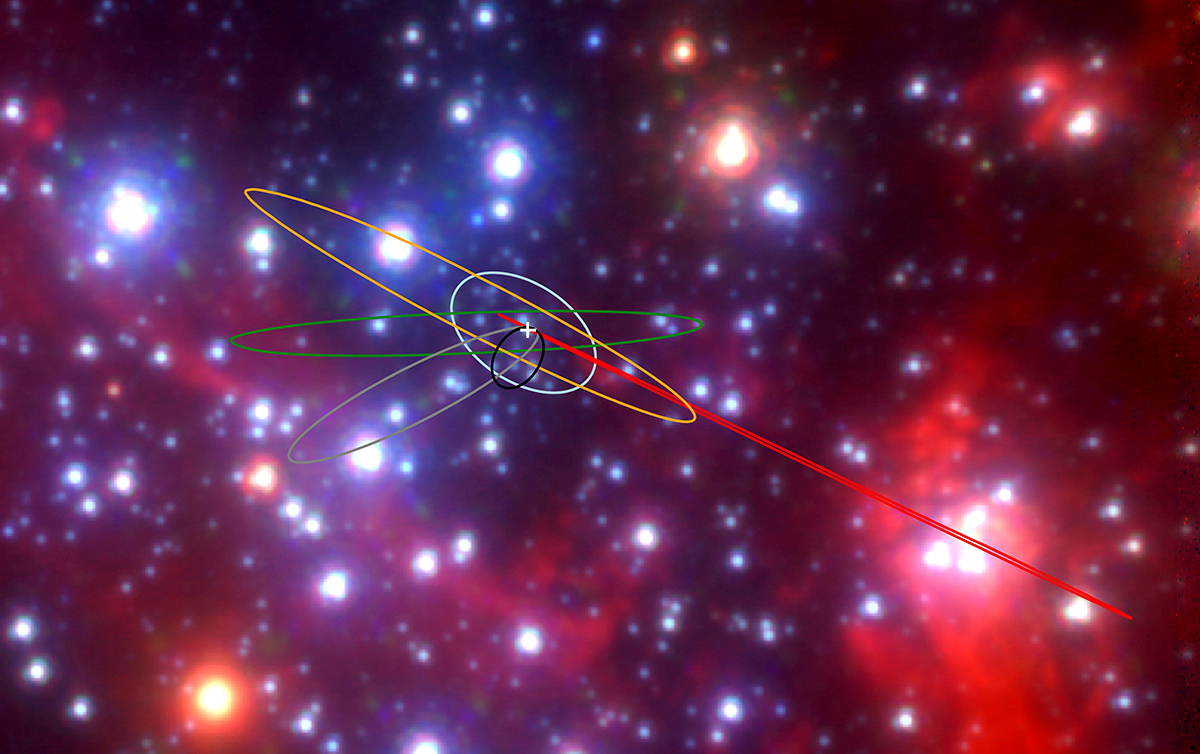 Orbits of the G objects at the center of our galaxy, with the supermassive black hole indicated with a white cross. Stars, gas and dust are in the background. Photo: Anna Ciurlo, Tuan Do/UCLA Galactic Center Group

Astronomers from UCLA’s Galactic Center Orbits Initiative have discovered a new class of bizarre objects at the center of our galaxy, not far from the supermassive black hole called Sagittarius A*. They published their research in the Jan. 16 issue of the journal Nature.

“These objects look like gas and behave like stars,” said co-author Andrea Ghez, UCLA’s Lauren B. Leichtman and Arthur E. Levine Professor of Astrophysics and director of the UCLA Galactic Center Group.

The new objects look compact most of the time and stretch out when their orbits bring them closest to the black hole. Their orbits range from about 100 to 1,000 years, said lead author Anna Ciurlo, a UCLA postdoctoral researcher.

Ghez’s research group identified an unusual object at the center of our galaxy in 2005, which was later named G1. In 2012, astronomers in Germany made a puzzling discovery of a bizarre object named G2 in the center of the Milky Way that made a close approach to the supermassive black hole in 2014. Ghez and her research team believe that G2 is most likely two stars that had been orbiting the black hole in tandem and merged into an extremely large star, cloaked in unusually thick gas and dust.

“At the time of closest approach, G2 had a really strange signature,” Ghez said. “We had seen it before, but it didn’t look too peculiar until it got close to the black hole and became elongated, and much of its gas was torn apart. It went from being a pretty innocuous object when it was far from the black hole to one that was really stretched out and distorted at its closest approach and lost its outer shell, and now it’s getting more compact again.”

“One of the things that has gotten everyone excited about the G objects is that the stuff that gets pulled off of them by tidal forces as they sweep by the central black hole must inevitably fall into the black hole,” said co-author Mark Morris, UCLA professor of physics and astronomy. “When that happens, it might be able to produce an impressive fireworks show since the material eaten by the black hole will heat up and emit copious radiation before it disappears across the event horizon.”

But are G2 and G1 outliers, or are they part of a larger class of objects? In answer to that question, Ghez’s research group reports the existence of four more objects they are calling G3, G4, G5 and G6. The researchers have determined each of their orbits. While G1 and G2 have similar orbits, the four new objects have very different orbits.

Ghez believes all six objects were binary stars — a system of two stars orbiting each other — that merged because of the strong gravitational force of the supermassive black hole. The merging of two stars takes more than 1 million years to complete, Ghez said.

“Mergers of stars may be happening in the universe more often than we thought, and likely are quite common,” Ghez said. “Black holes may be driving binary stars to merge. It’s possible that many of the stars we’ve been watching and not understanding may be the end product of mergers that are calm now. We are learning how galaxies and black holes evolve. The way binary stars interact with each other and with the black hole is very different from how single stars interact with other single stars and with the black hole.”

Ciurlo noted that while the gas from G2’s outer shell got stretched dramatically, its dust inside the gas did not get stretched much. “Something must have kept it compact and enabled it to survive its encounter with the black hole,” Ciurlo said. “This is evidence for a stellar object inside G2.”

“The unique dataset that Professor Ghez’s group has gathered during more than 20 years is what allowed us to make this discovery,” Ciurlo said. “We now have a population of ‘G’ objects, so it is not a matter of explaining a ‘one-time event’ like G2.”

The researchers made observations from the W.M. Keck Observatory in Hawaii and used a powerful technology that Ghez helped pioneer, called adaptive optics, which corrects the distorting effects of the Earth’s atmosphere in real time. They conducted a new analysis of 13 years of their UCLA Galactic Center Orbits Initiative data.

In September 2019, Ghez’s team reported that the black hole is getting hungrier and it is unclear why. The stretching of G2 in 2014 appeared to pull off gas that may recently have been swallowed by the black hole, said co-author Tuan Do, a UCLA research scientist and deputy director of the Galactic Center Group. The mergers of stars could feed the black hole.

The team has already identified a few other candidates that may be part of this new class of objects, and are continuing to analyze them.

Ghez noted the center of the Milky Way galaxy is an extreme environment, unlike our less hectic corner of the universe.

Ghez said this research will help to teach us what is happening in the majority of galaxies.

Other co-authors include Randall Campbell, an astronomer with the W.M. Keck Observatory in Hawaii; Aurelien Hees, a former UCLA postdoctoral scholar, now a researcher at the Paris Observatory in France; and Smadar Naoz, a UCLA assistant professor of physics and astronomy.

The research is funded by the National Science Foundation, W.M. Keck Foundation and Keck Visiting Scholars Program, the Gordon and Betty Moore Foundation, the Heising-Simons Foundation, Lauren Leichtman and Arthur Levine, Jim and Lori Keir, and Howard and Astrid Preston.

In July 2019, Ghez’s research team reported on the most comprehensive test of Einstein’s iconic general theory of relativity near the black hole. They concluded that Einstein’s theory passed the test and is correct, at least for now.

►View an animation below of the orbits of the G objects, together with the orbits of stars near the supermassive black hole. Credit: Advanced Visualization Lab, National Center for Supercomputing Applications, University of Illinois