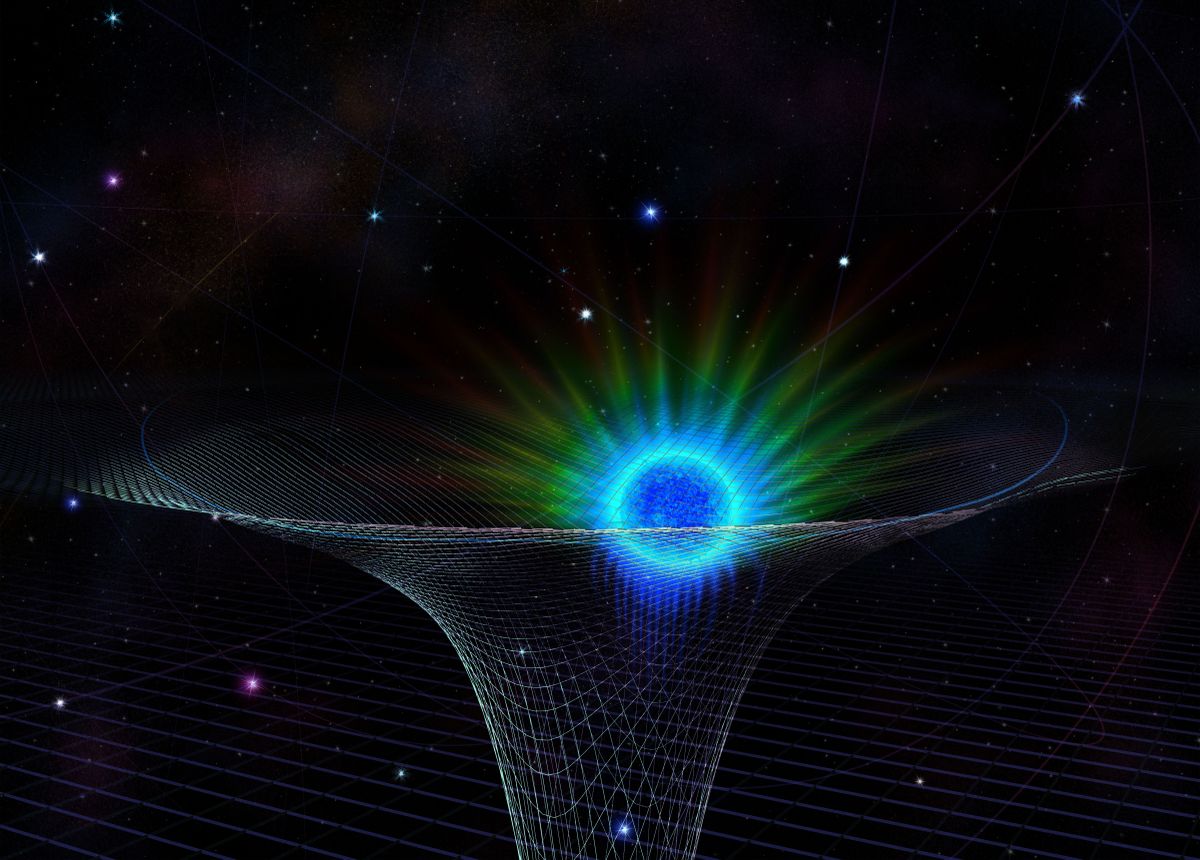 A star known as S0-2 (the blue and green object in this artist’s rendering) made its closest approach to the supermassive black hole at the center of the Milky Way in 2018. Artist’s rendering by Nicolle Fuller/National Science Foundation.

“Einstein’s right, at least for now,” said Ghez, a co-lead author of the research. “We can absolutely rule out Newton’s law of gravity. Our observations are consistent with Einstein’s theory of general relativity. However, his theory is definitely showing vulnerability. It cannot fully explain gravity inside a black hole, and at some point we will need to move beyond Einstein’s theory to a more comprehensive theory of gravity that explains what a black hole is.”

Einstein’s 1915 theory of general relativity holds that what we perceive as the force of gravity arises from the curvature of space and time. The scientist proposed that objects such as the sun and the Earth change this geometry. Einstein’s theory is the best description of how gravity works, said Ghez, whose UCLA-led team of astronomers has made direct measurements of the phenomenon near a supermassive black hole — research Ghez describes as “extreme astrophysics.”

The laws of physics, including gravity, should be valid everywhere in the universe, said Ghez, who added that her research team is one of only two groups in the world to watch a star known as S0-2 make a complete orbit in three dimensions around the supermassive black hole at the center of the Milky Way. The full orbit takes 16 years, and the black hole’s mass is about 4 million times that of the sun.

The researchers say their work is the most detailed study ever conducted into the supermassive black hole and Einstein’s theory of general relativity.

The key data in the research were spectra that Ghez’s team analyzed last April, May and September as her “favorite star” made its closest approach to the enormous black hole. Spectra, which Ghez described as the “rainbow of light” from stars, show the intensity of light and offer important information about the star from which the light travels. Spectra also show the composition of the star. These data were combined with measurements Ghez and her team have made over the last 24 years.

Spectra — collected at the W.M. Keck Observatory in Hawaii using a spectrograph built at UCLA by a team led by colleague James Larkin — provide the third dimension, revealing the star’s motion at a level of precision not previously attained. (Images of the star the researchers took at the Keck Observatory provide the two other dimensions.) Larkin’s instrument takes light from a star and disperses it, similar to the way raindrops disperse light from the sun to create a rainbow, Ghez said.

“What’s so special about S0-2 is we have its complete orbit in three dimensions,” said Ghez, who holds the Lauren B. Leichtman and Arthur E. Levine Chair in Astrophysics. “That’s what gives us the entry ticket into the tests of general relativity. We asked how gravity behaves near a supermassive black hole and whether Einstein’s theory is telling us the full story. Seeing stars go through their complete orbit provides the first opportunity to test fundamental physics using the motions of these stars.”

Ghez’s research team was able to see the co-mingling of space and time near the supermassive black hole. “In Newton’s version of gravity, space and time are separate, and do not co-mingle; under Einstein, they get completely co-mingled near a black hole,” she said.

“Making a measurement of such fundamental importance has required years of patient observing, enabled by state-of-the-art technology,” said Richard Green, director of the National Science Foundation’s division of astronomical sciences. For more than two decades, the division has supported Ghez, along with several of the technical elements critical to the research team’s discovery. “Through their rigorous efforts, Ghez and her collaborators have produced a high-significance validation of Einstein’s idea about strong gravity.”

Keck Observatory Director Hilton Lewis called Ghez “one of our most passionate and tenacious Keck users.” “Her latest groundbreaking research,” he said, “is the culmination of unwavering commitment over the past two decades to unlock the mysteries of the supermassive black hole at the center of our Milky Way galaxy.”

The researchers studied photons — particles of light — as they traveled from S0-2 to Earth. S0-2 moves around the black hole at blistering speeds of more than 16 million miles per hour at its closest approach. Einstein had reported that in this region close to the black hole, photons have to do extra work. Their wavelength as they leave the star depends not only on how fast the star is moving, but also on how much energy the photons expend to escape the black hole’s powerful gravitational field. Near a black hole, gravity is much stronger than on Earth.

Ghez was given the opportunity to present partial data last summer, but chose not to so that her team could thoroughly analyze the data first. “We’re learning how gravity works. It’s one of four fundamental forces and the one we have tested the least,” she said. “There are many regions where we just haven’t asked, how does gravity work here? It’s easy to be overconfident and there are many ways to misinterpret the data, many ways that small errors can accumulate into significant mistakes, which is why we did not rush our analysis.”

Ghez, a 2008 recipient of the MacArthur “Genius” Fellowship, studies more than 3,000 stars that orbit the supermassive black hole. Hundreds of them are young, she said, in a region where astronomers did not expect to see them.

It takes 26,000 years for the photons from S0-2 to reach Earth. “We’re so excited, and have been preparing for years to make these measurements,” said Ghez, who directs the UCLA Galactic Center Group. “For us, it’s visceral, it’s now — but it actually happened 26,000 years ago!”

This is the first of many tests of general relativity Ghez’s research team will conduct on stars near the supermassive black hole. Among the stars that most interest her is S0-102, which has the shortest orbit, taking 11 1/2 years to complete a full orbit around the black hole. Most of the stars Ghez studies have orbits of much longer than a human lifespan.

Ghez’s team took measurements about every four nights during crucial periods in 2018 using the Keck Observatory — which sits atop Hawaii’s dormant Mauna Kea volcano and houses one of the world’s largest and premier optical and infrared telescopes. Measurements are also taken with an optical-infrared telescope at Gemini Observatory and Subaru Telescope, also in Hawaii. She and her team have used these telescopes both on site in Hawaii and remotely from an observation room in UCLA’s department of physics and astronomy.

Black holes have such high density that nothing can escape their gravitational pull, not even light. (They cannot be seen directly, but their influence on nearby stars is visible and provides a signature. Once something crosses the “event horizon” of a black hole, it will not be able to escape. However, the star S0-2 is still rather far from the event horizon, even at its closest approach, so its photons do not get pulled in.) 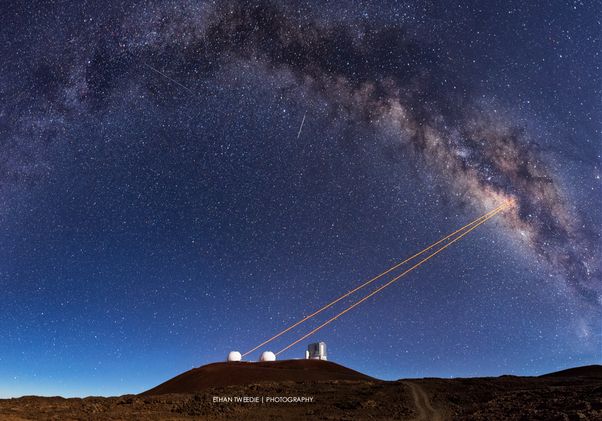 Lasers from the two Keck telescopes point in the direction of the center of our galaxy. Each laser creates an “artificial star” that astronomers can use to correct for the blurring caused by the Earth’s atmosphere. Photo: Ethan Tweedie

The National Science Foundation has funded Ghez’s research for the last 25 years. More recently, her research has also been supported by the W.M. Keck Foundation, the Gordon and Betty Moore Foundation and the Heising-Simons Foundation; as well as Lauren Leichtman and Arthur Levine, and Howard and Astrid Preston.

In 1998, Ghez answered one of astronomy’s most important questions, helping to show that a supermassive black hole resides at the center of our Milky Way galaxy. The question had been a subject of much debate among astronomers for more than a quarter of a century.

A powerful technology that Ghez helped to pioneer, called adaptive optics, corrects the distorting effects of the Earth’s atmosphere in real time. With adaptive optics at Keck Observatory, Ghez and her colleagues have revealed many surprises about the environments surrounding supermassive black holes. For example, they discovered young stars where none was expected to be seen and a lack of old stars where many were anticipated. It’s unclear whether S0-2 is young or just masquerading as a young star, Ghez said.

In 2000, she and colleagues reported that for the first time, astronomers had seen stars accelerate around the supermassive black hole. In 2003, Ghez reported that the case for the Milky Way’s black hole had been strengthened substantially and that all of the proposed alternatives could be excluded.

In 2005, Ghez and her colleagues took the first clear picture of the center of the Milky Way, including the area surrounding the black hole, at Keck Observatory. And in 2017, Ghez’s research team reported that S0-2 does not have a companion star, solving another mystery.