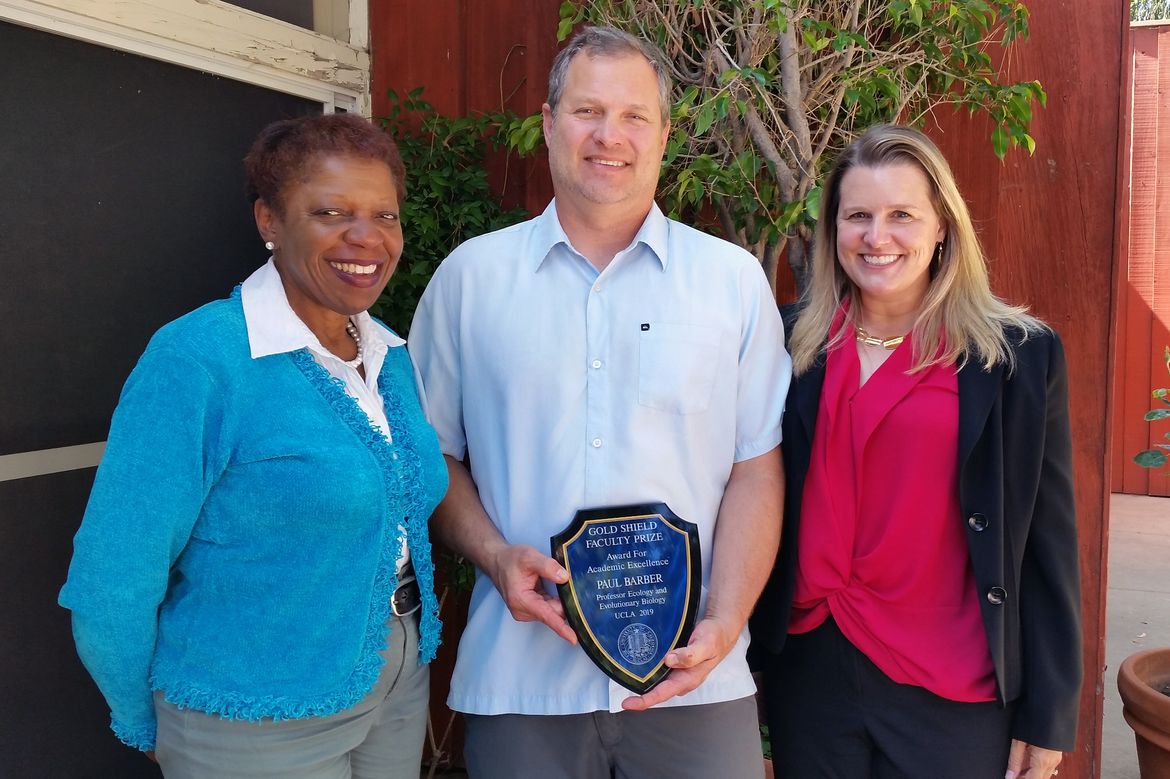 In the very first day of his “Introduction to Marine Science” class, Paul Barber tells his students an amusing story about himself. It has to do with how a guy from Tucson, Arizona — in the middle of the Sonoran Desert — became a marine scientist.

Full of twists and turns, the story is also an inspiring one. It tells how Barber, a professor of ecology and evolutionary biology, grew up in a low-income family and attended an inner-city middle school where he once had a .45 caliber handgun pointed at his head.

“It was in the middle of class, and my teacher never even noticed,” Barber said.

Military recruiters, not college recruiters, came to Barber’s high school. But he studied hard and won a full-ride Flinn Foundation scholarship, which enabled him to attend the University of Arizona. His interest in terrestrial evolutionary genetics was sparked by classes in animal behavior and herpetology, which is the study of amphibians and reptiles. Yet it took a roundabout series of adventures while he was a graduate student at UC Berkeley — involving frogs, mongooses, hyenas, clownfish and mantis shrimp — to bring him to his current position at UCLA.

It’s this humility that endears Barber to both his students and his peers, several of whom endorsed him for the 2019 Gold Shield Faculty Prize — a $30,000 award presented annually by Gold Shield, Alumnae of UCLA, to an exceptional mid-career full professor with a distinguished record of undergraduate teaching, research and university service.

Almost since his arrival at UCLA in 2008, Barber has served as the director of the Program for Excellence in Education and Research in the Sciences, known as PEERS, a two-year program for outstanding students who wish to pursue careers in the life or physical sciences. In particular, PEERS emphasizes the recruitment and retention of students from groups traditionally underrepresented in science. Studies of the program show that its students are nearly twice as likely to complete a science degree and earn better grades than similar students not in PEERS.

Equally impressive is a summer program Barber founded 16 years ago, The Diversity Project, that he now runs with UCLA colleague Peggy Fong, also a professor of ecology and evolutionary biology. The Diversity Project is designed to increase diversity in marine science — a field with a very low percentage of traditionally underrepresented minorities — and provides undergraduate students with opportunities to conduct research outside the United States, ultimately inspiring them to continue in marine science.

“We go to amazing places, like Indonesia, that have the most diverse and spectacular coral reefs on the planet,” Barber said. Nearly 70% of program alumni go on to graduate school. Among the schools from which they have earned degrees: Harvard, Stanford, UC Santa Cruz, the Scripps Institution of Oceanography and UCLA.

“Dr. Barber is a strong mentor, and I know for a fact that I am a stronger scientist because of his support,” said Camille Gaynus, an alumna of The Diversity Project. “His mentorship is embedded in me, and I strive to pass on the same sentiments to the undergrads and high school students I currently mentor. Because of Dr. Barber, I know I will become a professor and continue to provide opportunities to young scientists, particularly Black females like myself.”