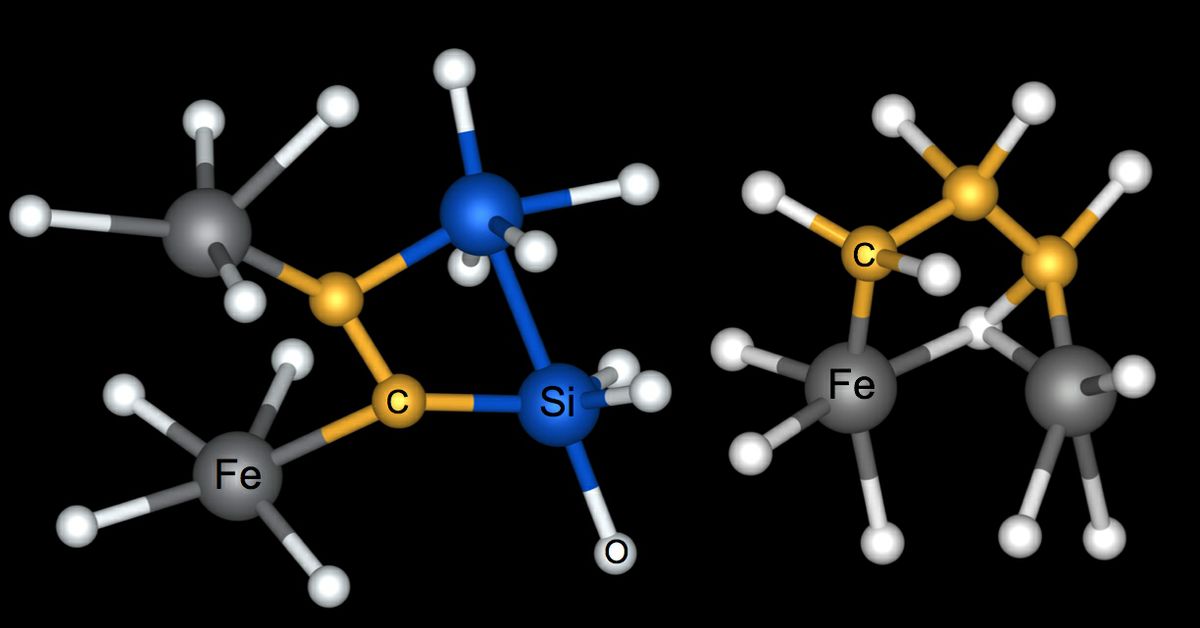 New simulations suggest that carbon (C) routinely bonded with iron (Fe), silicon (Si) and oxygen (O) deep within the magma ocean that covered Earth when it was young.

Most people behave differently when under extreme pressure. Carbon and ice are no different.

Two new studies show how these key planetary ingredients take on exotic forms that could help researchers better understand the composition of Earth’s core as well as the cores of planets across the galaxy. Craig Manning, a UCLA professor of geology and geochemistry, is a co-senior author of one of the papers, which was published today in the journal Nature, and senior author of the other, which was published in Nature Communications in February.

The Nature Communications paper revealed that high pressure deep inside the young Earth may have driven vast stores of carbon into the planet’s core while also setting the stage for diamonds to form. In the Nature report, researchers found that water ice undergoes a complex crystalline metamorphosis as the pressure slowly ratchets up.

Scientists have long understood that the amount of carbon sequestered in present-day Earth’s rocks, oceans and atmosphere is always in flux because the planet shuffles the element around in a vast cycle that helps regulate climate. But researchers don’t know whether the Earth locked away even more carbon deep in its interior during its formative years — information that could reveal a little more about how our planet and others like it are built.

To pursue an answer to that question, Manning and colleagues calculated how carbon might have interacted with other atoms under conditions similar to those that prevailed roughly 4.5 billion years ago, when much of Earth was still molten. Using supercomputers, the team created simulations to explore what would happen to carbon at temperatures above 3,000 degrees Celsius (more than 5,400 degrees Fahrenheit) and at pressures more than 100,000 times of those on Earth’s surface today.

The experiment revealed that under those conditions, carbon tends to link up with iron, which implies that there might be considerable quantities of carbon sealed in Earth’s iron core today. Researchers had already suspected that in the young planet’s magma ocean, iron atoms hooked up with one another and then dropped to the planet’s center. But the new research suggests that this molten iron rain may have also dragged carbon down with it. Until now, researchers weren’t even sure whether carbon exists down there.

The team also found that as the pressure ramps up, carbon increasingly bonds with itself, forming long chains of carbon atoms with oxygen atoms sticking out.

“These complex chains are a form of carbon bonding that we really hadn’t anticipated at these conditions,” Manning said.

Such molecules could be a precursor to diamonds, which consist of many carbon atoms linked together.

The machinations of carbon under pressure provide clues as to how Earth-like planets are built. Frozen planets and moons in other solar systems, however, may also have to contend with water ice. In a separate paper, Manning and another team of scientists looked at how the molecular structure of extremely cold ice changes when put under intense pressure.

Under everyday conditions, water ice is made up of molecules laid out in honeycomb-like mosaics of hexagons. But when ice is exposed to crushing pressure or very low temperature — in labs or possibly deep inside remote worlds — the molecules can assume a bewildering variety of patterns.

One of those patterns, known as amorphous ice, is an enigma. In amorphous ice, the water molecules eschew rigid crystalline order and take on a free-form arrangement. Manning and colleagues set out to try and understand how amorphous ice forms.

First, they chilled normal ice to about 170 degrees below zero Celsius (about 274 degrees below zero Fahrenheit). Then, they locked the ice in the jaws of a high-tech vice grip inside a cryogenic vacuum chamber. Finally, over the span of several hours, they slowly stepped up the pressure in the chamber to about 15,000 times atmospheric pressure. They stopped raising the pressure periodically to fire neutrons through the ice so that they could see the arrangement of the water molecules.

Surprisingly to the researchers, the amorphous ice never formed. Instead, the molecules went through a series of previously known crystalline arrangements.

However, when the researchers conducted the same experiment but raised the pressure much more rapidly — this time in just 30 minutes — amorphous ice formed as expected. The results suggest that time is the secret ingredient: When pressure increases slowly, tiny seeds of crystalline ice have time to form and take over the sample. Otherwise, those seeds never get a chance to grow.

The findings, published May 23 in the journal Nature, could be useful to researchers who study worlds orbiting other suns and are curious about what conditions might be like deep inside frozen planets.

“It’s entirely likely that there are planets dominated by ice in other solar systems that could obtain these pressures and temperatures with ease,” Manning said. “We have to have this right if we’re going to have a baseline for understanding the interiors of cold worlds that may not be like Earth.”

Both papers were funded in part by the Deep Carbon Observatory, a 10-year program started in 2009 to investigate the quantities, movements, forms and origins of deep carbon inside Earth. The Nature Communications paper was also funded by the European Research Council and was co-authored by researchers at the Ecole Normale Supérieure de Lyon in France, one of whom — Natalia Solomatova — completed her undergraduate studies at UCLA. The Nature paper was co-authored by UCLA geologist Adam Makhluf and researchers from Oak Ridge National Laboratory and the National Research Council of Canada.

UCLA psychologist on why we should embrace aging