Consuming fructose, a sugar that’s common in the Western diet, alters hundreds of brain genes that may be linked to many diseases, UCLA life scientists report. However, they discovered good news as well: an important omega-3 fatty acid known as DHA (docosahexaenoic acid) seems to reverse the harmful changes produced by fructose.

“DHA changed not just one or two genes, but seems to push the entire gene pattern back to normal, which is remarkable, and we can see why it has such a powerful effect,” said Xia Yang, a senior author of the study and a UCLA associate professor of integrative biology and physiology.

DHA is found in brain cell membranes, but “the brain and the body are deficient in the machinery to make DHA; it has to come through our diet,” said co-senior author Fernando Gomez-Pinilla, a UCLA professor of neurosurgery and of integrative biology and physiology.

DHA, which strengthens synapses in the brain and enhances learning and memory, is abundant in wild salmon and, to a lesser extent, in fish oil and other fish, while its biochemical precursors are high in walnuts, flaxseed, and to a less extent, fruits and vegetables, Gomez-Pinilla said.

Americans consume most of their fructose from processed foods sweetened with high-fructose corn syrup, an inexpensive liquid sweetener made from cornstarch, as well as from sweet drinks, syrups, honey, ice cream and other desserts, he said. It’s also in baby food. Fruit contains fructose, but has high levels of fiber, which substantially slows the absorption of fructose and increases the feeling of fullness, Yang said. Fruits also contain many other healthy components that protect the brain and body, they noted.

The researchers trained laboratory rats to escape from a maze, then randomly divided the rats into three groups. They gave one group of rats water with fructose added for six weeks that would be roughly equivalent to a person drinking about a liter of soda a day. A second group of rats was given the water with fructose and a diet rich in DHA for six weeks, and a control group was given water without fructose and not given the DHA supplement. 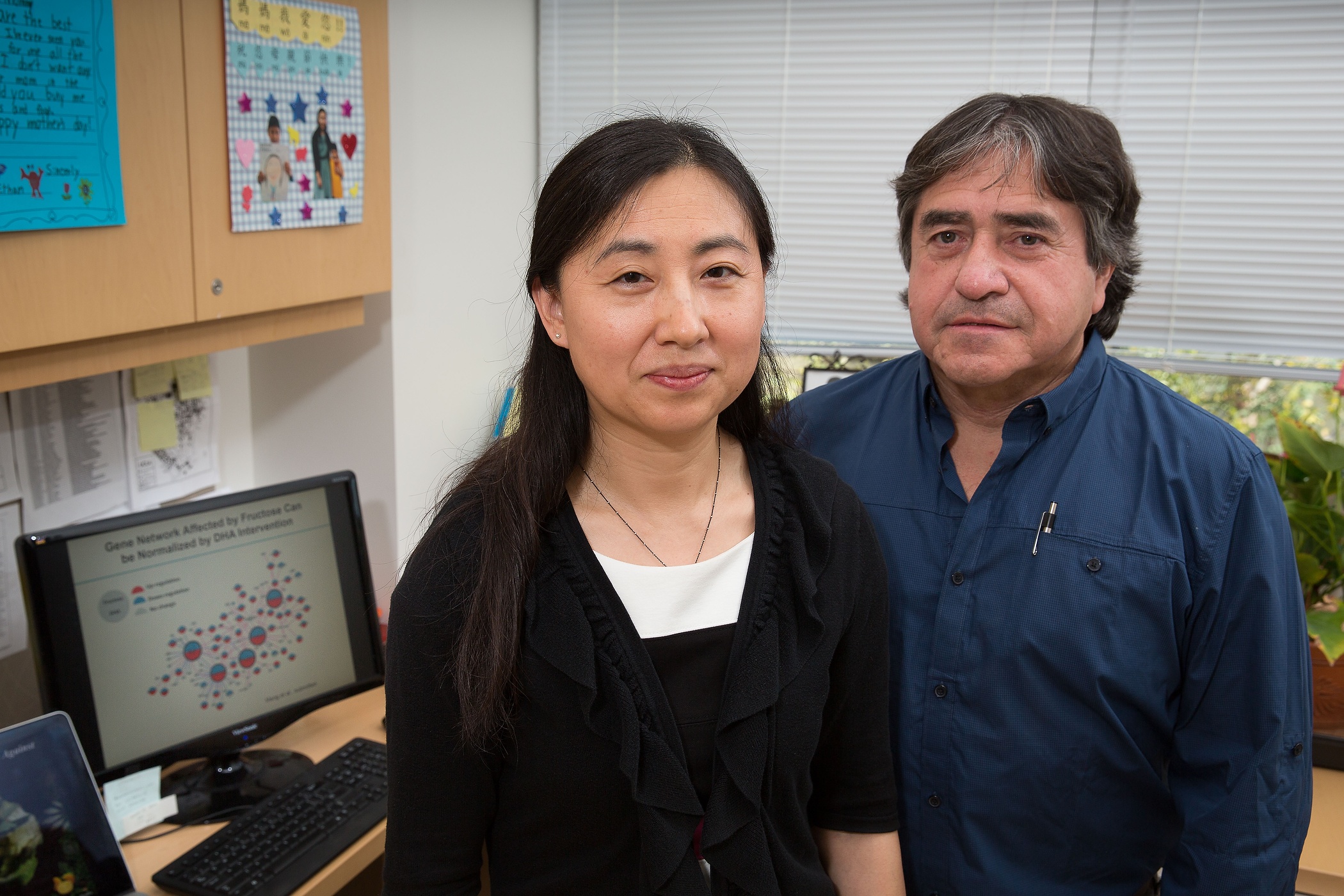 Humans have genes that are counterparts to the genes affected by fructose in rats, and the human genes are associated with obesity, diabetes, cardiovascular disease, Alzheimer’s disease, Parkinson’s disease, depression, bipolar disorder, attention-deficit hyperactivity disorder (ADHD) and other brain diseases, said Yang, a member of UCLA’s Institute for Quantitative and Computational Biosciences.

The researchers identified two genes, called Bgn and Fmod, that are important for cell communication, and are potential targets for new pharmaceuticals. Fructose seems to act first on these genes, which then affect many other genes, in a cascade effect, Yang said. After the researchers removed these genes in mice, the mice had substantially higher levels of cholesterol and triglycerides.

The research, which used state-of-the-science genomic technology, was published last year in the journal EBioMedicine.

This research is the first comprehensive genomics study of all the genes, pathways and gene networks affected by high fructose consumption in brain regions controlling metabolism and brain function.

How food affects the brain

Gomez-Pinilla recommends reducing the sugar and saturated fat we consume, including reducing drinking soda and eating dessert. “Food is like a pharmaceutical compound that affects the brain,” said Gomez-Pinilla, also a member of UCLA’s Brain Injury Research Center.

Gomez-Pinilla’s laboratory; and colleagues from UCLA, the National Institutes of Health and Icahn School of Medicine at Mount Sinai in New York.

In February 2017, Yang, Gomez-Pinilla and colleagues reported in EBioMedicine that head injuries can adversely affect hundreds of genes in the brain that put people at high risk for diseases including Alzheimer’s, Parkinson’s, 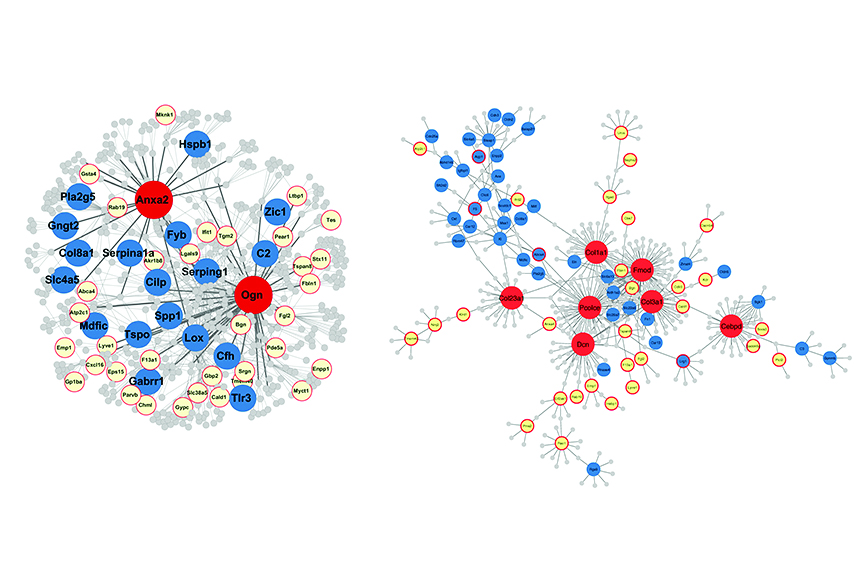 Examples of gene networks in the hippocampus affected by brain trauma. UCLA researchers report that the “master regulator” genes (in red) influence many other genes responsible for the effects of brain trauma.

“Very little is known about how people exposed to brain trauma, such as football players and soldiers, develop symptoms for other neurological disorders later in life. We hope to learn much more,” Gomez-Pinilla said.

The researchers have identified for the first time potential master genes, which they believe control hundreds of other genes that they linked to many neurological and psychiatric disorders. These master genes are likely targets for new pharmaceuticals to potentially treat many diseases of the brain.

“We believe these master genes are a kind of hub responsible for traumatic brain injury adversely triggering changes in many other genes,” Yang said.

Traumatic brain injury can do damage first to the master genes and then to other “downstream genes” in a couple of ways, she said. One way is to produce different forms of a protein. Another is to reduce, or increase, the number of expressed copies of a gene in each cell. Both can prevent a gene from properly performing its cellular function.

“If a gene turns into the wrong form of protein, it could lead to Alzheimer’s disease, for example,” Gomez-Pinilla said.

Implications for treating a range of diseases

More than 100 of the genes that changed following the brain injury have human counterparts that have been linked to Alzheimer’s disease, Parkinson’s disease, ADHD and other neurological and psychiatric disorders, the researchers report.Targeting these genes to treat disease seems promising. “We now know which genes are affected by traumatic brain injury and linked to serious disease, and have predicted which genes are the likely master regulators that may have strong therapeutic potential,” Yang said.

The research team is further studying whether modifying some of the master genes also modifies large numbers of other genes. If so, then targeting the master genes will be even more promising.

One of the genes, Fmod, is also a master regulator in the brain that becomes altered by fructose.

The research may lead to new treatments for traumatic brain injury to get the genes to return to their normal state. In addition the researchers potentially could target and modify the master genes so they won’t lead to disease. They may also be able to identify chemical compounds and foods that can fight disease.