You are here: Home / Biological Sciences 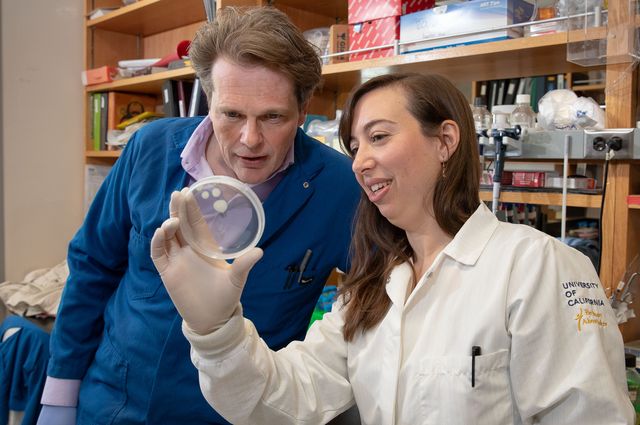 Research by UCLA professor Kent Hill and graduate student Stephanie DeMarco, as well as colleagues at the University of Bern, could lead to new approaches to treat African sleeping sickness.

Life scientists from UCLA and the University of Bern have identified a key gene in the transmission of African sleeping sickness — a severe disease transmitted by the bite of infected tsetse flies, which are common in sub-Saharan Africa.

The disease is fatal if untreated, as the parasite responsible moves from the bloodstream to the central nervous system. Tens of millions of people in 36 African countries are at risk. There is no vaccine, and conventional drug treatments, which include an arsenic derivative, are antiquated, not very effective and have severe side effects.

The research, published in the journal Nature Communications, could lead to new approaches to treat the disease. It also provides scientists with the first detailed understanding of how the parasite moves through the fly and what genes enable it to do so.

The tiny, single-celled parasite that causes African sleeping sickness in humans, and debilitating diseases in other mammals, is called Trypanosoma brucei, or T. brucei. To become infectious, the parasite must travel through tissues of the fly, from the midgut to the salivary gland — and then into the human or other animal, through a bite.

In the study, Stephanie DeMarco, a UCLA graduate student in molecular biology, and Sebastian Shaw, a graduate student at Switzerland’s University of Bern, worked with two sets of the T. brucei parasite. In one set, they made a mutation in one of the parasite’s genes, called phosphodiesterase-B1, or PDEB1.

Then, they infected 2,000 tsetse flies with some 20,000 parasites each — half of the flies received blood containing normal T. brucei parasites and the other half received blood with the mutated versions.

When tsetse flies drink infected blood, the parasites from the blood typically travel to the midgut and then into a tissue closer to the head, called the proventriculus, before moving on to the salivary glands.

Shaw said, “When we saw the huge difference between the mutants and normal parasites, at first we couldn’t believe it.”

Kent Hill, a UCLA professor of microbiology, immunology and molecular genetics, and one of the study’s senior authors, said the findings also suggested that there must be a barrier preventing the mutants from getting from the midgut to the proventriculus.

To learn where that barrier is, the scientists made fluorescent parasites and fed the flies a fluorescent dye that stained different tissues in the fly different colors, enabling the researchers to track the parasites.

“We found the normal parasites could get through the peritrophic matrix just fine, but the mutants were mostly stuck on one side of it,” DeMarco said.

That finding indicated that the peritrophic matrix was the barrier the scientists were looking for.

The research identifies for the first time the genes that enable the parasites to sense where they are and allow them to survive their journey in fly tissues; those mechanisms had not been understood well until now.

“We think the way the parasites perceive where they are may be similar in the tsetse flies and in mammals — including humans — as they go through barriers and tissues,” said co-senior author Isabel Roditi, a University of Bern professor. “If so, there could potentially be a new drug that might disrupt their ability to do that.”

The researchers also uncovered another clue to African sleeping sickness: In parasites with mutated PDEB1, there was a dramatic increase in the number of cyclic AMP molecules, signaling molecules that play an important role in the disease.

Normal parasites are social and coordinate their behavior, DeMarco said. But the research revealed that without PDEB1, the parasites have too much cyclic AMP in their cells and can’t communicate with one another.

“When Sebastian and Stephanie got rid of PDEB1, the parasites got flooded with cyclic AMP,” Hill said. “Then, when the signal came in telling the parasites, ‘You’re in the stomach and you need to move,’ they couldn’t hear the sound. That’s what we think the problem is for the mutant parasites.”

Hill said the new insights from the UCLA–Bern study could apply to other disease-causing parasites as well. For example, T. brucei parasites are related to parasites found in the U.S. and elsewhere that cause Chagas disease, in which parasites invade heart tissue, leading to inflammation and enlarged heart tissue, and in some cases, heart failure. 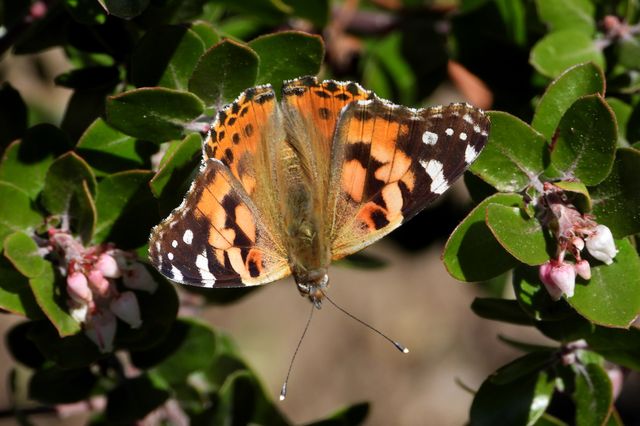 A painted lady butterfly taking a rest in UCLA’s Mildred E. Mathias Botanical Garden during a mass migration in 2019.

You’ve seen the butterflies fluttering across Los Angeles and speeding through campus. You’re likely to see them for another couple of weeks, according to research scientist Jeff Holmquist, a community ecologist at the UCLA White Mountain Research Center and the UCLA Institute of the Environment and Sustainability.

Holmquist explained in an interview why there are so many butterflies this year and why he’s betting on this species despite climate change. He also clarifies that the migration has nothing to do with the wildflower super bloom, and why that yellow splat on your windshield is the same thing that helps the butterflies make their migration — and what makes butterflies a nutritious snack.

Where are these butterflies coming from?

These are painted lady butterflies. They have a famous migration pattern. They winter in various places in northern Mexico and Southern California like the Mojave Desert. They prefer open habitat like desert, sage growth and meadows.

Why are we seeing so many in Los Angeles right now?

The big migration years seem to be in wet years, when there’s a lot of food for the caterpillars. Big rain years like the one we just had are just huge for the forage plants that they eat. So the female will lay individual eggs on plants, and they hatch in about 5 to 7 days. The caterpillars just eat and eat for a few days, then make a chrysalis.

I’ve been studying invertebrates my whole career, and butterflies are just extraordinary. To reorganize the body like that takes a huge amount of energy. You may as well imagine eating like crazy for a week, crawling into a sleeping bag for a few weeks, and coming out as an eagle.

Do they migrate every year?

Normally we see a few here, a few there, but yes, there’s always a migration. They’re very fast fliers. They can go about 20 miles per hour, and they’ve been clocked at 25. If I can maintain about 25 miles per hour on my bike, I can fly along with the butterfly flight. It’s quite fun. I’m looking forward to the migration making it north where I am in a few weeks. They also have a return migration that tends to be at high altitude. There’s some mystery there, because it’s really unknown by scientists how frequently they migrate at high altitude. We may be missing some of the picture because they fly quite high.

Are they attracted by the super bloom of wildflowers in Southern California right now?

It’s more that they fly at the same time that flowers bloom. As you’ve seen, they’re on a mission. They’re not stopping to feed. Right now, they’re living on their fat reserves. They’re very good at turning their food into energy in the form of lipids — that is, fat. They have to take a backpack full of food, essentially, to make this migration, and for them that’s an abdomen full of fat. If you see them hit your windshield, you’ll see that yellow splat, and that’s the lipids.

Fat reserves are very important for a lot of insects, and that’s part of why many societies are rediscovering them as food right now, or have traditionally eaten them. Butterflies are very fatty.

I’ve heard of insects as high-protein, but not fatty.

Oh yeah, they’re like little chicharrones. I have a project going right now with our local Paiute tribe, and butterflies are an important traditional Native American food. The Paiute use a different species, but they catch the caterpillars, then roast, salt and boil them, and they preserve very well throughout the year.

Is the change in this year’s migration related to climate change?

My sense is that over time we can expect to see earlier migrations, as the climate warms. I’m not sure this year’s is early, though. And there’s the unknown factor of rain. A lot of butterfly booms are cyclical, but this one is really driven by rains. In a year with more rain, we would anticipate another large migration.

Are there other ways that climate change could interfere with painted ladies?

It’s possible. They might get too hot earlier. But I wouldn’t bet against the painted lady. It’s probably the world’s most widely distributed butterfly, living everywhere but South America and Antarctica. It’s very well-adapted. There’s a very large migration in Eurasia that’s even more striking than what we have right now, and one that goes from the Sahara to England.

A lot of species are very specific in their choice of host plants, but painted ladies aren’t picky. They’re real generalists. They eat lots of thistles, sage, sunflower and mallow plants. So they’re fine. But we’re in danger of losing so many other species.

As long as people have butterflies on the brain right now, what can they do to support butterflies and biodiversity?

Plant some milkweed. While painted ladies eat lots of plants, monarch butterflies need milkweed. People need to plant the native northern milkweed — the southern, more tropical milkweeds don’t have the same seasonal cycle, and that may remove an important migration cue for monarchs. Other than that, any good nectar plants are good for a butterfly garden.

For painted ladies, maybe slow down a little if you see them while you’re driving. I brake for butterflies. But that may not be the thing to do on the freeway.

Any other advice about the migration?

Enjoy it. This is nature’s fireworks display.