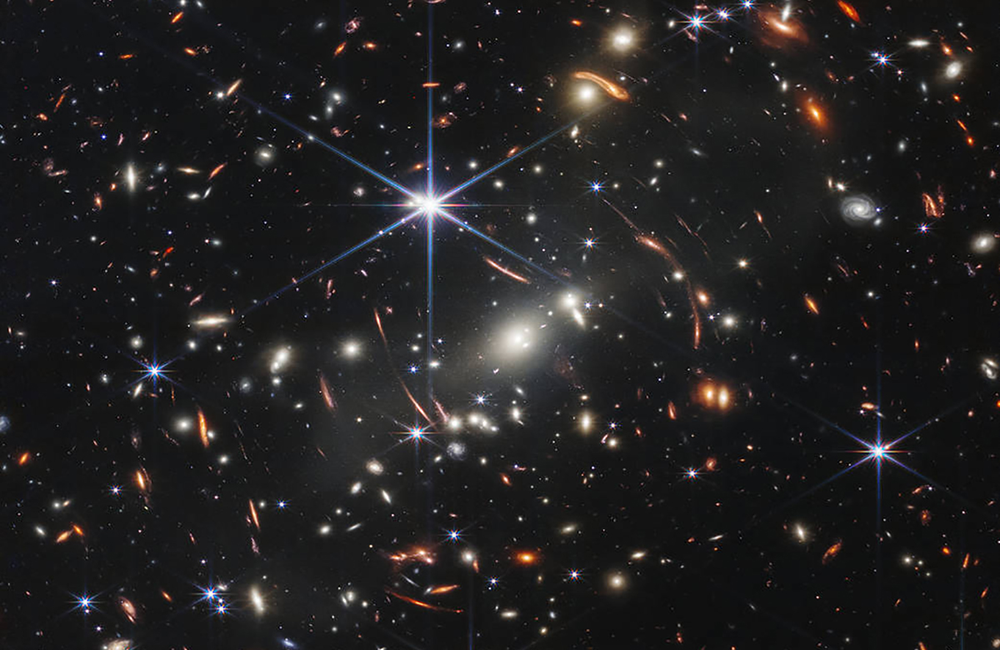 An image from the James Webb Space Telescope. A pair of UCLA-led studies demonstrate some of the scientific advances that the telescope is making possible. | NASA

Key takeaways:
• UCLA astrophysicists are among the first scientists to use the James Webb Space Telescope to get a glimpse of the earliest galaxies in the universe.
• The studies reveal unprecedented detail about events that took place within the first billion years after the Big Bang.
• The UCLA projects were among a small number selected by NASA to test the capabilities of the Webb telescope.

The earliest galaxies were cosmic fireballs converting gas into stars at breathtaking speeds across their full extent, reports a UCLA-led study published in a special issue of the Astrophysical Journal.

The research, based on data from the James Webb Space Telescope, is the first study of the shape and structure of those galaxies. It shows that they were nothing like present-day galaxies in which star formation is confined to small regions, such as the constellation of Orion in our own Milky Way galaxy.

“We’re seeing galaxies form new stars at an electrifying pace,” said Tommaso Treu, the study’s lead author, a UCLA professor of physics and astronomy. “Webb’s incredible resolution allows us to study these galaxies in unprecedented detail, and we see all of this star formation occurring within the regions of these galaxies.”

Treu directs the GLASS–JWST Early Release Science Program, whose first results are the subject of the special journal issue. Another UCLA-led study in the issue found that galaxies that formed soon enough after the Big Bang — within less than a billion years — might have begun burning off leftover photon-absorbing hydrogen, bringing light to a dark universe.

“Even our very best telescopes really struggled to confirm the distances to such far away galaxies, so we didn’t know whether they rendered the universe transparent or not,” said Guido Roberts-Borsani, a UCLA postdoctoral researcher who led the study. “Webb is showing us that not only can it do the job, but it can do it with astonishing ease. It’s a game changer.”

Those findings are two of many breathtaking discoveries by UCLA astrophysicists who are among the first to peer through a window to the past newly opened by Webb.

Webb is the largest near-infrared telescope in space, and its remarkable resolution offers an unparalleled view of objects so distant that their light takes billions of years to reach Earth. Although those objects have aged by now, light from only their earliest moments has had enough time to travel through the universe to end up on Webb’s detectors. As a result, not only has the Webb functioned as a sort of time machine — taking scientists back to the period shortly after the Big Bang — but the images it’s producing have become a family album, with snapshots of infant galaxies and stars.

GLASS–JWST was one of 13 Early Release Science projects selected by NASA in 2017 to quickly produce publicly accessible datasets and to demonstrate and test the capabilities of instruments on the Webb.

The project seeks to understand how and when light from the first galaxies burned through the hydrogen fog left over from the Big Bang — a phenomenon and time period called the Epoch of Reionization — and how gas and heavy elements are distributed within and around galaxies over cosmic time. Treu and Roberts-Borsani use three of the Webb’s innovative near-infrared instruments to take detailed measurements of distant galaxies in the early universe.

The Epoch of Reionization is a period that remains poorly understood by scientists. Until now, researchers have not had the extremely sensitive infrared instruments needed to observe galaxies that existed then. Prior to cosmic reionization, the early universe remained devoid of light because ultraviolet photons from early stars were absorbed by the hydrogen atoms that saturated space.

Scientists think that sometime within the universe’s first billion years radiation emitted by the first galaxies and possibly by the first black holes caused the hydrogen atoms to lose electrons, or ionize, preventing photons from “sticking” to them and clearing a pathway for the photons to travel across space. As galaxies began to ionize larger and larger bubbles, the universe became transparent and light traveled freely, as it does today, allowing us to view a brilliant canopy of stars and galaxies each night.

Professor’s book spotlights legacy of Mexican political organizers in the...
Scroll to top