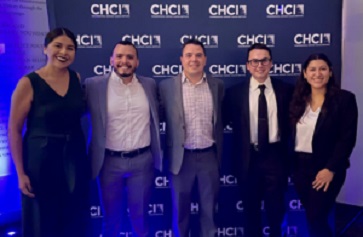 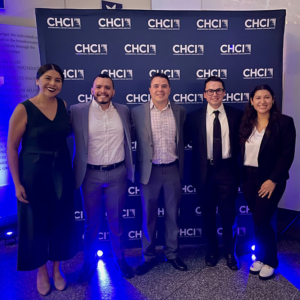 UCLA Latino Policy & Politics Institute (LPPI) experts and policy fellows were well represented at the Congressional Hispanic Caucus Institute (CHCI) Leadership Conference in Washington, D.C. on September 12-15, 2022. CHCI is a leading national organization that convenes members of Congress and other public officials, corporate executives, nonprofit advocates, and thought leaders to discuss issues facing the nation and the Latino community. Taking place at the onset of Hispanic Heritage Month, the conference sought to highlight Latino excellence through an offering of 26 sessions featuring over 200 thought leaders and elected officials – including remarks from President Joe Biden and Vice President Kamala Harris.

Paul Barragan-Monge, director of mobilization at UCLA LPPI, and Rodrigo Domínguez-Villegas, UCLA LPPI director of research, were featured panelists in two different sessions during the week. Barragan-Monge spoke in a breakout session sponsored by UCLA LPPI centered on criminal justice reform. With Latinos accounting for increasingly higher percentages of people in U.S. prisons, the conversation focused on how policymakers and community leaders can pursue comprehensive justice reforms and support formerly incarcerated Latinos in successfully reintegrating back into their communities.

In a breakout session sponsored by Casey Family Programs, Domínguez-Villegas spoke on how to strengthen communities to reduce Latino family separation. From acute crises such as family separation at the border, to longstanding socioeconomic inequities, Domínguez-Villegas discussed with other panelists about the innovative policies and interventions needed to protect Latino families’ holistic safety and well-being.

Ruiz Fernandez had a powerful experience reconnecting with her former UCLA LPPI colleagues in the nation’s capital. Having recently graduated from UCLA with a B.A. in political science and chicana/o studies, Ruiz Fernández is now working as a financial analyst at the Consumer Financial Protection Bureau (CFPB) in Washington, D.C.

“Sharing a space filled with Latina/o trailblazers in public policy, as a UCLA LPPI alumni, highlighted the abundance of opportunities I have been granted as a result of mentors like Sonja Diaz and Rodrigo Domínguez-Villegas, who are dedicated to opening doors for young Latinos hoping to enact meaningful change across our communities,” Ruiz Fernández remarked.

González, now a second-year Master of Public Policy student at Georgetown University and intern for U.S. Senator Alex Padilla, was inspired by Latino leaders he met at the conference and the diverse fields they work in.

“Aside from reconnecting with my UCLA LPPI colleagues, my favorite aspect of the conference was networking with so many Latinos in public policy from a broad range of issues and sectors,” said González. “Hearing about the diversity of their work felt like a reminder of LPPI’s mantra that every issue really is a Latino issue.”

Perez, currently a Master of Public Policy student at UCLA, was likewise inspired by the community of Latino leaders with whom she was able to network – and some of the high-profile speakers.

“It was incredible to learn about the journeys of Latinos in different industries and network with empowering individuals, as well as reconnect with friends and mentors,” Perez shared. “One of the highlights was witnessing remarks by both the Vice President and President of the United States – who would have thought I would be there!”

Engaging with the world: Q&A with Abel Valenzuela, interim dean of social...

Humanities for the 21st century: A conversation with incoming dean Alex Ste...
Scroll to top