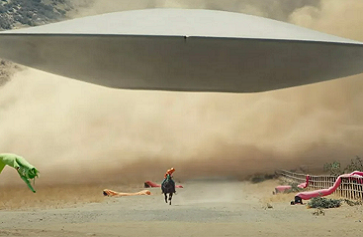 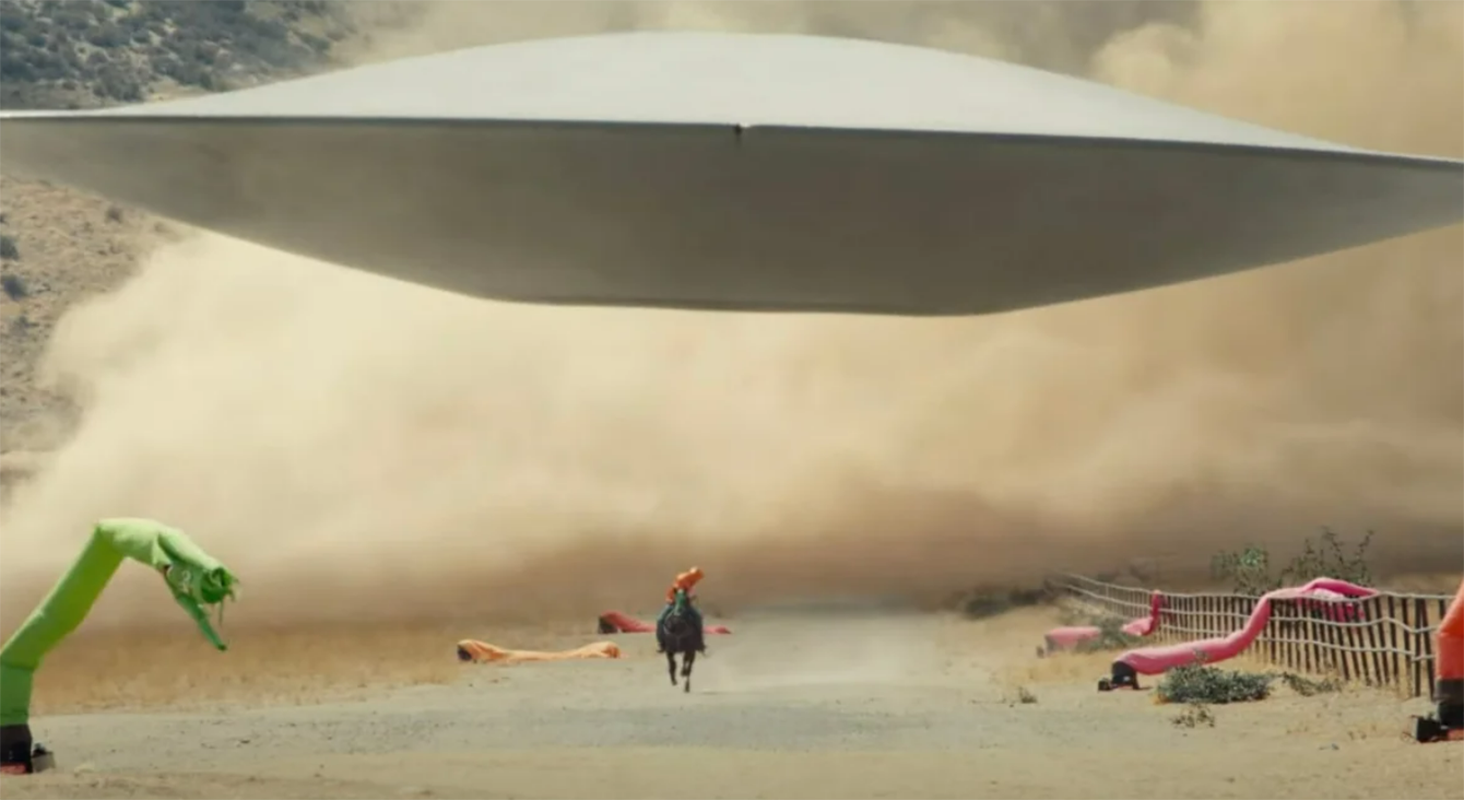 “Jordan Peele had a vision already, inspired by some animals, but he wanted to talk to a scientist to make it plausible and real. He wanted an animal that mesmerized its prey like a cuttlefish,” said UCLA doctoral student Kelsi Rutledge. | Universal Pictures

When Kelsi Rutledge came to UCLA to pursue graduate studies, she didn’t expect to land a side hustle in Hollywood. But her discovery of a new fish species attracted the attention of director Jordan Peele, and she enthusiastically accepted his invitation to help create a scientifically plausible alien for his latest movie, “Nope.”

The movie, which is in theaters now, tells the story of a small group of determined people who confront a dangerous species that appears to be from outer space.

Rutledge, who will receive her doctoral degree in ecology and evolutionary biology this fall, studies how rays and other fish smell chemicals in the ocean. The project was inspired by her master’s thesis on guitarfish, a type of ray that lacks a stinger.

“Someone collected these fishes in the Gulf of California and put them on the shelf at UCLA and in the Natural History Museum in Los Angeles but never examined them further,” Rutledge said. “When I was looking at them I thought some of them looked different, but I wasn’t sure at first.”

Discovering a new species is a big deal for a scientist at any stage of their career, even more so for a student just getting started on their graduate research. But what Rutledge did next surpassed science. She asked a professional photographer friend to take pictures of her cradling a museum specimen of the new species on the beach, and announced the discovery on Twitter in the manner of a glossy, social media-friendly birth announcement. The tweet quickly went viral and received media coverage from several prominent outlets, including Smithsonian Magazine.

In the this video, you can get a glimpse of the squid-like alien called “Jean Jacket.” | Universal Pictures

Rutledge said that one distinct feature of guitarfishes is their “weird nose,” which has many unique flap-like structures. She began comparing it to other rays and stingrays, and the project evolved into research for a doctoral degree.

“I look at it from both a biological and engineering point of view,” she said. “Why have these noses evolved to look the way they do? What are the design principles of building an underwater nose? Answering these questions could help inform underwater sensor technology.”

“I found that the shape of their nose correlates with how the rays swim, but how do their noses actually work?” she said.

Rutledge said she checked preserved specimens out from museums “like library books” and used a CT scanner at the UCLA hospital when it wasn’t in use to create accurate digital models of nose structures. She made 3-D printed physical models from the CT-scans that she put in a water tunnel, similar to a wind tunnel, injected with dye or miniscule, reflective glass balls to observe fluid dynamics around the nose in real time.

“The water tunnel experiments showed that the nose shape alone in some rays brings in water because there’s no pump,” Rutledge said. “If we can develop artificial sensors that don’t require a pump by just changing the sensor’s geometry, it would be an inexpensive way to increase the efficiency of the system.” 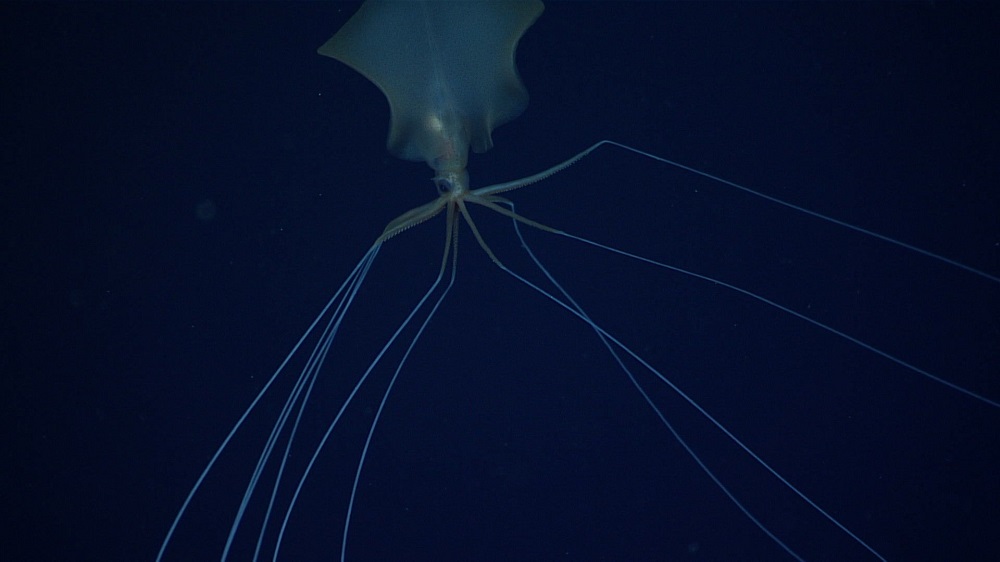 To do some of this research, Rutledge partnered with John Dabiri, an engineering professor at Caltech who studies fluid mechanics and flow physics. Peele had hired Dabiri to consult on the physics of his fictional alien to learn how fast it could fly and how rain would move around the animal, among other things. When Peele mentioned he was also looking for a biologist who understood how animals behaved and who had discovered a new species, Dabiri recommended Rutledge.

“Jordan Peele had a vision already, inspired by some animals, but he wanted to talk to a scientist to make it plausible and real. He wanted an animal that mesmerized its prey like a cuttlefish,” Rutledge said. “One way he wanted to display this mesmerization aspect was designing the movie’s creature with a square eyeball but he didn’t think any animals had them.”

Rutledge informed him octopuses have square pupils, and sent him reference photos.

“There’s a lot of marine animal inspiration in the way the alien moves, especially in its unfurled form, which is very similar to a bigfin squid, which have a beautiful billowing fin on their head. The alien moves in the sky like an octopus or squid, and its saucer form is directly modeled after the sand dollar. The creature’s ability to camouflage itself as a cloud is also based on octopuses, who have special skin cells that change color to blend in with the background,” Rutledge said.

Some of the most horrifying moments in the movie occur after the creature, called “Jean Jacket,” consumes its live prey, who scream from within the creature’s guts.

“The digestive system is based on that of an ocean creature called the giant larvacean, and also on birds’ digestive systems,” Rutledge said. “Birds swallow their food whole and store it in a crop. It passes into the gizzard where it is ground up by grit and rocks the birds have swallowed. As in larvaceans and birds, food is swallowed whole and passes through a labyrinth of canals.”

Using high-powered lasers to illuminate tiny particles in water, we can visually see the fluid dynamics of odor capture, which is the green particles going into the nose of a ray. | Kelsi Rutledge

With help from Rutledge and Dabiri, Peele created a world that looked like the one we are used to but felt like a marine environment, in which a predator above hunted smaller creatures living in the sand. To escape predation, people had to learn how to predict and deflect “Jean Jacket’s” behavior, as wild prey animals must. The result is a monster that terrifies and kills without true malice, a beautiful animal simply living the life nature meant it to live.

Rutledge’s work for “Nope” is not done yet.

Together with the movie’s main characters, Rutledge will co-author a fake scientific paper about the new species. The narrative will be that the characters reached out to Rutledge at UCLA to help them describe and name “Jean Jacket” for the scientific community. Rutledge will write it exactly as a real scientific paper — she has experience publishing about a new species, after all. The fake manuscript will take the form of a coffee table book with a cover that looks like the journal “Nature,” one of the world’s top scientific journals. “Jean Jacket’s” scientific name will be “Occulonimbus edoequus,” which means “hidden dark cloud, stallion-eater” in Latin.

After finishing her doctoral studies this fall, Rutledge hopes to join Dabiri’s Caltech lab as a postdoctoral scholar. And though her first and foremost passion is science, she’s ready to step up next time Hollywood comes calling.