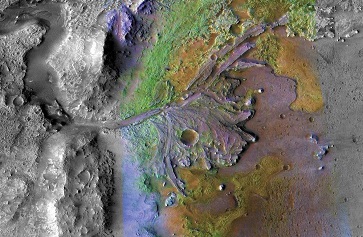 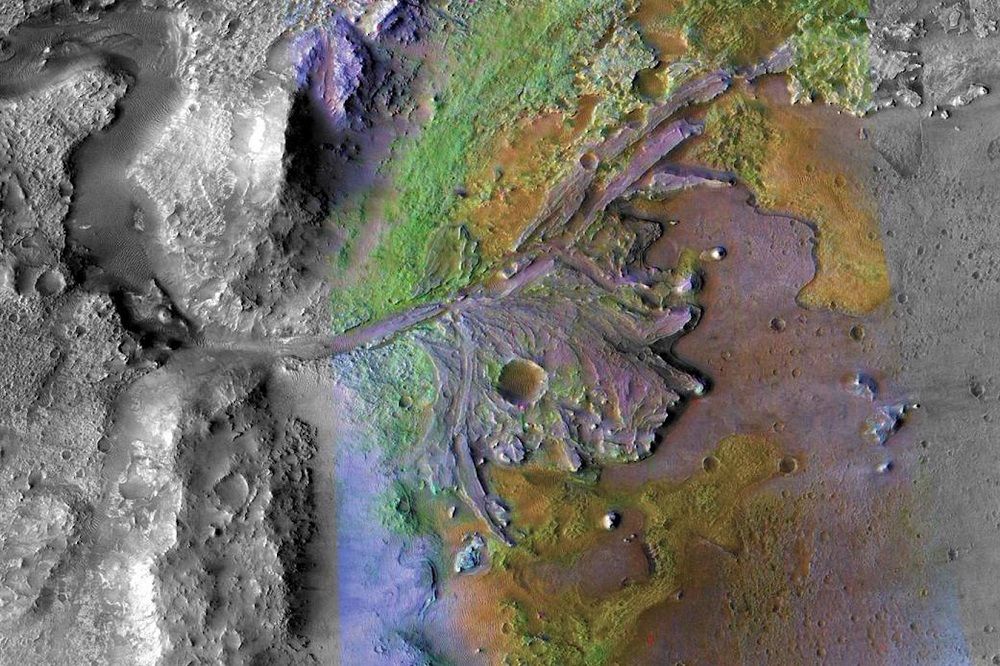 Aerial photo of the remains of a delta where a water source once fed an ancient lake at the Jezero crater. NASA’s Perseverance Rover is currently exploring the area. | NASA/JPL-Caltech/ASU

• Roving the Red Planet. NASA’s Perseverance landed on Mars in February 2021 and has been gathering data on the planet’s geology and climate and searching for signs of ancient life.
• What lies beneath. The rover’s subsurface radar experiment, co-led by UCLA’s David Paige, has returned images showing unexpected variations in rock layers beneath the Jezero crater.
• Probing the past. The variations could indicate past lava flows or possibly a river delta even older than the one currently being explored on the crater floor.

After a tantalizing year-and-a-half wait since the Mars Perseverance Rover touched down on our nearest planetary neighbor, new data is arriving — and bringing with it a few surprises.

The rover, which is about the size of car and carries seven scientific instruments, has been probing Mars’ 30-mile-wide Jezero crater, once the site of a lake and an ideal spot to search for evidence of ancient life and information about the planet’s geological and climatic past.

In a paper published today in the journal Science Advances, a research team led by UCLA and the University of Oslo reveals that rock layers beneath the crater’s floor, observed by the rover’s ground-penetrating radar instrument, are unexpectedly inclined. The slopes, thicknesses and shapes of the inclined sections suggest they were either formed by slowly cooling lava or deposited as sediments in the former lake. 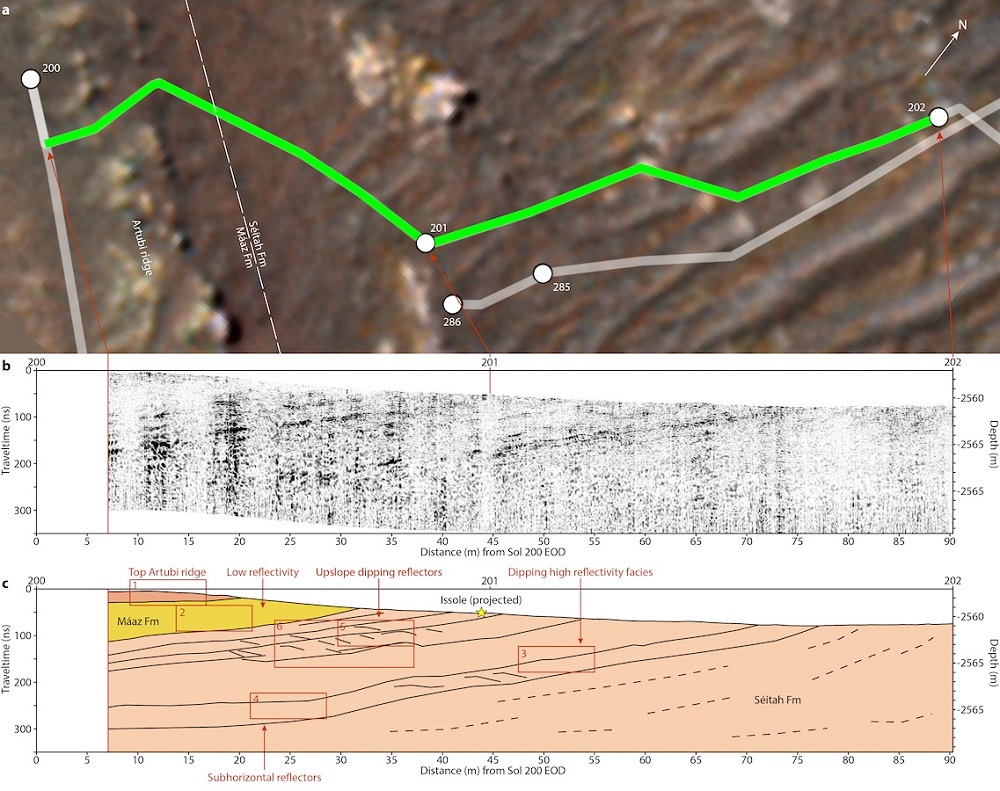 Perseverance is currently exploring a delta on the western edge of the crater, where a river once fed the lake, leaving behind a large deposit of dirt and rocks it picked up along its course. As the rover gathers more data, the researchers hope to clear up the complex history of this part of the Red Planet.

“We were quite surprised to find rocks stacked up at an inclined angle,” said David Paige, a UCLA professor of Earth, planetary and space sciences and one of the lead researchers on the Radar Imager for Mars Subsurface Experiment, or RIMFAX. “We were expecting to see horizontal rocks on the crater floor. The fact that they are tilted like this requires a more complex geologic history. They could have been formed when molten rock rose up towards the surface, or, alternatively, they could represent an older delta deposit buried in the crater floor.” 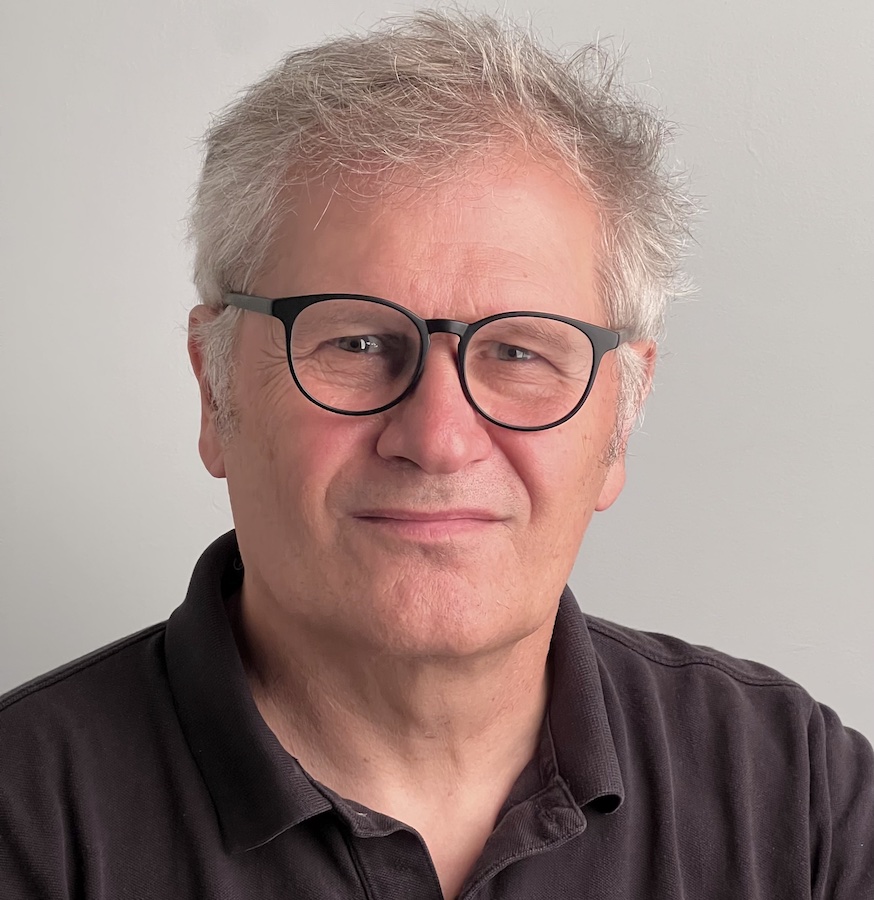 Paige said that most of the evidence gathered by the rover so far points to an igneous, or molten, origin, but based on the RIMFAX data, he and the team can’t yet say for certain how the inclined layers formed. RIMFAX obtains a picture of underground features by sending bursts of radar waves below the surface, which are reflected by rock layers and other obstacles. The shapes, densities, thicknesses, angles and compositions of underground objects affect how the radar waves bounce back, creating a visual image of what lies beneath.

During Perseverance’s initial 3-kilometer traverse, the instrument has obtained a continuous radar image that reveals the electromagnetic properties and bedrock stratigraphy — the arrangement of rock layers — of Jezero’s floor to depths of 15 meters, or about 49 feet. The image reveals the presence of ubiquitous layered rock strata, including those that are inclined at up to 15 degrees. Compounding the mystery, within those inclined areas are some perplexing highly reflective rock layers that in fact tilt in multiple directions.

“RIMFAX is giving us a view of Mars stratigraphy similar to what you can see on Earth in highway road cuts, where tall stacks of rock layers are sometimes visible in a mountainside as you drive by,” Paige explained. “Before Perseverance landed, there were many hypotheses about the exact nature and origin of the crater floor materials. We’ve now been able to narrow down the range of possibilities, but the data we’ve acquired so far suggest that the history of the crater floor may be quite a bit more complicated than we had anticipated.” 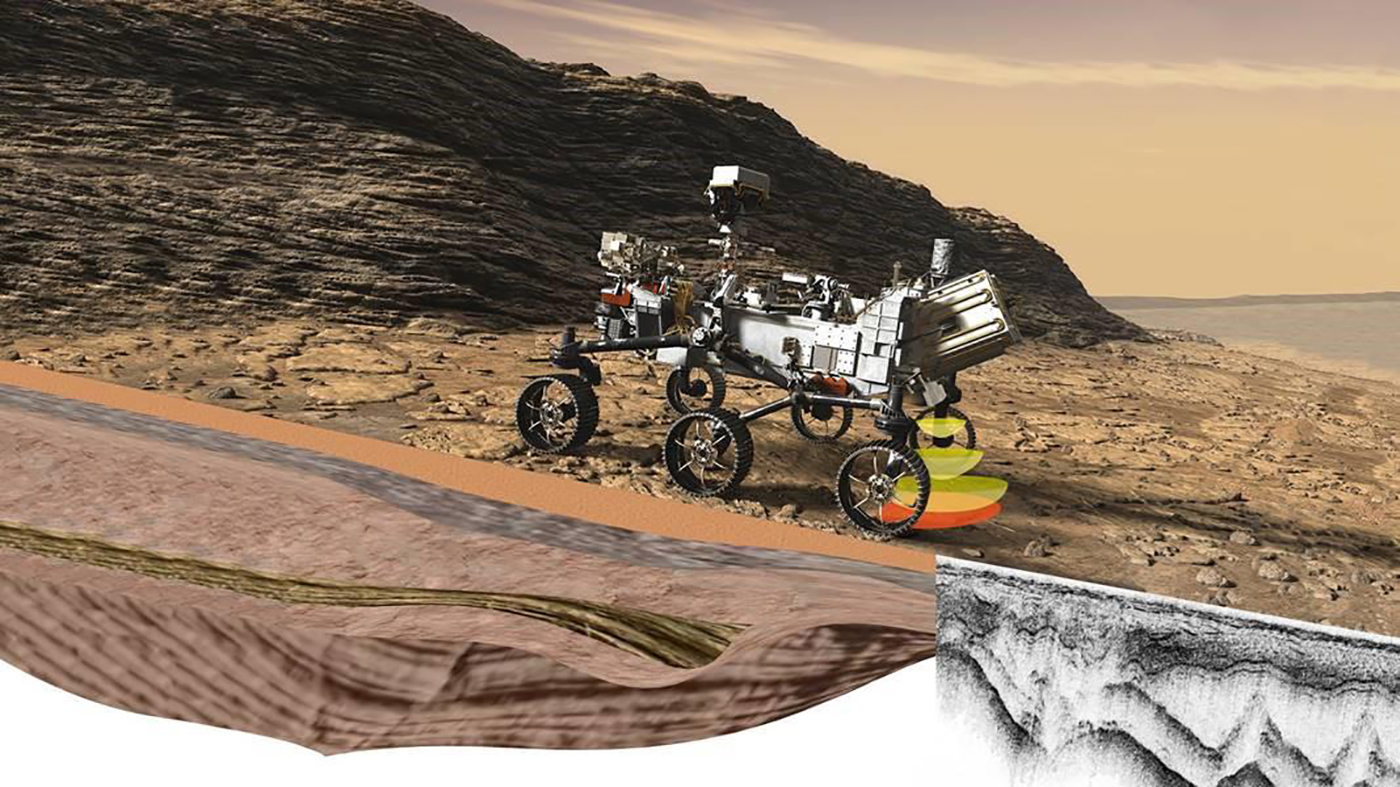 Rendering of Perseverance, whose RIMFAX technology is exploring what lies beneath the Martian surface. | NASA/JPL/Caltech/FFI

The data collected by RIMFAX will provide valuable context to rock samples Perseverance is collecting, which will eventually be brought back to Earth.

“RIMFAX is giving us the backstory of the samples we’re going to analyze. It’s exciting that the rover’s instruments are producing data and we’re starting to learn, but there’s a lot more to come,” Paige said. “We landed on the crater floor, but now we’re driving up on the actual delta, which is the main target of the mission. This is just the beginning of what we’ll hopefully soon know about Mars.”

The paper, “Ground penetrating radar observations of subsurface structures in the floor of Jezero crater, Mars,” is one of three simultaneously published papers discussing some of the first data from Perseverance.