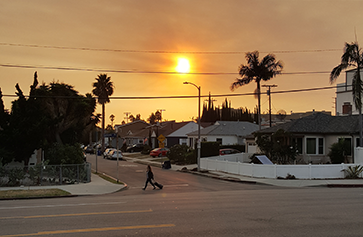 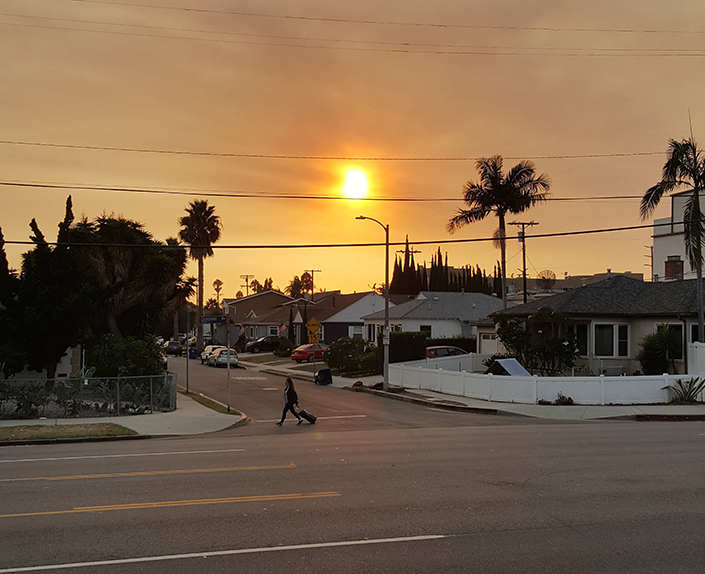 After decades of air quality improvement due to the Clean Air Act of 1970 and other regulations since, the Western U.S. is experiencing an increase in the number of days with extremely high levels of two key types of air pollutants due to climate change.

From 2000 to 2020, the growing number of wildfires — made more intense by climate change — and the increasingly common presence of stagnant, hot weather patterns combined to increase the number of days with hazardous levels of ground-level ozone and fine particulate matter. Those conditions are creating health risks for people throughout the region, according to a paper published in Science Advances.

Daniel Swain, a UCLA climate scientist and co-author of the paper, said the increased pollution affects densely populated regions across a broad swath of the West, including the Los Angeles basin, Salt Lake City, Denver and Oregon’s Willamette Valley. The study found that the number of days when both pollutant levels were extremely high increased in nearly every major city from the Pacific Coast to the eastern Rocky Mountains. (The scientists judged pollution levels to be “extremely high” on days when they were in the 90th percentile of their daily average for the study’s 20-year span.)

“When we looked at satellite imagery of the whole country this past summer, we could see smoke from Western wildfires making it all the way to New York City,” Swain said. “There could be a connection with air pollution as far away as the East Coast.”

Wildfires and stagnant, hot weather patterns increase the presence of pollution classified as PM 2.5 — particles that measure less than 2.5 microns in width, the equivalent of about three one-hundredths the width of a human hair — which can make its way deep into lungs and can cross into the bloodstream. Scientific studies have linked PM 2.5 pollution to health problems such as decreased lung function, irregular heartbeat and even premature death in people with heart or lung disease.

The combination of weather patterns and wildfires also increases the formation of ground-level ozone, another threat to respiratory health. Ground level ozone forms due to chemical reactions between oxides of nitrogen (such as nitric oxide and nitrogen dioxide) and volatile organic compounds, both of which can come from vehicles, power plants, industrial facilities and other sources.

The researchers found that the increase in extreme levels of PM 2.5 due to climate factors increased hazardous air quality conditions by an average of 25 million person-days each year of the past two decades in the Western U.S. and adjacent areas of the Great Plains, Mexico and Canada. (A person-day refers to a single day of exposure by a single person.)

The analysis is based on pollution data from U.S. Environmental Protection Agency monitoring sites, as well as atmospheric observations and data on atmospheric pressure and temperatures.

The poor air quality conditions highlighted in the paper are likely to get worse for at least the next few decades, even if drastic climate change mitigation measures are implemented, Swain said.

“It has gotten hotter, wildfire conditions have gotten worse and we’re seeing more persistent periods of high atmospheric pressure,” he said. “Each of those factors is projected to increase in the coming years.”

While mitigating emissions from wildfires and climate change will take decades, cities could still enact regulations and other programs to that would help reduce the presence of oxides of nitrogen and volatile ogranic compounds — so-called ozone precursor emissions — in the near term. Although the benefits of those changes would take years to accrue, it could be practical for cities to implement emissions-reduction measures during periods of hazardous air quality, and it would likely help reduce the dangers to human health, Swain said.

Photo credit: Courtesy of Ellen Sletten Professor’s invention is a kid-friendly introduction to the chemistry of ...
Scroll to top