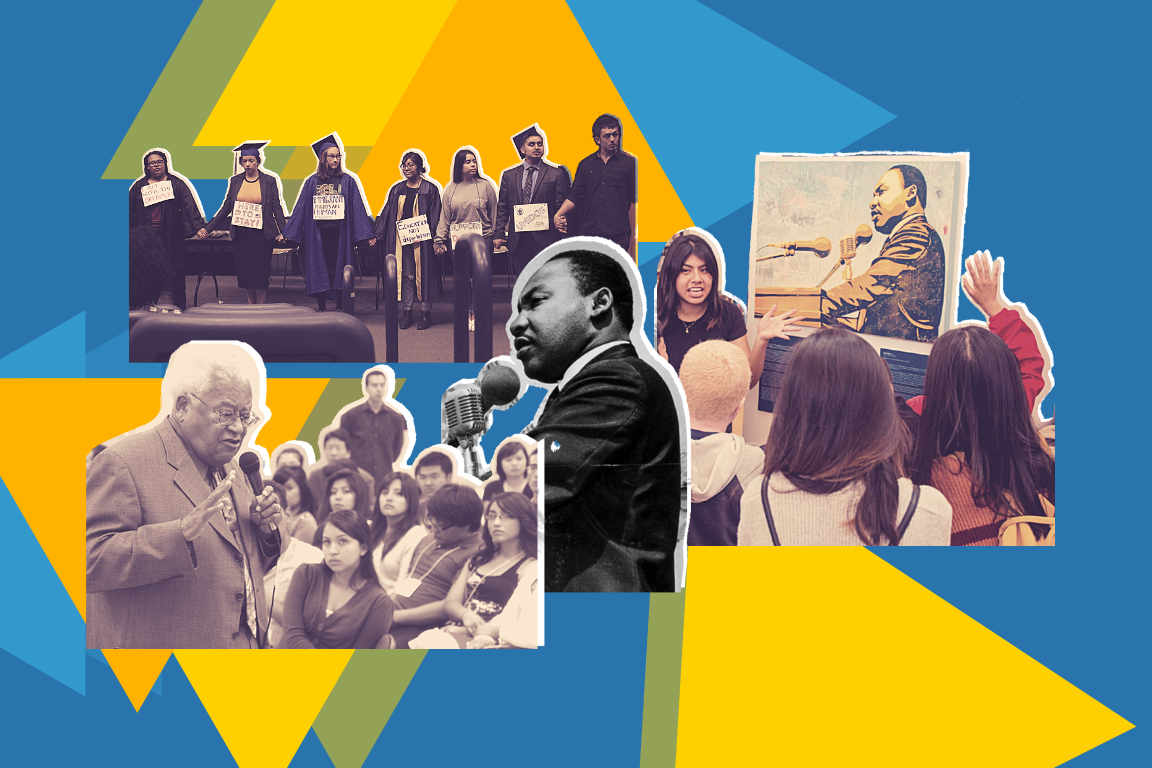 Though it’s been more than 50 years since he was killed, the teachings of civil rights leader Martin Luther King Jr. live on at UCLA, as they’re passed along from one of King’s contemporaries to today’s undergraduates.

For the past two decades, Rev. James Lawson Jr. — one of King’s close friends and fellow civil and labor rights leader, who King once referred to as “the leading strategist of nonviolence in the world” — has taught a UCLA course on King’s signature method for social reform.

Lawson, who received campus’s highest honor, the UCLA Medal, in recognition of his life’s work, co-teaches the class with Kent Wong, director of the UCLA Labor Center. “Labor Studies M173: Nonviolence and Social Movements” is part of the labor studies academic program and offered jointly with the African American studies department and the César E. Chávez Department of Chicana and Chicano and Central American Studies.

During the civil rights movement, King and Lawson embraced the philosophy of nonviolence as the most effective force to advance social, racial and economic equity in U.S. society. Together, they taught nonviolent resistance tactics to young activists, catalyzing lunch counter sit-ins, the 1961 Freedom Rides, and worker and student demonstrations that helped desegregate the South and inspired far-reaching voter mobilization efforts. In 1968, Lawson invited King to support the renowned Memphis Sanitation Strike where King was assassinated.

The class has motivated students to embrace King’s enduring legacy, while carrying on the fight for justice on campus and in the community.

“UCLA students have been inspired by Dr. King and Rev. Lawson’s teachings,” Wong said. “Many undocumented students of UCLA, in particular, have embraced the philosophy of nonviolence to win historic victories for immigrant rights, including DACA, the California Dream Act and health care access for undocumented young people.”

Students in the course examine nonviolent theory and its impact on social movements in the United States and around the globe while applying these concepts to present-day social challenges through service learning activities.

“We share a common commitment to getting the nonviolent history and theory into the public coffers where social change, personal change and the change towards equality can be made directly,” said Lawson said during a lecture last year.

Leticia Bustamante, who graduated from UCLA in 2017, said taking the class strongly influenced her academic journey and her activism. Among her most memorable class lectures was learning about King’s “Letter from a Birmingham Jail,” in which King wrote a powerful defense of a 1963 massive direct action campaign to pressure Birmingham merchants to desegregate the city during a busy shopping season. The letter is regarded as one of the most influential texts of the civil rights movement.

“For me, this letter serves as a blueprint and reference on the essentials of nonviolent action. Whether I am organizing for labor or immigration, I always keep the four [nonviolence] principles in the back of my mind,” Bustamante said. “I remind myself that the tensions we are creating are necessary. People should be made to feel uncomfortable, because progress and growth are never easy.”

Bustamante is now a master’s candidate in public policy at the UCLA Luskin School of Public Affairs and has returned to the class as a guest speaker to share her immigrant rights organizing experiences.

Last spring, when the course was moved to an online platform because of COVID-19 restrictions, Lawson and Wong identified an opportunity to share the class with a wider audience. The weekly lectures and conversations were made available in real-time and were also archived on the Labor Center’s YouTube channel.

“Rev. Lawson has deep relationships with union activists, the faith community and social justice leaders throughout the country. We thought this would be an excellent opportunity to spread his teachings on nonviolence far and wide,” Wong said.

“Our labor studies program is proud to offer a curriculum that connects students to King’s legacy and the teachings of Rev. Lawson,” said Tobias Higbie, professor of history and labor studies faculty chair. “Lawson not only inspires our students by his long career, he also challenges each of us to live up to our potential as agents of positive social change.”

This coming spring 2022, the class will explore similar themes and students will also learn about Lawson’s teachings in a new book, “Revolutionary Nonviolence: Organizing for Freedom,” to be published by UC Press next month. Lawson and Wong hope to teach the course in-person but are prepared to offer the course virtually once again if public health restrictions persist.

The transformative power of travel