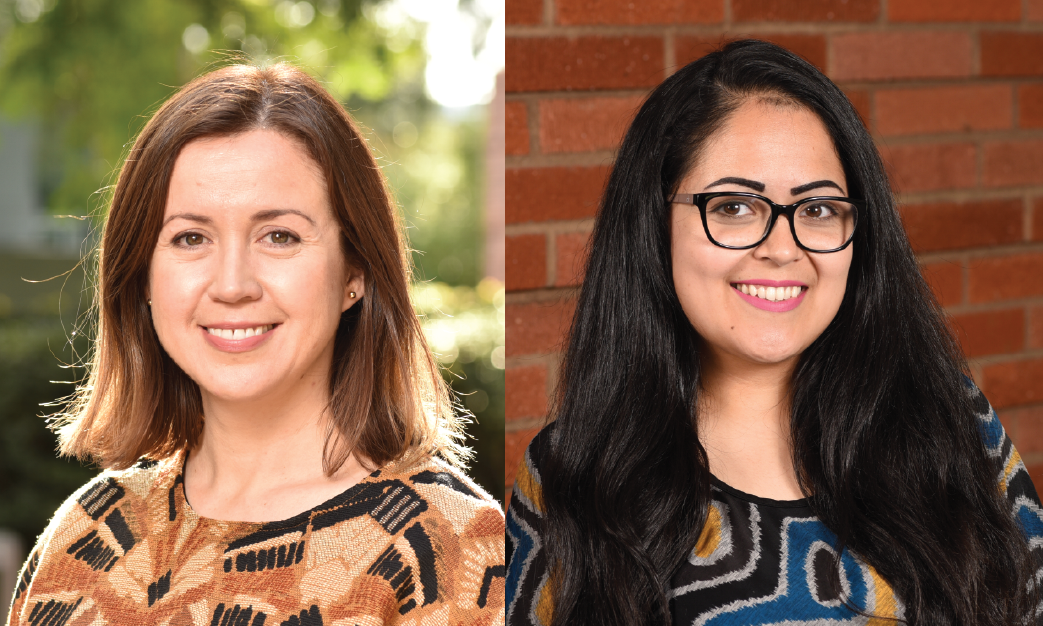 Science is anything but a solitary pursuit—breakthroughs are more likely to occur when established experts and rising scientists collaborate with and inspire one another.

Stephanie Correa, an assistant professor in UCLA’s Integrative Biology & Physiology department, and Norma Sandoval, a third-year grad student, are just such a combination. In addition to their shared love of scientific research, the two have much in common as first-generation college students and daughters of immigrants.

They work together in Correa’s lab, which aims to understand how reproductive hormones affect temperature and energy balance, and in particular, how changing estrogen levels act on the hypothalamus during menopause. For her particular project, Sandoval is focused on the role played by the reprimo gene (RPRM) in heat generation. This work could reveal the mechanisms involved in hot flashes, one of the most common symptoms of menopause.

It’s groundbreaking research, partly because for a long time, most studies were conducted on males, whether that be humans or mice. But Correa’s lab is working head-on to address the historic deficits in women’s health research, even if that means pushing against established thought.

“The effects of hormones are a lot more dynamic than we used to think, so it’s exciting whenever we interpret our data and see something unexpected,” Correa says. “We have a lot of open-minded people in the lab who are always on the lookout for results that point to bigger ideas.”

“First of all, we want to expand the knowledge of how hormones work and how their function differs between the sexes,” says Sandoval. “Ideally, one day we hope our work will have an impact on medicine—it would be great to have new drugs to treat the symptoms related to menopause.”

Correa says that Sandoval’s work could definitely lead to this. “Norma’s doing basic research to understand how the reprimogene could be mediating some of the effects of estrogens on temperature,” she says. “If it’s doing what we suspect, then this gene could be a good thing for drug developers to target. It’s really exciting to think that Norma could be the person who discovered this.”

What makes their success even more impressive is that neither realized that “scientist” was a career path open to them until they were college students—Correa at Pomona College, Sandoval at Santa Monica College before transferring to UCLA. Now, each is on a personal mission to open doors and empower others.

“I’m on the board of the Society for the Advancement of Chicanos/Hispanics and Native Americans in Science (SACNAS) at UCLA, and as outreach coordinator, I am committed to efforts aimed at broadening participation in science for historically marginalized students” Sandoval says. “Obviously, nowhere is perfect, but I feel that at UCLA, my voice is heard and I have the resources available to be the scientist that I want to be.”

“I’ve always felt that it’s really cool that at UCLA, we provide an environment where students can see representations of themselves at all levels,” says Correa.

After giving birth to twin daughters in 2016 and embarking on the juggling act necessary to simultaneously be a parent, world-class scientist, lab leader and mentor—especially in the age of COVID—Correa says she is proud of how her field continues to evolve.

“Science, too, is becoming more accepting and encouraging for people to be their full selves,” she adds. “There’s still a lot to be done to make all our environments more inclusive, but we’ve made amazing strides. And the ones who are pushing us are students like Norma.”

Although she’s still early in her career, Sandoval has already earned a slew of prestigious honors, including the National Science Foundation Graduate Research Fellowship and the Ford Foundation Predoctoral Fellowship. As she looks to the future, she’s grateful for all that she’s learning from Correa—and the feeling is mutual.

“From the first day that I met Stephanie, I was in awe of her as a scientist and as a compassionate leader,” Sandoval says. “Stephanie truly understands my struggles when it comes to research and life, and she is an incredible mentor who gives me the freedom in the lab to grow.”

“Norma’s so special, doing such exciting science and always so focused on helping others,” Correa says. “Balancing all the different things she wants to do with her life is always going to be a challenge, so I try to advise her not only on the science, but on how to make it all work—because I’m trying to do the exact same thing for myself.”

Under sea or on land, UCLA Assistant Professor Justin Dunnavant is writing the...
Scroll to top