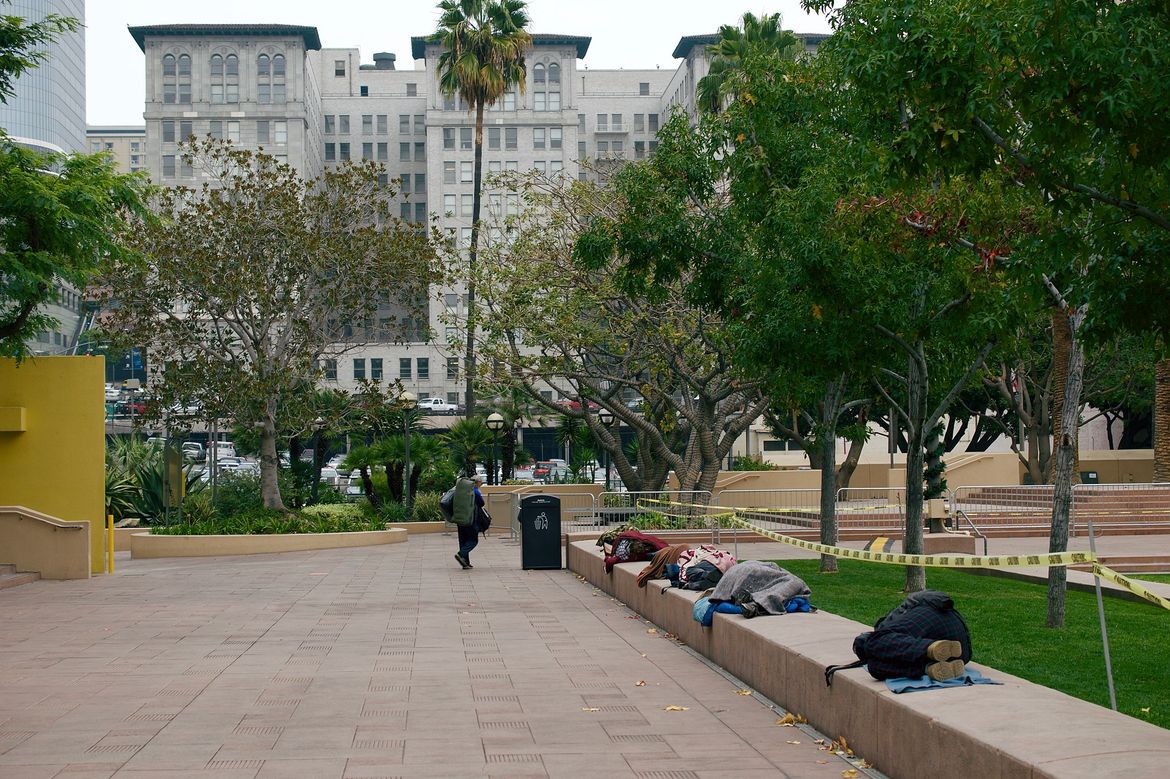 Among the recommendations in the new report: Officials must stop treating homelessness as a criminal act. (Photo Credit: Levi Clancy/Wikimedia Commons)

Homelessness in Los Angeles was already on the rise before COVID-19 struck. But the health and economic fallout of the pandemic has left many more low-income residents on the brink of housing insecurity.

While recent statewide legislation prevents evictions through June and creates options to help Angelenos pay back rent, the homelessness problem could worsen significantly as the pandemic and business closures continue.

A new report by the UCLA Luskin Center for History and Policy offers recommendations for policies that the authors say could help tackle the crisis. The suggestions are based on a wealth of insights about the history of homelessness in Los Angeles County.

The report (PDF) details a complex web of causes to this crisis, whose economic, racial, social and political roots date back to the Great Depression — many other studies on the issue go back only to the 1970s. The authors write that those factors converged to disproportionately affect people of color, particularly African Americans. While white, single, older men made up a majority of Los Angeles’s homeless population prior to the 1980s, Black and Latino people began to make up a majority of the homeless population after that.

Among the report’s chief recommendations: Officials should stop treating homelessness as a criminal act, address rental and land use policies— for example, by expanding renter protection and landlord regulations and converting unused or underused property into supportive housing — and improve residents’ access to mental health and other social services.

“The report offers deep historical analysis in centering the long-term structural causes of racial and economic inequality in Los Angeles,” said David Myers, a UCLA professor of history and director of the Luskin Center. “In doing so, it calls for a new policy approach, one that recognizes the repeated failure of piecemeal, short-term and color-blind approaches. It insists that access to adequate housing is a basic human right, not a societal luxury.”

The report reveals that a lack of meaningful coordination among city and county agencies has hampered structural changes. After years of political battling on how to handle homelessness, the city and county in 1993 jointly created the Los Angeles Homeless Services Authority. But, the report contends, even that has not led to a long-term coordinated strategy. Solutions like permanent supportive housing have yet to take hold. A 2007 permanent supportive housing program called Project 50 was largely successful but ultimately not supported by the Los Angeles County Board of Supervisors.

According to the report, the Los Angeles homelessness crisis largely began during World War II, when housing development could not keep up with the city’s population growth. A rush of federal housing development and widespread rent control was enacted in 1942 in response. But redlining and exclusionary zoning practices excluded most people of color from the postwar housing boom, setting the stage for racial disparities that continue today.

Another factor was California’s shutting down of mental health care institutions beginning in the 1950s, which left few options for indigent people with mental health challenges. Many of them ended up on the streets, in jail or cycling between the two, according to the report.

And many residents with mental health struggles continue to fall through the cracks, the analysis found, as a result of the Los Angeles County Department of Mental Health’s reliance on a patchwork of agencies to provide mental health and drug use treatment.

In addition, a focus on criminalizing people who live on the street — a trend that intensified nationally since the 1970s and still informs Los Angeles’ approach today — has not helped mitigate homelessness. A 1976 plan to prevent the expansion of Skid Row’s homeless population relocated homeless services to a 50-block “containment zone” and selective policing was used to discourage residents from leaving the zone. The plan was unsuccessful and the policy was formally reversed in 2016.

And, the authors write, the city’s 2006 zero-tolerance policy on crime on Skid Row had the effect of putting poor and mentally ill people into the criminal justice system and then back onto the streets.

The report also examines demographic trends and real estate policies that contributed to the issue. For example:

Myers said future policies must take into account the desires of homeless people themselves.

“One thing we found while looking back was the consistency with which unhoused people, across the 20th century, have proposed solutions to the problem centered on repurposing vacant land and unused or underutilized public property,” he said. “The report suggests that any policy response that doesn’t take into account the desires, demands and visions of houseless people — particularly regarding the right to autonomy and self-determination — are doomed to fail.”

Kirsten Moore-Sheeley, a visiting assistant professor of history at UCLA and co-author of the report, said the authors hope the research helps reframe housing as a basic human right.

“Looking back at almost a century of history, we indicate how intractable the problem has been and still is,” she said. “We are suggesting a need to rethink core assumptions about property and tenancy rights and, more fundamentally, who has a right to the city.”