People who don’t know Neil Garg may be shocked to learn he has made organic chemistry — the chemistry of molecules made of carbon — one of UCLA’s most beloved and popular undergraduate courses. Students wait for years to get into his class and do celebratory dances when they learn they’re enrolled.

Garg, the Kenneth N. Trueblood Professor of Chemistry and Biochemistry, recently explained how he made the subject so popular and shared some of his teaching techniques in an article published in the Journal of Biological Chemistry. In 2018, Garg became the recipient of the country’s premier university teaching award, the Robert Foster Cherry Award for Great Teaching, given once every two years by Baylor University.

His undergraduate course Chemistry 14D, “Organic Reactions and Pharmaceuticals,” is very demanding. On exams, he asks students — mostly second-year, non-chemistry majors — to solve difficult problems he did not learn to solve until his first year of graduate school at Caltech. Students, for example, are asked to create a reasonable chemical synthesis of molecules they have never seen before. By the end of his course, more than two-thirds of the class can solve these problems. 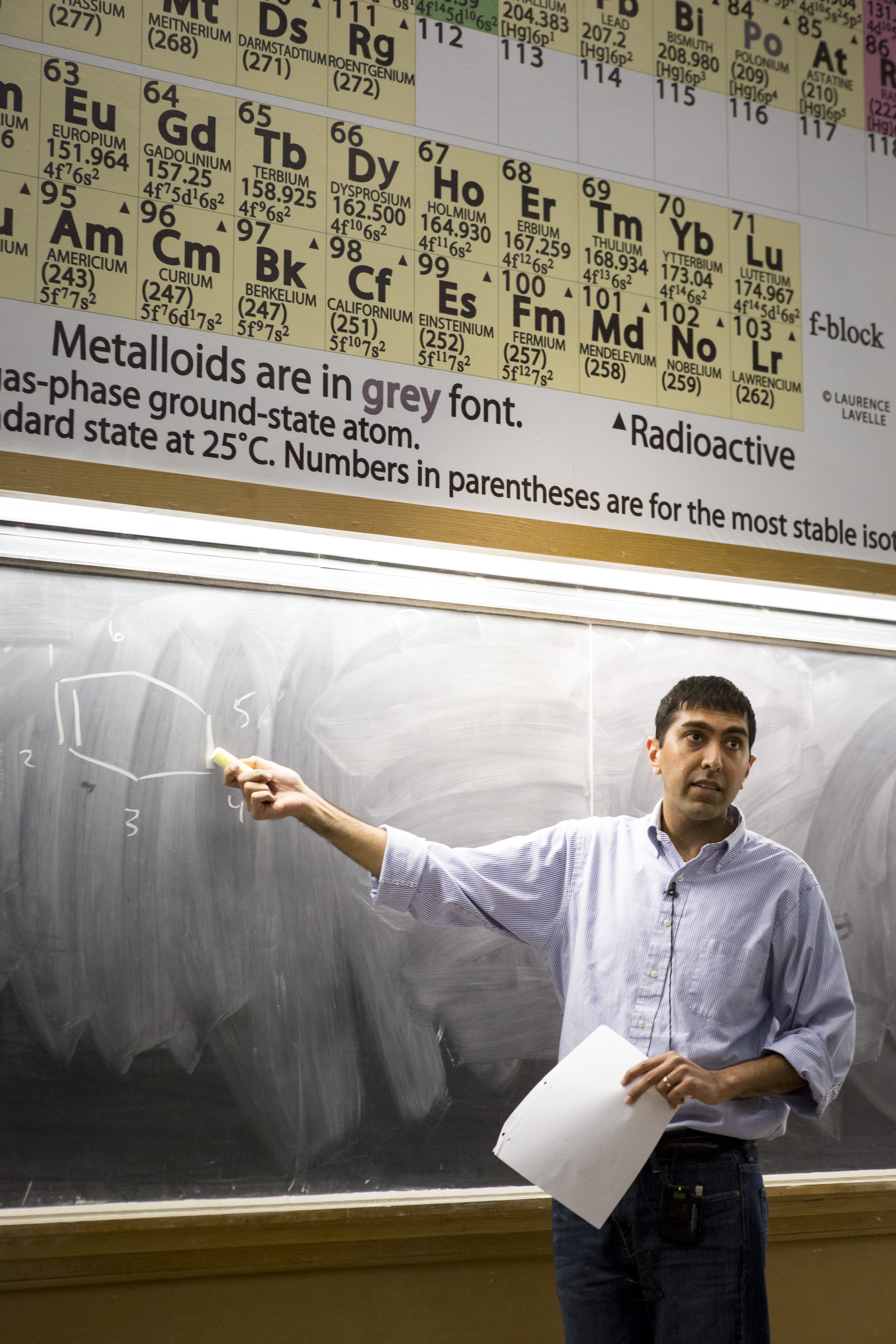 “What is also striking,” Garg writes, “is that the students show impeccable creativity in their solutions, often providing reasonable responses that bear no resemblance to what is shown on the answer key, earning full credit. … My goal is always for students to do extraordinary things and learn to solve the hardest problems I can offer.”

In the article, Garg, who is also chair of UCLA’s department of chemistry and biochemistry, but not currently teaching organic chemistry, offers more than a dozen tips for teaching complex science. Among his practices:

-It’s essential to explain the relevance of organic chemistry to students and focus the class on problem-solving, critical thinking and creativity, rather than memorization. He teaches students that for each chemical reaction, there is a logic associated with how and why the reaction takes place. One of his students said she feels “like Sherlock Holmes when solving retrosynthesis problems.”

-He and his teaching assistants continually show students how much they care. Former student Elizabeth Matusov said, “He feels like a friend who happens to be teaching a really difficult class. He’s easily the best professor I’ve ever had. I would take any class with him. We all would.”

-He learns students’ names and calls on them by name, even in a class with 400 students. He stays in touch with hundreds of his former students, including some from 20 years ago.

-He teaches the fundamental vocabulary of organic chemistry and the rules of chemical reactivity, and performs in-class demonstrations with students.

-He poses questions that students answer with clickers, so he can immediately learn what they understand and what concepts require further explanation.

-More than 1,300 of his students have teamed up to make hundreds of music videos that have been viewed around the world hundreds of thousands of times. Many of the best are in Garg’s Chemistry 14D Music Video Hall of Fame, which features such student classics as “I Will Survive,” “Alkenes Are Used for These,” “Chem 14 Dreams Mashup” and “Say Alkane.” While teaching a semester at Baylor University last year, his undergraduate students teamed up to create 37 videos, including a chemistry adaptation of ABBA’s “Dancing Queen.”

-He has created educational resources for students, including BACON (Biology And Chemistry Online Notes), a set of fun and engaging online tutorials that make connections between organic chemistry and sports, health, genetics and popular television shows, among other topics. Other chemistry resources that are free and being used worldwide are a smartphone app called “Backside Attack” that teaches organic chemistry concepts; qrchem.net; and rschemistry.com. QR Chem, a molecule visualization app created by Garg and some of his UCLA students, is being used in more than 160 countries.

Summing up his teaching philosophy, Garg asks, “How did organic chemistry become one of UCLA’s most popular classes? Teaching is all about the students. We must challenge them, support them, make them feel connected to the class and give them opportunities to do amazing things.”

In an acknowledgment at the end of the article, Garg thanks, among others, his “thousands of inspiring students.”

Garg and his family live in a campus residence hall as part of UCLA’s faculty-in-residence program, which allows him to dine with students, advise them, go on trips with them and inspire them daily with his passion for chemistry.