A team of 245 UCLA undergraduates and 31 high school students has published an encyclopedia of more than 1,000 genes, including 421 genes whose functions were previously unknown. The research was conducted in fruit flies, and the genes the researchers describe in the analysis may be associated with the development of the brain, eye, lymph gland and wings.

The fruit fly is often the object of scientific research because its cells have similar DNA to that of human cells — so knowledge about its genes can help researchers better understand human diseases. The UCLA study should be useful to scientists studying genes involved in sleep, vision, memory and many other processes in humans.

The research is published in the journal G3: Genes, Genomes, Genetics. The study’s senior authors include researchers Cory Evans and John Olson, who taught UCLA’s Biomedical Research 10H, the course in which the studies were conducted.

“I expect this will be a highly cited paper and a valuable resource to life scientists,” said Tracy Johnson, director of UCLA’s biomedical research minor, which offers the course the students all took. “It’s inspiring to know all of this really important research came from freshmen and sophomores. It’s beautiful, high-quality research.” 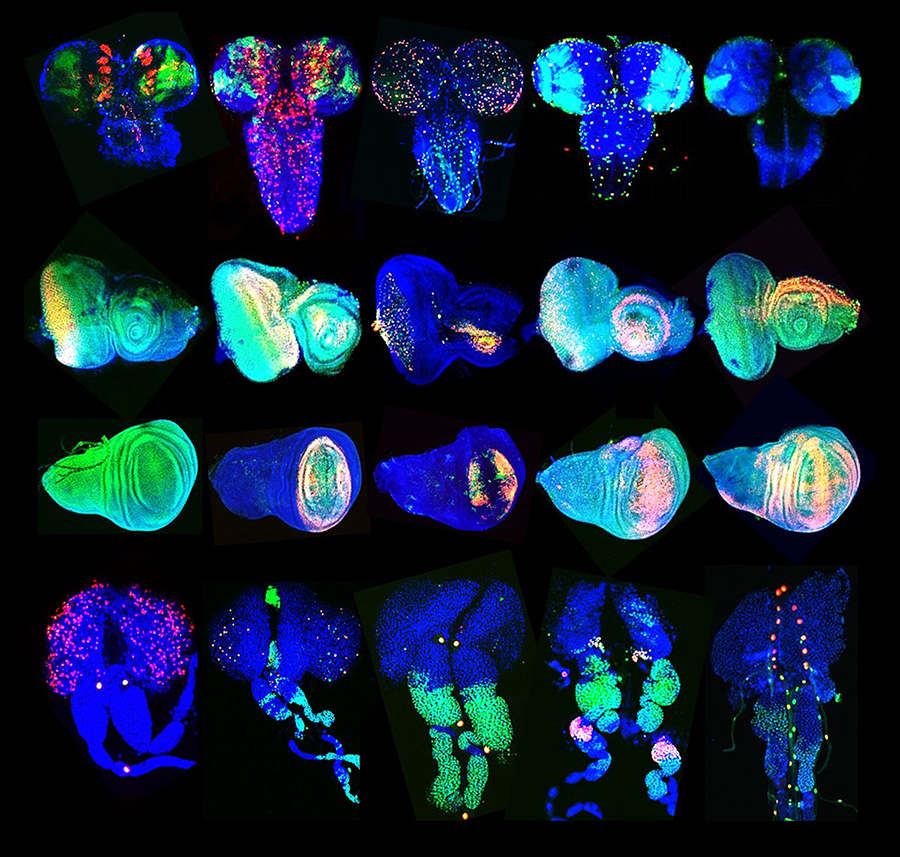 Visible on this page are images of fruit flies’ eyes (top), wings and lymph glands, showing which genes are active (red) or were previously active (green). (Download the full image to also see scans of the brain.) Photo credit: Cory Evans

Each student studied several genes, ultimately producing a total of more than 50,000 microscopic images; the researchers then posted their analysis on an online database where other scientists can study the genes’ roles.

The research was conducted as part of a UCLA life sciences course that was developed in the early 2000s by Utpal Banerjee, a UCLA distinguished professor of molecular, cell and developmental biology, a Howard Hughes Medical Institute Professor and a senior author of the paper. The course received initial funding from the HHMI.

“Research on science education says that one of the best way to teach science is by having authentic research experiences embedded in a course,” said Johnson, who holds the Keith and Cecilia Terasaki Presidential Endowed Chair in the Division of Life Sciences and is an HHMI Professor. “Professor Banerjee understood years ago when he envisioned the class that students learn more by doing science. They learn how to design experiments, how to think like scientists, how to write about science and how to present their research.”

Johnson said the approach is analogous to teaching a sport. “If a kid wants to play soccer, you don’t say, ‘Don’t touch the soccer ball yet. You have to first learn all of the rules, watch other people play and read about the soccer greats, and maybe in a couple of years, we’ll let you kick the ball.’ No, bring out the soccer balls! So we need to get science students in the lab.”

The students completed two other research projects, one of which Evans expects will be published this year. In that study, the undergraduates studied the effects of turning off specific genes in fruit flies using a scientific technique called RNA interference. They then determined which of those 4,000 genes, when turned off, affect the proper development of blood cells.

“We teach students how to do research, not fly biology,” said Evans, who is now an assistant professor of biology at Loyola Marymount University. “Their science literacy is high, and they know how to evaluate evidence.”