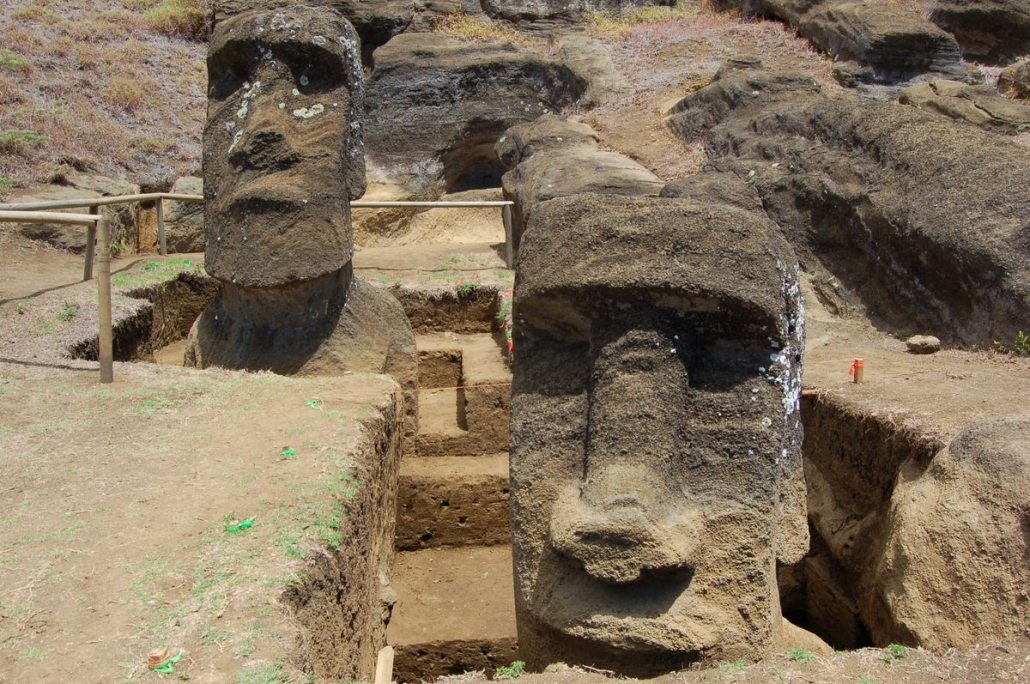 Rapa Nui (or Easter Island, as it is commonly known) is home to the enigmatic Moai, stone monoliths that have stood watch over the island landscape for hundreds of years. Their existence is a marvel of human ingenuity — and their meaning a source of some mystery.

Ancient Rapanui carvers worked at the behest of the elite ruling class to carve nearly 1,000 Moai because they, and the community at large, believed the statues capable of producing agricultural fertility and thereby critical food supplies, according to a new study from Jo Anne Van Tilburg, director of the Easter Island Statue Project, recently published in Journal of Archaeological Science.

Van Tilburg and her team, working with geoarchaeologist and soils specialist Sarah Sherwood, believe they have found scientific evidence of that long-hypothesized meaning thanks to careful study of two particular Moai excavated over five years in the Rano Raraku quarry on the eastern side of the Polynesian island.

Van Tilburg’s most recent analysis focused on two of the monoliths that stand within the inner region of the Rano Raraku quarry, which is the origin of 95 percent of the island’s more than 1,000 Moai. Extensive laboratory testing of soil samples from the same area shows evidence of foods such as banana, taro and sweet potato.

Van Tilburg said the analysis showed that in addition to serving as a quarry and a place for carving statues, Rano Raraku also was the site of a productive agricultural area.

“Our excavation broadens our perspective of the Moai and encourages us to realize that nothing, no matter how obvious, is ever exactly as it seems. I think our new analysis humanizes the production process of the Moai,” Van Tilburg said.

Van Tilburg, in partnership with members of the local community, heads the first legally permitted excavations of Moai in Rano Raraku since 1955. Cristián Arévalo Pakarati, a noted Rapanui artist, is project co-director.

The soils in Rano Raraku are probably the richest on the island, certainly over the long term, Sherwood said. Coupled with a fresh-water source in the quarry, it appears the practice of quarrying itself helped boost soil fertility and food production in the immediate surroundings, she said. The soils in the quarry are rich in clay created by the weathering of lapilli tuff (the local bedrock) as the workers quarried into deeper rock and sculpted the Moai.

A professor of earth and environmental systems at the University of the South in Sewanee, Tenn., Sherwood joined the Easter Island Project after meeting another member of Van Tilburg’s team at a geology conference.

She wasn’t originally looking for soil fertility, but out of curiosity and research habit, she did some fine-scale testing of samples brought back from the quarry.

“When we got the chemistry results back, I did a double take,” Sherwood said. “There were really high levels of things that I never would have thought would be there, such as calcium and phosphorous. The soil chemistry showed high levels of elements that are key to plant growth and essential for high yields. Everywhere else on the island the soil was being quickly worn out, eroding, being leeched of elements that feed plants, but in the quarry, with its constant new influx of small fragments of the bedrock generated by the quarrying process, there is a perfect feedback system of water, natural fertilizer and nutrients.”

She said it also looks like the ancient indigenous people of Rapanui were very intuitive about what to grow — planting multiple crops in the same area, which can help maintain soil fertility.

The Moai that Van Tilburg’s team excavated were discovered upright in place, one on a pedestal and the other in a deep hole, indicating they were meant to remain there.

“This study radically alters the idea that all standing statues in Rano Raraku were simply awaiting transport out of the quarry,” Van Tilburg said. “That is, these and probably other upright Moai in Rano Raraku were retained in place to ensure the sacred nature of the quarry itself. The Moai were central to the idea of fertility, and in Rapanui belief their presence here stimulated agricultural food production.”

Van Tilburg and her team estimate the statues from the inner quarry were raised by or before A.D. 1510 to A.D.1645. Activity in this part of the quarry most likely began in A.D.1455. Most production of Moai had ceased in the early 1700s due to western contact.

The two statues Van Tilburg’s team excavated had been almost completely buried by soils and rubble.

“We chose the statues for excavation based on careful scrutiny of historical photographs and mapped the entire Rano Raraku inner region before initiating excavations,” she said.

Van Tilburg has worked hard to establish connections with the local community on Rapa Nui. The project’s field and lab teams are made up of local workers, mentored by professional archeologists and geologists.

The result of their collective efforts is a massive detailed archive and comparative database that documents more than 1,000 sculptural objects on Rapa Nui, including the Moai, as well as similar records on more than 200 objects scattered in museums throughout the world. In 1995, UNESCO named Easter Island a World Heritage Site, with most of the island’s sacred sites protected within Rapa Nui National Park.

This is the first definitive study to reveal the quarry as a complex landscape and to make a definitive statement that links soil fertility, agriculture, quarrying and the sacred nature of the Moai.

Van Tilburg and her team are working on another study that analyzes the rock art carvings that exist on only three of the Moai.

That Supermassive Black Hole in our Galaxy? It has a Friend.