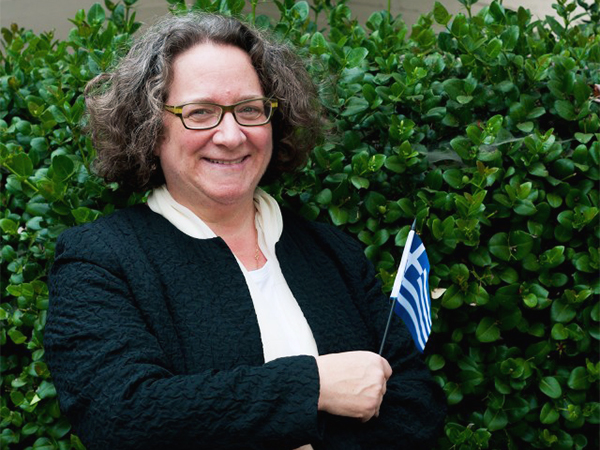 The UCLA Stavros Niarchos Foundation Center for the Study of Hellenic Culture today announced the appointment of Sharon E. J. Gerstel as its inaugural director, effective July 1, 2019. Gerstel has served as the acting director of the Center since 2017.

In her role as director, Gerstel will develop a long-term vision for the Center, building on the university’s research and teaching strengths in Hellenic studies, including the expansion of courses in Modern Greek language and culture. Under her guidance, the Center will continue to forge strong partnerships with Hellenic organizations in Southern California.

“As someone who has worked in Greece for more than 30 years and who so closely identifies with Greek culture, I am honored and excited to take on this role,” said Gerstel. “The establishment of the Center demonstrates UCLA’s deep investment in the study and teaching of Hellenic culture, but also manifests its commitment to engage members of the community in the consideration of the rich history and culture of Greece, Cyprus, and the Hellenic diaspora. I am looking forward to strengthening our connections with cultural and educational institutions in Greece and Cyprus.”

In 2019, Gerstel was honored by the American Hellenic Council and the Hellenic Society of Constantinople for her work as acting director of the Center. She currently serves on the Board of the Greek Heritage Society of Southern California.

Said David Schaberg, UCLA’s Dean of Humanities, “With Professor Gerstel’s strong leadership, I have no doubt the Center will continue to forge strong connections with cultural institutions and universities near and far to highlight the significant legacy of Hellenic culture in our world today.”

In addition to its teaching and research mission, the Center, which was initiated in October 2017 by the commitment of a $5 million grant from the Stavros Niarchos Foundation, already has become a vibrant cultural hub for the Los Angeles Hellenic community. Approximately 150,000 Americans of Greek and Cypriot ancestry live in California — more than in any other state except New York — with about half of them in Southern California, according to a 2006 U.S. Census Bureau survey.

“Professor Gerstel is a pillar for both the Greek community and Greece in Los Angeles. She is a genuine Philhellene and the most worthy person to take up the inaugural directorship of this new and important research and cultural center,” said Evgenia Beniatoglou, Consul General of Greece in Los Angeles.

Gerstel, a graduate of Bryn Mawr College, the Institute of Fine Arts (NYU), and a former student at Aristotle University of Thessaloniki, has been a Professor of Byzantine Art and Archaeology in the Department of Art History at UCLA since 2005. Prior to her tenure at UCLA, she taught at the University of Maryland and served as a research associate at the Dumbarton Oaks Center for Byzantine Studies. As a specialist in the art and archaeology of medieval Greece, Gerstel has written or edited seven books and has authored dozens of articles in the fields of art history, archaeology, history and religious studies. Her most recent book, Rural Lives and Landscapes in Late Byzantium: Art, Archaeology, and Ethnography, which was supported by a Guggenheim Fellowship and a Mellon Foundation Fellowship at the Institute for Advanced Study in Princeton, received the 2016 Runciman Award from the Anglo-Hellenic League, the Inaugural Book Prize from the International Center for Medieval Art (ICMA), and the Maria Theocharis Prize from the Christian Archaeological Society in Greece.

Her current research focuses on the church of Hagioi Theodoroi in Vamvaka, Mani, and its community. She also is co-director of “Soundscapes of Byzantium,” a collaborative, transdisciplinary project that studies Byzantine chant, architecture and painting together with modern-day analyses of acoustics and psychoacoustics. The project, funded by both UCLA and USC, focuses primarily on the churches of Thessaloniki.The original $5 million grant establishing the Center was part of the UCLA Centennial Campaign, which is scheduled to conclude in December 2019 during UCLA’s 100th anniversary year. As part of the founding agreement, UCLA is raising an additional $3 million in eternal funding in support of the Center. For more information about The UCLA Stavros Niarchos Foundation Center for the Study of Hellenic Culture, visit: https://hellenic.ucla.edu/

UCLA to expand data science use in social sciences with a boost from analytics...

UCLA psychologist on why we should embrace aging
Scroll to top