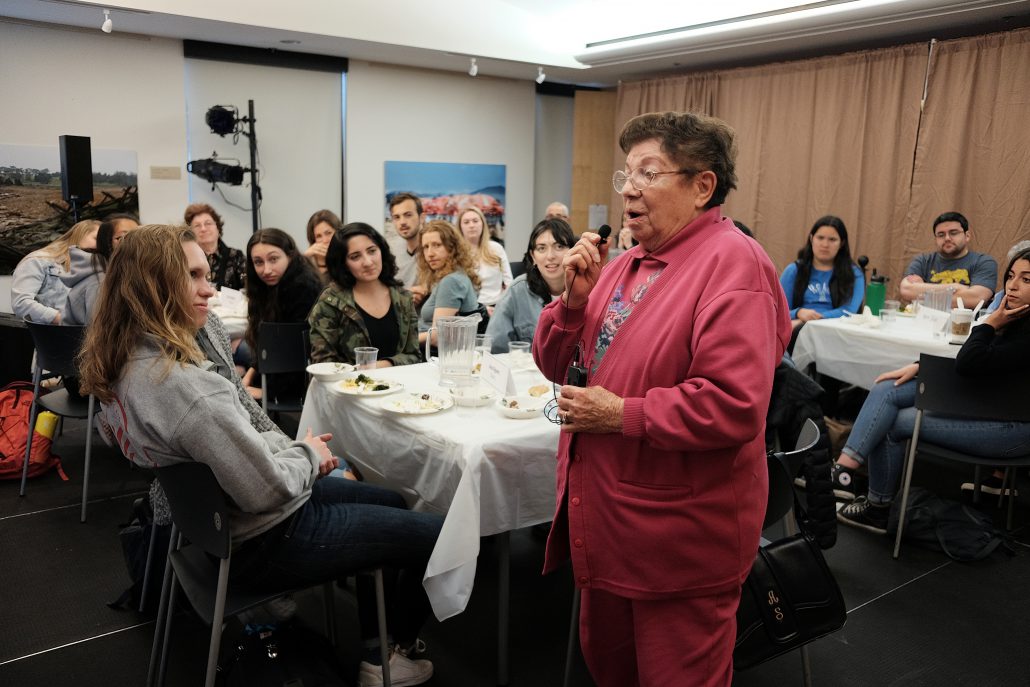 At age 15, Ann Signett was surrounded by war. Every morning she would go out on her balcony and watch B17 bombers as they flew over her hometown of Rome during World War II.

Knowing that German occupation meant death for their Jewish family, Signett’s father led them to the mountain village of Alvito, 100 miles away. There, they were sheltered by a Catholic family for 10 months.

Signett’s story is just one of the personal histories that more than 100 students will hear through UCLA’s student-run  Bearing Witness Program and the Fiat Lux seminar, “German 19: Bearing Witness: Interviewing Holocaust Survivors.”

Last quarter, Bearing Witness brings students together at UCLA Hillel for a total of four sessions to meet one-on-one with a group of 25 survivors.  The students listen, learn, record and “bear witness” to the unique histories presented to them.

With every passing year, there is urgency on the part of survivors to get their message out. The oldest is 105 and the youngest is 76.

Signett, now 89 and surrounded by UCLA students, shares her story and hopes that it is never forgotten.

“I survived because I was hidden,” she said. “But there are survivors who survived the death camps. I was never in a death camp. I was the lucky one.”

In addition to interviewing survivors, a group of 20 students are learning about the Holocaust as part of the Fiat Lux seminar taught by Professor Todd Presner, who is the Sady and Ludwig Kahn Director at the UCLA Alan D. Leve Center for Jewish Studies.

Presner has partnered with the Bearing Witness program for the past 10 years because he wants to engage freshmen early in their academic careers. As part of his seminar, students discuss historical issues and oral histories, and visit the Los Angeles Museum of the Holocaust.

Nadine Avari, a freshman in the UCLA College and originally from Pakistan, was immediately drawn to the Fiat Lux course. It offered her the perfect opportunity to interact with and learn directly from Holocaust survivors.

Before coming to UCLA, Avari says she had neither experienced much diversity nor met anyone from the Jewish community.

“Many freshmen come from really small, closed communities with narrow viewpoints,” Avari said. “UCLA is a diverse campus and hearing about the survivor’s experiences is an opportunity for students to be open and experience cultural diversity.”

Now, after studying the Holocaust in Presner’s class and hearing survivors’ personal testimonies, Avari said she feels empowered to ‘bear witness’ on their behalf.

“A lot of people disagree that the Holocaust happened,” said Avari. “And I can say, ‘No, I heard it first-hand from someone who went through it.’ No one can argue with that.”

Carol Roth, 76, is the youngest of the survivors. While Roth calls herself the “baby” of the group, she says that as long as she is living, it is her responsibility to educate a new generation as well as combat Holocaust deniers. 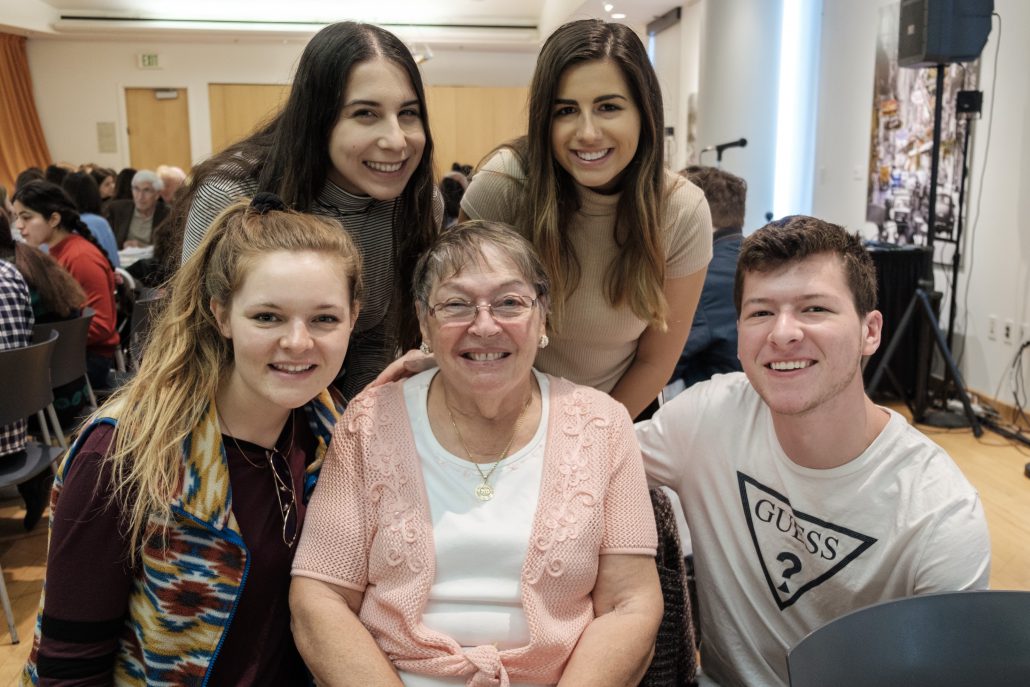 With a shaky voice, Roth tells students of the day she was walking on the beach with her husband and saw a blimp in the sky that read, ‘The Holocaust never happened.’

“I started crying because it was horrendous,” said Roth, who is originally from Couillet, Belgium. “It’s real, believe me. My mother was arrested by Nazis on the bus only because she was Jewish. They took her to the concentration camp Auschwitz. She was never heard from again.”

Sonia Khrapkova, 80, and a native of Stalingrad, Russia (now Volgograd) is also a child survivor.

In one session with students Khrapkova shared a sobering reality, “We will go, my generation,” Khrapkova said. “I’m 80 and soon there will be no people to talk to you.”

Although Khrapkova was four years old when the Germans arrived in Stalingrad, she tells students that she remembers details from 76 years ago “like it was yesterday.”

She recalls her family’s escape during the decisive Battle of Stalingrad.

“We put logs together, and we were on Volga River,” Khrapkova said. “We were running and running. The pilots were flying above us; the river was burning; the city was so slippery from the blood.” 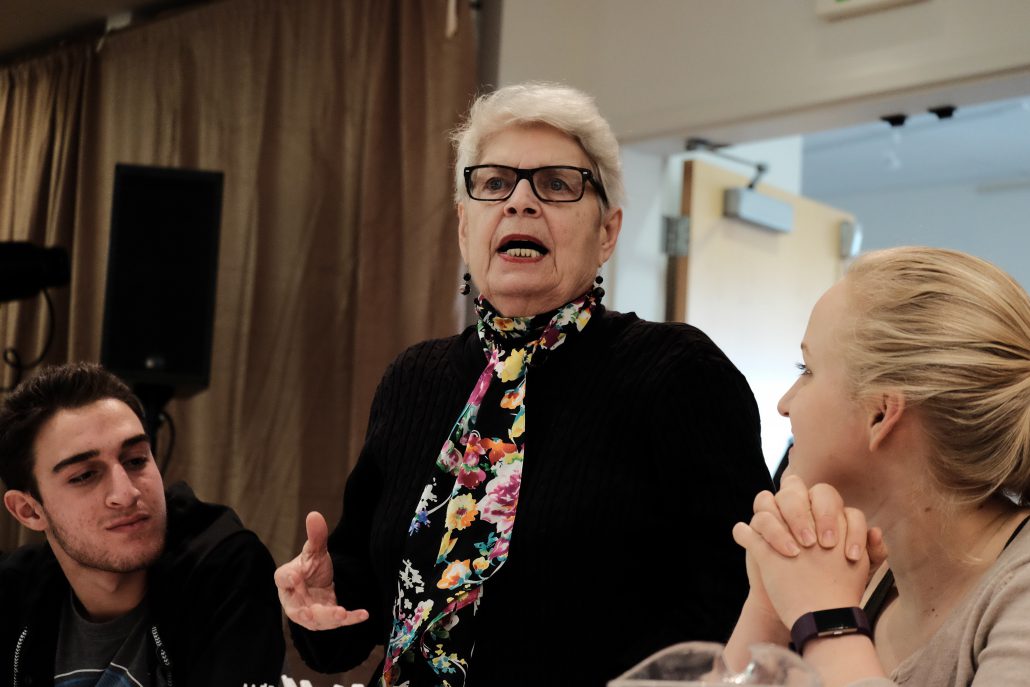 Senior Daniella Chernak, a communication major and co-chair of the Bearing Witness program, understands the importance of personally hearing stories from survivors like Khrapkova.

“We are the last generation to bear witness to survivor testimonials and stories first-hand,” said Chernak. “Day after day, week after week, survivors actively choose to relive the unimaginable hardships of their lives by sharing them with us.”

When Khrapkova continues her story, she speaks of fleeing to Kyrgyzstan and eventually the Ukraine. It was there, in a small forest, that she witnessed Jewish parents and their children digging their own graves and being buried alive.

“I remember the earth looked like it was breathing,” said Khrapkova, whose family was fortunate enough to survive.

Khrapkova’s tragic memories have endured throughout the decades and are now in the hands of a new generation.

“Hearing survivor testimonial is a constant reminder that we cannot stand idly by while others face atrocities,” Chernak said. “The hundreds of students who participate each year leave the program more open-minded, knowledgeable, and committed to stopping biased injustices.”

Today, Khrapkova says that Bearing Witness gives her hope that this period of history will not be forgotten and will live long after she is gone.

“These UCLA students brought back my faith in the future generation,” Khrapkova said. “I am proud.”

Learn more about some of the Bearing Witness Holocaust Survivor Stories:

Andrew Rosenstein ’16, captures the stories of 16 Bearing Witness Survivors through the app “Light out of Darkness” on iTunes.

See archival interviews and read about Ann Signett’s story through the Museum of Jewish Heritage.

Special thanks to UCLA Alan D. Leve Center for Jewish Studies, UCLA Hillel, Café Europa, Jewish Family Services and The Jewish Federation of Greater Los Angeles for their contributions to this article.