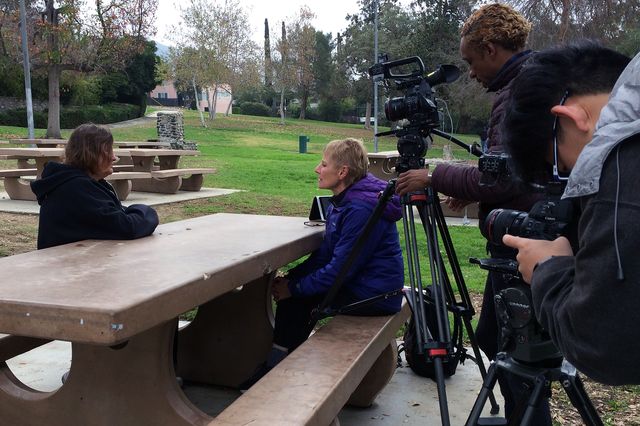 Hurricanes, floods, droughts, wildfires, extinctions: with near-constant coverage of disaster scenarios, communities around the country can be forgiven for experiencing environmental news fatigue. How can we engage 21st century audiences with new kinds of environmental stories?

UCLA’s Laboratory for Environmental Narrative Strategies is trying to do just that. In partnership with KCET, the nation’s largest independent public television station, LENS has launched a yearlong collaboration to develop models and media for reporting environmental stories. Allison Carruth, faculty director of LENS and associate professor of English, is spearheading the project, which brings together the fields of anthropology, documentary filmmaking, English and environmental science.

“The collaboration offers an opportunity for faculty and students to craft immersive narratives about regional environmental issues, translating research into public engagement with diverse audiences,” observed Carruth, who is also affiliated with UCLA’s Institute of the Environment and Sustainability.

Faculty participants in the project are training graduate students across disciplines in nonfiction narrative, journalistic writing, new media storytelling, interviewing, field research and video and audio production. At the same time, master’s students in the UCLA School of Theater, Film and Television documentary program are producing original documentary shorts under the direction of Kristy Guevara-Flanagan, assistant professor of film and an award-winning documentary filmmaker.

“My time at UCLA has taught me that how people relate to nature is not just a scientific question, it’s a cultural and political one,” said Spencer Robins, who is pursuing his doctorate in English. “It’s vital that we understand the stories people tell about their place in the natural world, and that we think about what new stories could be told. LENS and KCET have created a laboratory where we can experiment with new ways of thinking about these issues.”

“I’ve very much enjoyed the ability to focus and reframe some of the processes happening quite literally in my own backyard,” Cecale said. “I’ve also appreciated the openness and flexibility that was awarded to us as contributors.”

The first of three planned storylines will go live on kcet.org on Feb. 21. Led by Jon Christensen, LENS co-founder and adjunct assistant professor in IoES, the storyline focuses on the past, present and possible futures of Taylor Yard. Once a hub for Southern Pacific Railroad’s freight trains, Taylor Yard is now an undeveloped and still-contaminated site adjacent to the Los Angeles River. The articles, interactive web features, and a documentary short written and produced by Christensen, who also teaches history at UCLA, Guevara-Flanagan and LENS graduate students address how decisions about the future of Taylor Yard and development along the L.A. River are wrapped up in larger questions about what the future of Los Angeles should look like — and who gets a voice in determining these outcomes.

The next storyline, led by Ursula Heise, the Marcia H. Howard chair in literary studies in the English department at UCLA and who is also a member of the UCLA Institute of the Environment and Sustainability, will consider how Los Angeles has inadvertently become a sanctuary city for non-native animal and plant species that are sometimes endangered in their native habits.

The Green-cheeked parrot in Pasadena and the San Gabriel Mountains is a particularly beloved example and is the focus of a short documentary that Guevara-Flanagan and Heise are producing with UCLA graduate students in the film, television and digital media department. These species raise intriguing questions about human-created urban ecosystems, biodiversity and opportunities for creating sanctuaries for endangered species.

Heise and Christensen are also working with KCET on upcoming episodes of “Earth Focus,” slated to premiere in April 2018 focusing on the global concerns of adaptation and exploring how environmental changes are forcing all living creatures to adapt in order to survive.

This spring, a third storyline led by Carruth will investigate emerging ideas for food sustainability in California and the role of artists, writers and activists in these movements.

“Our relationship with UCLA and LENS has proven invaluable,” said Juan Devis, chief creative officer at KCET. “Their team of researchers, journalists and scientists has provided us with a new multidisciplinary approach to understanding the environment in the 21st century, helping us shape the future of environmental journalism.”