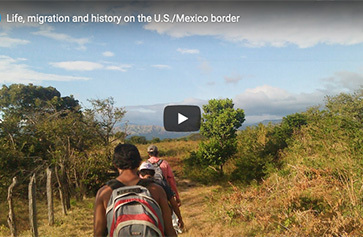 Thousands of people traverse the dangerous and sometimes fatal borderlands connecting Mexico and Arizona, bringing a few belongings, many of which get left behind to become part of the arid landscape. The seemingly quotidian personal objects they pack and lose have become part of a project meant to illustrate their humanity, their hope and inspire a rethinking of how people in the United States think about migration.

De Leon and his collaborators in the Undocumented Migration Project are calling for a moment of global remembrance, to raise awareness and stop the senseless suffering and death in the desert. They are collecting and cataloging items found in the desert, using them in an ongoing community-based exhibition called “Hostile Terrain 94.”

The attempts of humans to reach America through Mexico are politically polarizing.

“But this polarization does not negate the fact that immigration is an important part of our shared history,” said De Leon, an alumnus who got his bachelor’s degree from UCLA and earned a MacArthur Foundation fellowship in 2017 for his work.

We often think of Ellis Island through rose-colored glasses, De Leon said. We romanticize the groups of huddled masses that came to our shores seeking the American dream, forgetting they were stigmatized and unwelcomed by many of those in power who had arrived earlier.