An architectural and archival treasure surrounded by the constantly evolving West Adams neighborhood of Los Angeles, the William Andrews Clark Memorial Libraryhas been closed for more than two years fora major seismic retrofit and to bring the historic building into compliance with the federal Americans with Disabilities Act.

“The Clark is a gem and now we are letting the world know that we have restored this beautiful treasure for the 21st century, and we are going to continue to take care of it,” said Helen Deutsch, the new director of UCLA’s Center for 17th- and 18th-Century Studies and the Clark Library. Deutsch has always considered the Clark her intellectual home, having first arrived there as an Ahmanson-Getty postdoctoral fellow to work on a book about Alexander Pope.

The ribbon-cutting ceremony will include a poetry reading by Maximillian Novak, professor emeritus of English; 18th century- themed desserts made from recipes curated from the library’s collection; and maybe even some croquet on the lawn, a favorite activity of prominent philanthropist and collector William Andrews Clark Jr., who bequeathed the library to UCLA in 1934.

Clark librarians are also putting together an exhibit highlighting the history of the Clark, featuring archival photos and documents from the collection, which will be on display for the grand reopening. 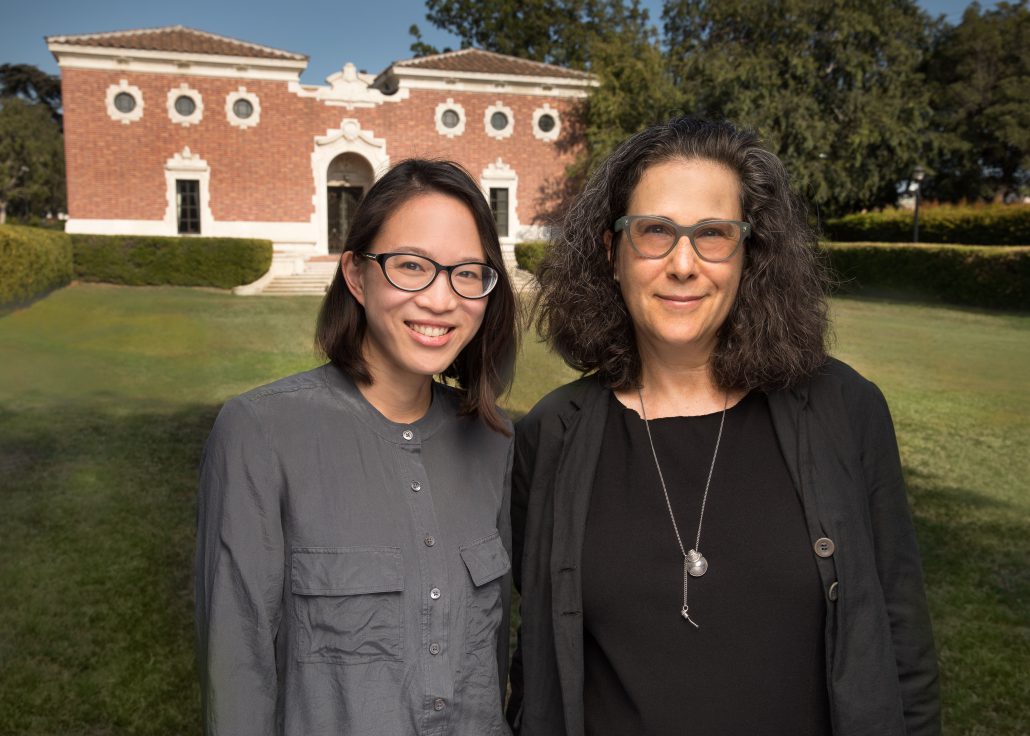 Culmination of two years of work

Retrofitting a building on the California historic registry was a massive undertaking requiring some creative problem solving. Contractors had to drill down through the roof to reinforce the building with earthquake-safe rebar. For part of the exterior of the new pavilion, they found the original brick maker, who was able to replicate the historic brickwork and unique lavender grout that is a signature of the original building. Much of the electrical system also had to be upgraded.

The project included major reinforcements for earthquake safety, as well as reallocating office spaces and building a new pavilion that allows space for an elevator and ramps that improve access for people with disabilities.

Clark staff and UCLA architects took the opportunity to make other changes as well, adding Wi-Fi access to all spaces, buildingan expanded annex to store the library’s burgeoning collection, constructing a new orientation room to introduce scholars and visitors to the Clark’s services, as well as creating a fully equipped smart classroom to facilitate interactions with the collections by students, faculty and other researchers.

The space has been sorely missed by scholars in the 17th- and 18th-century studies community, Deutsch said. She is eager to work with faculty to restore the number of fellows who work on site to pre-closure levels.

“The thing that makes the Clark very special and part of UCLA, and unlike a place like the Huntington, is that the Clark is open to the public,” she said. “Anyone can come and work here. We are open to students of any level as well as to amateur scholars, and you don’t have to have a university affiliation. We really are looking forward to welcoming everyone back.”

With the support of generous donors, staff also took the opportunity to undertake a variety of cleaning and restoration projects including the intricately painted ceilings in the Clark’s vestibule, and the two large decorative stone urns and four fountains on the grounds. A 1930s sun dial was also repaired and now hangs prominently on the new building. A new, airier lounge area for visiting scholars will be named in honor of beloved Professor Novak, who has been a fixture at the Clark for decades.

Preservation of the collections

Deutsch said she plans to continue prioritizing access, preservation and conservation of the 1926 building as well as its eclectic and prolific collections of artwork, rare books and manuscripts.

Deutsch said, “We have so much valuable material at the Clark. The art collection alone has never been fully cataloged, and a grant from the Mellon Foundation will let us begin doing that right away.”

Finishing touches are still underway, but some of the much-loved Clark events have already begun anew on site, including an October chamber music performance from the Lincoln Trio. An opera based on Jane Austen’s “Mansfield Park,” specially created for the Clark and directed by Peter Kazaras, director of Opera UCLA, was performed in June. The Clark’s monthly classical performances are back for the 2017-2018 season.

“There was a palpable sense of excitement for people to get back on the property,” Deutsch said.

As of August, the Clark also has a new head librarian, Anna Chen, who fell in love with the Clark at first sight.

“My first library job was to catalog 17th- and 18th-century bound manuscripts, which gave me a solid grounding and love for this time period,” Chen said. “Joining the Clark is such a privilege and, in some ways, a homecoming for me to shepherd the same kinds of holdings that first inspired me to become a librarian.”

Chen also is starting to think about other ways to enhance the visitor experience and effectiveness of the space, including seeking out sustainability experts at UCLA to discuss ways to manage the nearly five acres of gardens and lawns, Deutsch said.

Chen and Deutsch, along with Head of Research Services Philip Palmer and Manu-scripts and Archives Librarian Rebecca Fenning Marschall, are also keen to expand the Clark’s digitization and digital humanities efforts. A recent grant from the National Endowment for the Humanities provided $261,000 to produce digital facsimiles of 279 annotated volumes from the hand-press era (ca. 1455–1830) and make them freely available online.

Deutsch would also like to see more fellowship opportunities for grad students who are interested in librarianship.

“We have such great examples in Phil and Anna, both of whom hold Ph.D.s in literature, of how librarianship and literary studies energize each other,” she said. “Librarianship itself takes a lot of intellectual creativity and imagination.”

Where Are They Now: Kevin Brazile